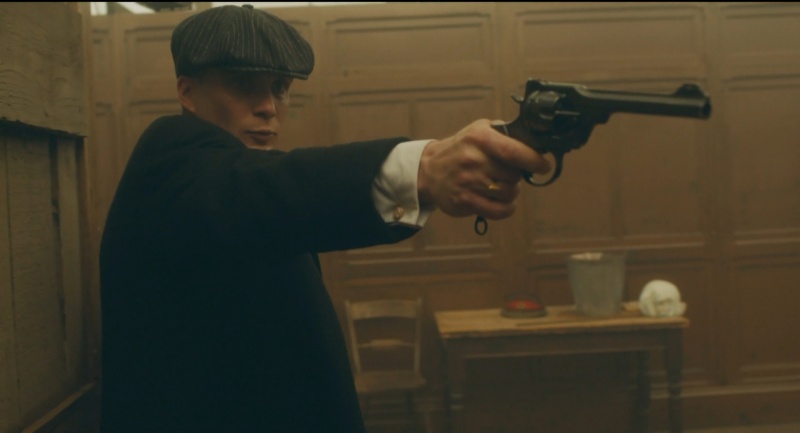 For people who have been living under a rock since 2013, Peaky Blinders is an epic gangster drama set on the lawless streets of Birmingham in the 1920s. The BBC production follows the Shelby family, fearsome gangsters led by Thomas Shelby (Cillian Murphy). Like any gangster drama, there are great shootouts, fight scenes and guns.

Now airing its fourth series on BBC Two, Peaky Blinders has proved to be a hit. One of the reasons that make it so is the historical accuracy in regard to the costume, props and guns used in the show.

There have been several eye-catching guns which have popped since the drama first aired four years ago, from the Lewis machine guns in the first series, various Luger P08 and Smith & Wesson Victory Model revolvers. But one of the most popular guns is Thomas Shelby’s personal weapon, a Webley .455 Mk VI.

Webley & Scott, formerly Webley & Sons, was a manufacturer founded in Birmingham in 1790, providing another connection to the Birmingham-based Peaky Blinders. They produced handguns and long guns up to 1979 before they switched to air pistols and air rifles. We have several Webley air pistols and Webley Licenced Replicas in store, including a Mk VI replica like Thomas Shelby’s.

Webley Revolvers, in various marks, were used as a standard issue service pistol for the armed forces in the United Kingdom between 1887 until 1963. As Thomas Shelby and his brothers served in the British army in World War One, it is no surprise that he would have such a gun in his possession, especially as the Mk VI was introduced in 1915 and adopted as the standard sidearm for British and Commonwealth troops.

The revolver fired large .455 Webley cartridges, and are among the most powerful top-break revolvers ever produced. The Mk VI had a squared-off “target” style grip, differing from “bird-beak” style in earlier marks and models, a six-inch barrel and removable front sight. Webley & Scott manufactured the pistol until 1923 at Enfield Lock in London, turning out some 125,000 Mk’s between 1921 and 1926.

Though it was declared obsolete in 1932, the familiar .455 Mk VI was still the favoured sidearm of many British officers through World War Two, with the last models retiring in 1947.