An Italian Company Are Crowdfunding a Bouncing Airsoft Mine 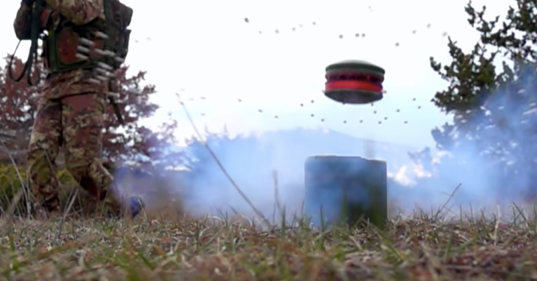 There are companies who are constantly looking at ways they can influence the world of airsoft, and Italian company idea3Di are looking to do just that with their latest invention, which they are claiming is the world’s first airsoft bouncing mine system.

For those who are unaware, the bouncing mine system pretty much does what it says on the tin. When triggered, the body of the mine is propelled into the air, spraying fragments out around waist height. The system was originally developed by the Germans during World War II and was known as the S-mine, or the Bouncing Betty (Call of Duty players will know how annoying these little blighters are!).

This original design has led to many countries developing their own variations of the mine, and now an airsoft version is looking for backers to invest. Enimine is looking to fill the gap in the market left by unrealistic airsoft landmines with their version.

Enimine can detect movement which will cause the mine to detonate, but it also comes with a remote control which can be used to set it off from a distance. It is comprised of the bouncing mine, launch base and the remote control, and operates with the use of microwave radar.

The radar can be activated with the remote and can detect movement of up to 5 metres from any direction. Upon detection, the mine detonates, firing into the air and spraying out BBs in all directions. These BBs are shot out using gas (the very same stuff you use to fill up your gas-powered airsoft guns) and can cover a radius of around 7-metres.

The mine can also be deactivated with the remote control and moved to a better location if you so desire. The launch base of the mine can be buried up to around three-quarters, helping to keep it hidden from your enemies. The microwave radar can also work through relatively thin surfaces, so you can cover the remainder of the mine with leaves, and it’ll still detonate!

The launch base is also powered by rechargeable 7.4v LiPo batteries, so you can use your pre-existing AEG charger. The battery itself should last for around 60-80 detonations, giving you plenty of time between charges to ambush your enemies. The mine can take a maximum of 92 BBs per load, so should offer plenty of opportunities to hit those who come near enough to detonate it.

If you are interested in signing up and becoming a backer for the Enimine, you can check it out on Indiegogo here. They are currently offering the device at half what it will retail for once it’s in development, so if you are keen, you’ll need to act fast as there’s only around a month left!

However, it must be noted that funding a product in this manner doesn’t always guarantee that the final product will be built and delivered; but we can hope and pray that with enough backing, these beauties will be buried around skirmish sites in the not too distant future!

Take a look below for a video of the mine in action: