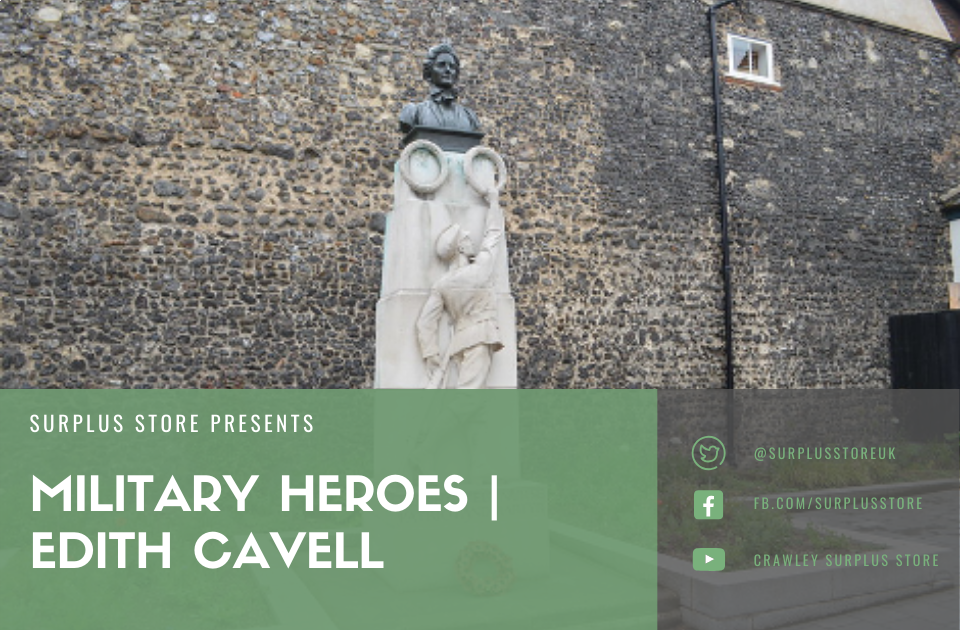 Every year between 1914 and 2015, the UK’s military was involved in some form of conflict or warfare. Processing that the UK has had a turbulent century of unrest with the the world can be overwhelming.

Amongst the disturbing horror and hopelessness of war, we can uncover inspirational stories of humans who have shown true courage and bravery when maintaining their humanitarian values to protect the lives of others.

In our Military Heroes series, we look at the compassionate work and care provided in World War One by the English-born nurse, Edith Cavell. Despite her heroic action during the war, Edith was killed as punishment. Below, we shall explore her life and the legacy she left behind.

Who was Edith Cavell?

Edith Cavell is known for removing prejudice when providing medical care to both allied and enemy soldiers during World War One. The evening before German soldiers executed her, aged 49, she famously declared:

“I realise that patriotism is not enough. I must have no hatred or bitterness towards anyone.”

Her determined words can be found on her memorial stone in Trafalgar Square, London. Not only did she provide non-discriminatory medical care, she also helped over 200 allied soldiers to escape German forces while living in Belgium.

A Brief Timeline of Edith Cavell

To understand more about Edith Cavell, below is a brief overview of her life and the defining moments which contributed to her memory today.

Where was Edith Cavell From?

On 4th December 1865, Edith Louisa Cavell was born in a small English village called Swardeston, just outside of Norwich. She was the daughter of a Reverend and was the eldest sister of three younger siblings.

What Inspired Edith to Become a Nurse?

In her early life, Edith went to Belgium to complete a job as a Governess. However, during her time away, her father suffered a severe illness after which she returned to her home village to help support him during his recovery.

It is believed that from this experience, Edith decided to pursue a career in nursing. Her nursing education started in 1896 when she began training at the Royal London Hospital. She was taught by the senior nursing professional Matron Eva Lückes, who was also a companion of the well-known Florence Nightingale.

Her Move to Belgium

In 1898, her nurse training was complete, and Edith returned to Belgium, where she accepted a nursing job to care for an ill child. Her achievements didn’t end here; she also progressed as the Matron of L’École Belge d’Infirmières Diplômées, which was also Belgium’s first nursing school.

Edith’s Role in World War One

While attending a family visit in the UK, the announcement of World War One altered the world, and Edith returned to Belgium to continue her duties as a nurse.

Her priority was to care for every single injured human who made it to the hospital, regardless of which side of the military they fought for.

The decision caused issues of controversy, as some felt that she should not be supporting and caring for enemy Austrian and German troops, but this did not deter her.

Not only did she provide non-discriminatory care for all wounded soldiers, but she was also partly responsible for successfully smuggling allied soldiers to the neighbouring, neutral country of Holland. Her commitment resulted in protecting an estimated 200 men’s lives.

Unfortunately, Edith was eventually arrested for her involvement in saving allied troops, and she was put in an intense period of investigation at the hands of German authorities. She, along with some of her associates, was trialled and Edith was convicted of treason. Her punishment was execution.

Upon hearing the news of Edith’s sentence, an outcry and condemnation from across the world demanded her release. However, this plea was ignored by German forces. On 12th October 1915, her execution was complete, as she was killed by firing squad.

The shock of her unjust punishment caused widespread press attention, and her face and inspirational actions became a propaganda tool in the war effort.

Two years after her execution, The Mirror and The Daily Telegraph newspapers joined forces to create a fund in honour of her memory and incredible dedication to look after both allied and opposing troops. The fund was eventually named the Nation’s Fund for Nurses and is now referred to as the Cavell Nurses’ Trust.

Edith’s acts of courage in not only nursing without prejudice to both allied and opposition during World War One but also smuggling allied soldier is an incredible part of wartime history. Who is your favourite military hero? We would love to know; why not share your thoughts on our social media channels?

Surplus provides high-quality airsoft pistols from the beginner models of plastic springer ranging all the way to the more advanced purebreed Tokyo Marui Next Generation Recoil guns. Please contact us for more information; we would love to hear from you!