A Beginners Guide: 5 Real Life Tactics You Can Apply to Your Airsoft Game 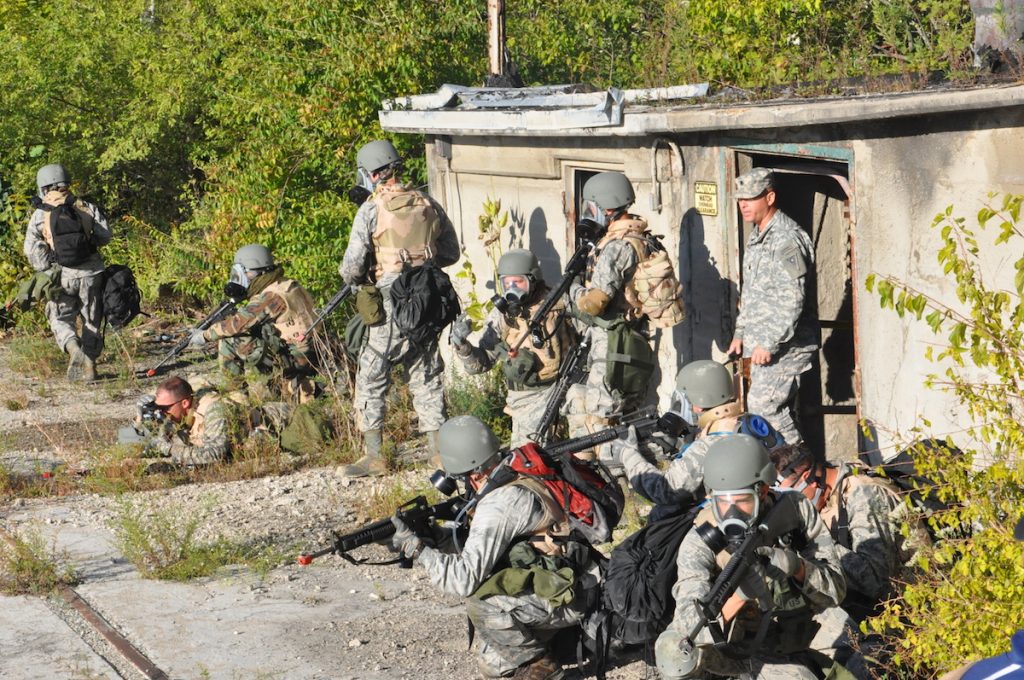 As airsoft evolves, many avid players like to incorporate realism into their gameplay. Many players enjoy acting out scenarios, as this can make the gameplay much more interesting as well as fun!

If you play airsoft often, you will know that there are usually two types of airsoft teams, the first being the ones who just do it for fun, or those who fight their way towards a purpose and have a strategy in place as well as tactics. There isn’t anything wrong with either approach, and you can play the game however you want. However, when these two teams play each other, you can bet that the one with the thought-out strategy will usually come out on top.

If you are just starting out in the world of airsoft, it is important to have tactics in place which will help you win your games! However, it is also essential that you know how to play safely and know what to look for. For example, chances are the reason the one guy in the photo above without eyewear is because this is a blank-firing exercise (even though we'd advise to keep eye protection on at all times!).

So, with this in mind, we have put together some tactics to help your team come out on top, as well as incorporating some realism into your games!

When using grenades during gameplay, many players will often throw it towards the opposing team and let it do the work for you. However, many experienced players will follow the grenade to the area where it has landed. This is because a grenade can often cause panic and disorientated players and can be a great way to pick up some easy kills!

If you are on the defensive side and a grenade lands near you, take some time to assess the situation; you can often find out where the grenade has come from and work out where the opposing team is. If you work this out, you can be more prepared for the attack and gain the upper hand.

Fire and move is a tactic which originated from artillery fire, and when they would fire, the trail would leave a path right to where it was fired from, and this would show the enemy an exact location of where they are! The firer would then have to move pretty quickly to avoid being fired on!

This tactic can easily be applied to your game, as when you make an attack, you should then move from your position, as the enemy may know where you are. If you decide to throw a grenade, you should also move position as another player may have seen exactly where it has come from, so it is better to move position. If you can’t completely move your position, just try not to appear in the same spot; just try and change the height you are firing from or which side of the cover you appear from.

Additionally, you can try and fool your opponents into thinking that you are somewhere completely different! If you have given away your position to the enemy and they have seen you move, then you can always double back and re-use the same position without being seen! This can trick the other team into thinking that you have moved, when you are, in fact, in the same position.

As a team, you will be involved in defending and attacking, but there might some of your team who are stuck under enemy fire and can’t move. However, if you use the tactic of ‘fire and movement’, part of your team can fire at the enemies’ position making them take cover, then the rest of the team can move to a better position!

Envelopment is a simple tactic but works really well! So, instead of hitting the enemy head-on, just try and take a different route and surprise the enemy on the side or behind.

All this tactic takes is sneakiness to get past the enemy’s flank, or alternativity fighting your way through the flank forces and then doubling back to assist the central column from behind. This can either be done on one side, or on both!

This another simple tactic which isn’t often carried out by airsoft novices or even overly keen players. Patrol spacing is basically the distance you leave between you and the player in front of you as you move towards the enemy’s position.

When playing airsoft, many players end up being grouped together, and this can lead to a lot of players being taken out with only a few shots or being hit by a grenade! That is why it is a good idea to keep a larger space between you and your team, depending on your surroundings. It is just as important that you ensure the enemy can’t take a few players at once with such little effort!

These are just a handful of tactics which can be used in your airsoft gameplay, all of which are pretty effective! However, to really up your game, it is important that you have all of the right kit. We have a great range of airsoft guns which are perfect for all types of players, so be sure to take a look around!

Have you used any of these tactics before, or have we missed a good one? Let us know using our social media platforms!