History of the M16: How it Became One of the Most Popular Rifles in the World 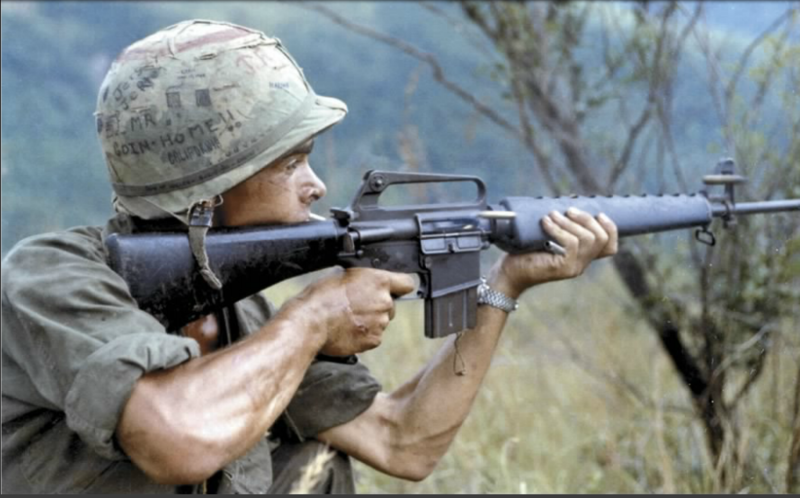 Next up in our gun history series, we take a look at the M16 rifle. The M16 is a military adaptation of the ArmaLite AR-15 rifle and is sometimes referred to as the “Vietnam rifle” due to its use in the Vietnam War.

But despite its popularity and wide-spread use today, did you know the M16 was originally not meant to be? We take a look at the history of gun that has gone on to be one of the most popular airsoft rifles to date:

The idea for the M16 first began during the Korean War, which took place between 1950 – 1953. The American infantry was looking for more firepower than the M1 that they were using and wanted something that could be easily fired while compensating for the lack of accuracy from the shooters.

A trained soldier could fire around 50 rounds a minute with the M1, but that was not nearly enough when faced with thousands of enemy troops bearing down on your position. The continued use of the M1 stemmed back to World War I when the military tactics involved long-range fighting with long-range capable weapons; essentially, one shot was enough.

But when the conflict in Korea kicked off, this theory was put under the microscope. It was found that the majority of the infantrymen would wait until their target was within 200 yards of them to engage, which went against what they previously thought.

In other words, it soon became clear that a long-range weapon was not as needed as first thought. Instead, something new was needed, and that’s where the M14 came in. The M14 was similar to the M1, but it had a 20-round magazine and a full-automatic firing mode. However, when in full-automatic firing mode, the recoil was quite difficult to control, and follow-up shots were not as accurate as the first ones.

Even in the hands of trained soldiers, the full-auto mode was an issue, but in semi-automatic, the M14 was a definite improvement on the M1.

Eugene Stoner and the AR-15

In the 1950’s, Eugene M. Stoner was the chief designer and engineer at ArmaLite, a division of Fairchild aircraft. Stoner had the idea to take the lightweight materials that were being used in the aircraft industry and to use them when making firearms. This led to the use of aluminium alloys, fibreglass and other lightweight materials being used in the production of a new assault rifle; the AR-10.

It wasn’t long before the AR-10 caught the eye of the U.S. Army. Thanks to its versatile design, 20-round magazine, the fact it chambered 7.62mm rounds, and it was very lightweight (weighing just over 3kg), they soon came sniffing around the AR-10. But despite its many positives, the Army chose not to develop it, and instead stuck with the M14. 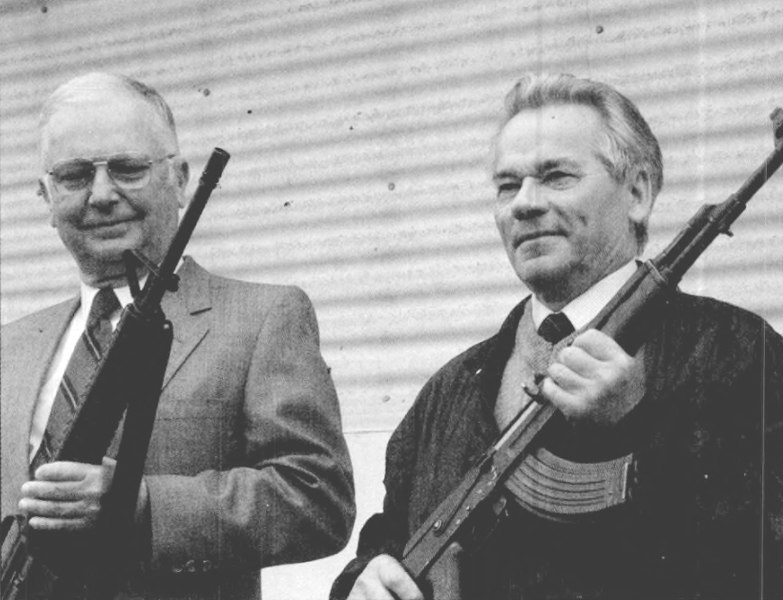 Later in 1957, a four-star general from the U.S. Army paid a visit to the ArmaLite facilities, where he told Stoner that he was interested in developing the AR series for the military. General Wyman asked Stoner to join a weapons program, for which he would offer ArmaLite financial support for future development of the rifles created, as long as the Army had proprietary rights to the final product.

It was this request from Wyman that led to the creation of the AR-15, a new assault rifle comprised primarily of fibreglass and aluminium. It also has semi and fully-automatic firing capabilities, could chamber a 25-round magazine and had a sophisticated gas system that powered it.

The major pull of the AR-15 was the weight. As it was extremely light, it meant soldiers could carry it with ease. Not only this, but they could also carry much more ammunition – three times as much in fact – than the M14.

But there were a few downsides. There were components made from bakelite, which was extremely light, but very fragile. Bakelite made up the grip and the handguard around the barrel, which reduced weight but severely compromised reliability. The original AR-15 also chambered smaller .22 calibre bullets, which led to a shorter ballistic range and ammunition that was more susceptible to interference of weather conditions.

In 1958, General Wyman ordered the Army to conduct the first tests on the new AR-15. Stoner himself hand-delivered the guns for testing and offered training for those taking part in the tests. There were some initial faults found in the AR-15 system which led to some changes. These included replacing a one-piece handguard with a two-piece triangular one, reducing the magazine capacity to 20 rounds, reducing the trigger pull to seven pounds and a change to the settings of the selector lever.

This version of the AR-15 was found to be nearly three times more reliable than the M14, but despite this, it was passed on. It was obvious that the AR-15 had massive potential but had a tough time of getting the approval of the Army Ordnance Corps, who once again passed up on an AR model. They believed that issuing a smaller calibre weapon would be a step backwards, not forwards. Plus, they did not like the idea of a weapon designed by an outsider; they wanted the troops to be using rifles that were created in-house.

In July of 1960, Air Force General Curtis LeMay was attending a Fourth of July celebration where he saw a Colt salesman place three watermelons on a firing range at distances of 50, 100 and 150 yards. He then handed LeMay a loaded AR-15 and told him to try it out. Following this hands-on test, LeMay ordered 80,000 rifles on the spot! But his order was initially blocked by Congress.

While this was happening, Colt contacted the Ordnance Corps and wanted to show the improvements they had made to the rifle since their first was rejected. This re-test was finished in November 1960, where it was concluded that the AR-15 was superior to all competitors, including the M14. This led to the rifle being approved for Air Force trials.

Meanwhile, General LeMay was still trying to get his request for the rifles approved, and it took him three attempts before such a thing happened. Eventually, 8,500 AR-15 rifles were approved for the Air Force to test, pending approval from Congress… which they withheld! LeMay even tried taking his issue to President Kennedy, but this ended without success. Finally, in May 1962 with things heating up in Vietnam, the purchase was approved.

A U.S. Army research operation meant around 1,000 AR-15 rifles ended up in Vietnam and dispersed across the country. One of the groups who received a batch of these guns was a troop of Rangers who were operating in South Vietnam. They used the AR-15 under combat conditions – the first time this had been done - and noted that it was a pretty handy rifle. 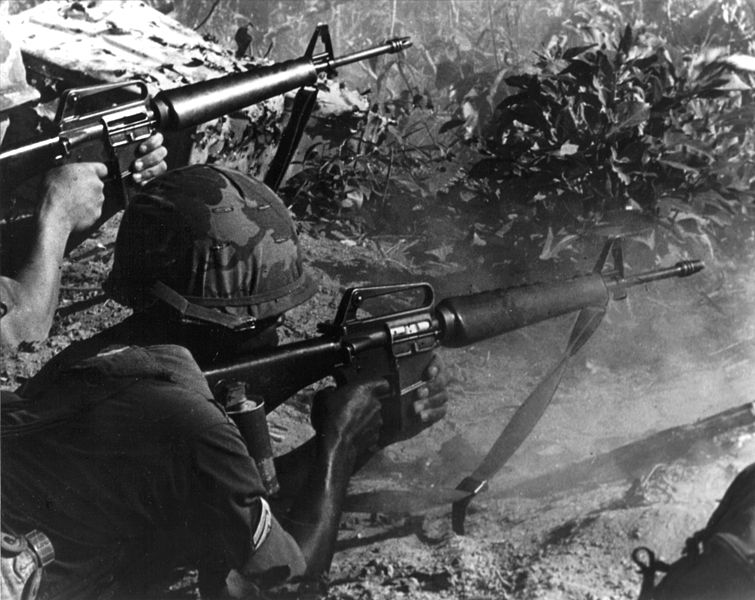 Word of the rifle spread across Vietnam, with troops who were using it praising its automatic-fire capabilities, its accuracy and how lightweight it was. This soon got back to the new Secretary of Defense, Robert McNamara, who saw a great opportunity to mass-produce the AR-15. He insisted that it was distributed to the troops immediately, and those above him had no choice but to listen.

The military version of the AR-15 was renamed the M16, and with the name change came some other tweaks. The cartridges were changed to take ball powder as opposed to stick powder, which gave the M16 a bit more power and range. A three-pronged flash suppressor and a thicker barrel were also added to help further improve the rifle. However, there were those who weren’t fully sold on the rifle, with some thinking that too many tweaks had been made, which explains Sgt. Maj. Basil Plumley (Sam Elliot) in We Were Soldiers, said it: “Feels like a BB gun to me. Believe I'm gonna stick with my pistol”!

But no sooner had more M16s been issued, problems started to arise. The rifles were jamming, and the troops were not happy with the performance of the M16 due to this issue and the fact that they had not been sufficiently trained in using the weapon. The Army didn’t even issue cleaning kits to the soldiers, claiming that the M16 was the world’s only self-cleaning gun! 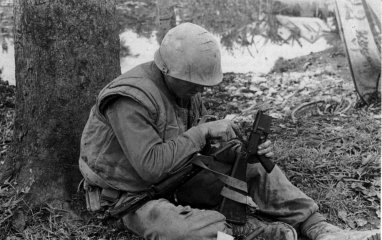 It turns out that a major part of the guns jamming was due to the change in gunpowder. To combat this, cleaning kits were issued, and new M16s were fitted with chrome inner barrels which helped to prevent jamming. By 1967, those arriving in Vietnam experienced very few problems with their guns, as long as they kept them clean and in good condition. When the Americans left Vietnam after the conflict, the M16 was well-known around the world as an effective and combat-tested rifle, which is one of the reasons why it has remained present until this day.

Since the M16 left Vietnam, there have been further updates and changes. These are:

1980 – Present: M16A3 – pretty much a full-auto version of the A2 which was issued to Navy SEALs. It is still in very limited service today.

1997 – Present: M16A4 – very similar to the A2 but is fitted with a MIL-STD-1913 rail which allows sights, optics or a carry handle to be fitted. Firing modes are safe-semi-burst, and all military A4s are also equipped with an M5 RAS handguard which allows for lights, grips, lasers and other accessories to be attached.

So, what of the future of the M16? In 2015, the military announced that they would be moving away from it in favour of the M4 (which has a rather extensive history of its own, so stay tuned!). Reasons stated for this include the outdated fixed stocks and 20-inch fixed barrel, and the fact the M16 is a bit clunky now; both the design and the three-round burst fire.

However, the M16 has cemented itself in history as one of the most popular assault rifles of all time and set a precedent against which many others will be compared now and well into the future.