A Real-Life Jurassic Park: Would the Dinosaurs be Bullet-Proof? 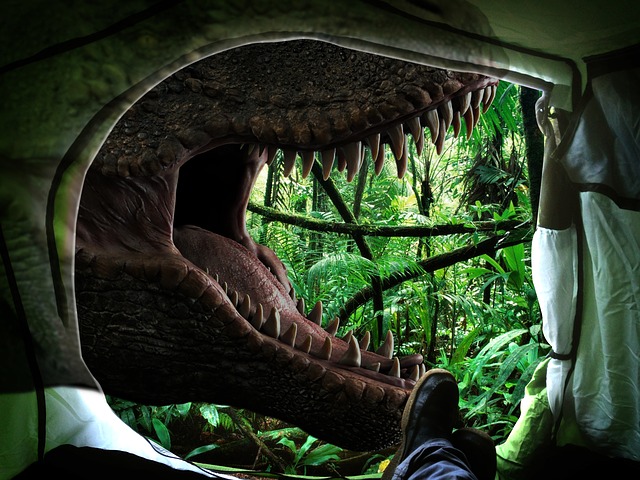 Something which has been all over the internet of late is the new Jurassic Park movie- Fallen Kingdom. The film recently smashed the $1 billion mark at the global box office within a month of its release, making it the 35th movie ever to reach this achievement. This comes as a great gift for the movie franchise that will hit its 25th anniversary this month (with the first ever Jurassic Park released into cinemas on the 16th July 1993).

Seeing as we’ve talked a lot about what to do in the case of a zombie apocalypse here at Surplus Stores, we started to wonder if zombies wouldn’t be the cause of our demise at all. But, in fact, the creatures of our own creation, in some twisted Frankenstein’s Monster-esqe world, would end us- especially as we review all the latest murmurs about whether a real-life Jurassic Park could be scientifically possible in the near-future.

Of course, messing around with the DNA and allowing visitors to get close to long-extinct animals sounded like the great premise for a theme-park- but, in ‘reality’ (well, sci-fi movie reality, to be precise), it was the recipe for disaster, leading to several casualties and a terrifying fight for survival from some of history’s most notorious monsters. The movie showed us what a lack of forward-thinking of the consequences of our selfish actions would result in, and perhaps in 1993, we couldn’t comprehend such a park existing- allowing us to sleep better at night. Fast-forward to today, and real-life science is getting closer to making resurrections of extinct species a possible reality.

As you read this, scientists are working tirelessly to bring mammoths back to life utilising gene-editing techniques to mix mammoth DNA with elephant stem cells to develop a woolly mammoth embryo. The lead scientist believes that within two years it would be possible to grow a functioning woolly mammoth/elephant hybrid in an artificial womb.

With news like this, it’s no surprise that the science advisor behind the Jurassic films, Dr Jack Horner, says that the science in cinema is not as far removed from reality as we may think. Is this essentially giving the nod that Jurassic Park could one day become our reality?

This got us thinking… what on Earth do we do if these terrifyingly huge monsters break from labs and start terrorising cities in a Godzilla-type fashion? If the Fallen Kingdom is anything to go by, there’s hope, but is that just the cinema needing to show humans conquer all? Even then, the Fallen Kingdom depicted ‘bullet-proof’ dinosaurs, indicating that science-hybrids will have some sort of superpowers… now that is some scary stuff!

As character Owen Grady (Chris Pratt) fires multiple rifle shots at the unusually-named “Indoraptor” (Tyrannosaurus rex and Velociraptor hybrid), the dinosaur seems unharmed by the bullets. Just like the human-made Indominus rex from the first Jurassic World, it appears that the genetically modified dinosaurs seem to be resistant to gunfire.

Is it just the human-touch that makes dinosaurs bear armour of steel? Or is there more to the concept than entertainment purposes- could dinosaurs have actually been bulletproof in the past?

Well… before you all start panicking… according to paleobiologist and dinosaur expert at the Canadian Museum of Nature, Jordan Mallon: “[it all] depends on what kinds of bullets you’re shooting at them.”

“If you shoot a little .22 at a big moose, you’re probably just going to make it angry. But if you shoot it with a rifle round, then you’re going to kill it. I suspect the same would be true of dinosaurs.” Hmm… a moose to a dinosaur is a bit of a jump… but we see his point!

Just as the type of bullet would matter, so would the genetic make-up of the dinosaur. Some dinosaurs would have been built to withstand more “attacks” than others (and arguably, could have withstood gunfire more effectively).

The Ankylosaurus, a dinosaur that could be classed as a ‘tank of a dinosaur’, bore tough armour that covered their skulls, backs, eyes and cheeks. Because the entirety of their skull was a solid mass of bone, and their bony plates had crisscrossed, collagen fibres that resembled the fibres you see in bulletproof vests, it would have been awfully tricky to take them out with a gun- requiring an individual to have an awesome aim with a powerful gun according to most palaeontologists; although some experts disagree. Essentially, they are in unison that the Ankylosaurus was tough, weathering the bites of big boy T-Rex’s, and would most certainly not be taken out with any small pistol gun you would take around with you in case of dinosaur emergency!

Horner told journalists that the Jurassic Park writers wanted to initially give the dinosaurs superpowers- which wasn’t feasible to realism, considering it would have had to borrow its attributes from existing animal DNA, and no-one has come across a bulletproof animal just yet! The mechanics of a bullet-proof dinosaur seems unrealistic too, according to Horner, who believes the armour needed to reject a bullet wound would be so heavy that the animal would have serious problems moving- which is not conducive to evolutionary success! The Ankylosaurus with its armour weighed tons, and as such, was a very slow dinosaur that wouldn’t have been able to keep up with us feeble humans. Its defence against the T.Rex was its spiny club at the tip of its tail.

What scientists have said is that the dinosaur injuries sustained in films are inconsistent to what would really happen, with some head shots failing to make injuries to some dinosaurs, whilst one shot appearing to make fatal wounds to others. Some scientists are even sad that Jurassic Park fails to depict the current scientific thinking of dinosaur existences. Essentially telling us that we can’t rely on Jurassic Park as research in the case of dinosaurs roaming the Earth again; we simply need to practice our aim with airsoft rifles to make sure we are prepared- just in that slim chance- a crazy scientist figures out how to make dinosaurs and sets them free…