The 25th official James Bond film has been announced, with a release date of November 2019, though it is still unsure whether Daniel Craig will return for a fifth time to play the titular Bond. To celebrate the happy news that we will see the super spy grace our screens once again, and to keep us going while we wait over two years for it, we have taken a look at our favourite guns used by Bond since the popular franchise began in 1963.

Bond is not Bond without his famous Walther PPK. It originally made its debut in 1962’s Dr. No and was made popular by Sean Connery. The sleek, compact design of the German PPK pistol was Bond’s primary weapon and featured in several of the books and films. The use of the PPK was recommended to Ian Fleming by firearms expert Geoffrey Boothroyd, who thought it better than the Beretta. It’s use of a 7.65 mm calibre, that is available across the world, fits in with Bond’s global lifestyle.

Though maybe not the most popular Bond gun, there is no denying the Anderson Wheeler is a beauty. The double rifle makes an appearance in Skyfall (2012) when he uses it during the big showdown at his ancestral home in Scotland. The hunting rifle belonged to Bond’s father and had a good kick to it, but in the hands of Bond, recoil is no problem. The British made side-by-side rifle is fitting for Bond, and he sadly tosses it away when he runs out of ammo for it.

The popular handgun has made sporadic appearances in the franchise through the years, starting with Dr. No. A suitable sidearm for Bond, there is not much that compares to the classic M1911A1, and it has definitely set the standard to which many modern semi-automatic handguns are held. The M1911 was also the standard-issue service pistol of the U.S. armed service from 1911 to 1986, used prominently in both World Wars.

Not necessarily a gun we would associate with Bond, it made an impression thanks to the villain who wielded it in Goldfinger (1964). The gold-plated Colt was the weapon of choice for the film’s villain, and though more strongly associated with gangsters, the Colt has to be one of the prettiest guns to appear in the franchise and is instantly recognisable. 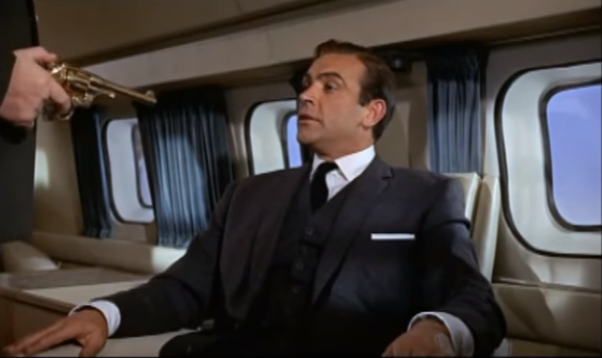 The SMG was to henchmen as the PPK was to Bond, and as such has become an intrinsic firearm of the franchise. In real life, the Sterling SMG was a British submachine gun designed in 1944 and served the British infantry through the Gulf War. The weapon of choice for the Bond bad guys, Bond was able to get his hands on one himself in 1969’s On Her Majesty’s Secret Service and undoubtedly wreaked havoc.

The Kalashnikov AK-47 is one of the most popular assault rifles in the world, and unsurprisingly this has been transferred to the silver screen. However, they are a rarity on movie sets, with variants and copycats having some cosmetic changes to appear like the AK. In Bond, the Kalashnikov appeared in Octopussy, (1983) used by Soviet soldiers. It appeared again in The Living Daylights (1987), where Bond managed to take the AKM of a Russian soldier and used it during the airfield battle.

Surplus Store has lots of air rifles and airsoft guns in stock, why not take a look at the range and channel your own 007 skills?