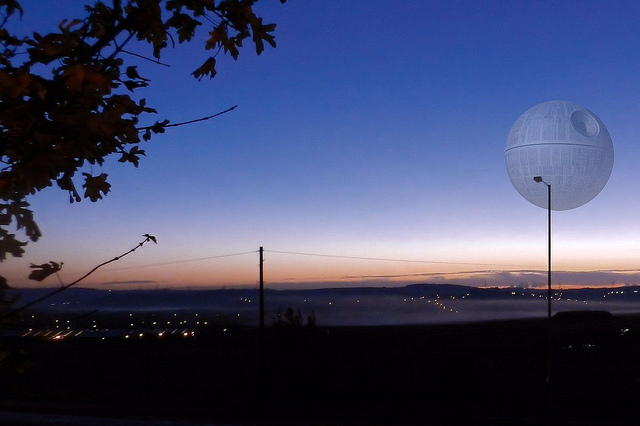 The Death Star is arguably one of the most recognisable structures from science fiction. The heavily armoured, heavily armed space station had the destructive power to turn entire planets to rubble (a moment’s silence for Alderaan…) while acting as a military base from which the Galactic Empire could launch their assaults.

While it is a mere fictional pipe dream, it hasn’t stopped some very serious military minds from developing their very own, very real armed space stations.

Military experiments during wartime have led to technological advances that we still use every day. The modern air rifle was refined following World War II, while constant development in airsoft guns are made regularly using technology that had previously been reserved for armies around the world. But what about space technology? While there might not be any current examples of Death Stars out there, it doesn’t mean that there haven’t been efforts to get one into orbit.

We looked at examples from three different countries below, showcasing how they attempted to outdo Palpatine’s efforts:

The first example of a death star from history was discovered following the climax of World War II. There are many stories and myths of Nazi occultism which reportedly took place, many of which describe “super weapons” that were in development; and it just so happens that one of this was a space-bound weapon.

When sifting through the intel gathered following the collapse of the Nazi Empire, U.S. Army technical experts discovered plans for missile technology, aircraft designs and the plans for an orbital weapon. Space Nazis would have been a very worrying concept (those of you who have seen Iron Sky will know what we're talking about!).

Initially, the plan was to build a giant refuelling station for spaceships that were setting out to explore the solar system. The plans were first devised by aerospace designer Herman Oberth in 1929. Oberth himself is a bit of an aerospace design legend, who went on to design the V-2 rocket for Germany and the Saturn V for the U.S.

However, following the breakout of World War II, changes were planned for the space station. The idea was to put it into lower orbit and fit it with a giant mirror, which was capable of burning enemy cities or boil parts of the ocean. It would be a manned station, who would receive instructions on where to aim their giant magnifying glass. 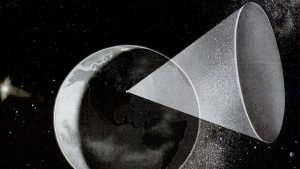 Alas, it never came to fruition, as there wasn’t a heavy rocket capable enough of transporting the parts into orbit. But even if it did, there’s no evidence that the sun gun would have been a success. As the giant mirror would reflect light from the sun, the initial point of contact (on the mirror) would be the hottest, with the reflected light being much weaker. If they wanted to burn cities down or boil the ocean, they’d have to keep the light on the same spot for an extended period of time, which is also very difficult to do in lower orbit as the ground below is moving at much higher speeds (because science!).

There was a variation of reflective space technology that was a success when the Soviet Union launched one in the 90s to bring light to Siberia. A 65-foot-diameter mirror was able to produce light equivalent to roughly three full moons, so scaling that up would result in a pretty mean city destroyer; although one that would be pretty tough to maintain!

In April 1973 in modern-day Kazakhstan, the Proton rocket was launched into space carrying the space station known as the Salyut 2, which was part of a Soviet civilian program to establish a firmer presence in space… or so we were led to believe!

In fact, the Proton’s payload contained the world’s first military space station, known as the Orbital Piloted Station-1. Following the OPS-1 station 10 days later would be a crew, who would set up the station ready for further inhabitants. However, shortly after the station was deployed, the Proton fuel tank exploded, causing the manned mission to eventually be cancelled. But this wasn’t the last time that the Russians attempted to launched weapons into space… 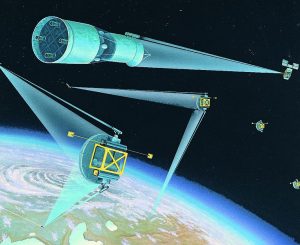 Both the U.S. and the Soviet Union were able to establish military outposts in space over the years, with the Russians being more successful than the Americans.

OSP-2 was developed with the idea of having a crew, and they would be able to defend themselves using a 23mm cannon mounted on it. The cannon was modified from the tail gun of a Tu-22 bomber and would be fitted with 32 explosive shells. The entire station would then rotate in order to face a threat.

The space cannon was even tested, and further plans were drafted for an OPS station which would carry missiles, but these never got off the ground. But unlike the Empire’s planet killer, OPS-2 was never designed to fire upon planets; the Soviets designed the cannon to aim at other space crafts, envisioning some sort of space battle that is not uncommon in the world of Star Wars.

But eventually, unmanned satellites proved to be more reliable and economical than astronauts, so manned space stations were abandoned.

The Strategic Defense Initiative was announced by President Ronald Reagan in the 1980s and was dubbed as the “Star Wars Initiative” by the media due to the number of space weapons that were reportedly in development.

The plan for a spacecraft that could disable incoming nuclear weapons with lasers was well-known by the general public, but this is a reactionary weapon, not a permanent one. 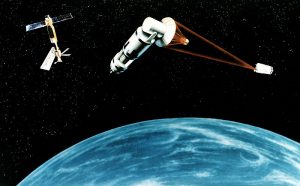 What is lesser known is the story of a series of permanent armed space stations. A NASA paper written in 1989 outlines some details of what the defence industry had in mind, including the use of an electromagnetic railgun. The railgun, which uses electric currents to create powerful magnetic forces that can fire projectiles at very high speeds, would be used to launch small satellites from a mothership into orbit.

There was also another idea in the paper called “Have Sting”, which spoke about the possibility of placing permanent railguns into space. Large companies such as Boeing and General Electric were also reported to have been involved in the project.

Have Sting would launch space crafts from the railgun that would use remote sensing technology to find their targets in space. Tracking methods such as millimetre wave radar and infrared heat signatures were included in various projectile designs.

Although it never got off the ground (pardon the pun!), Have Sting did potentially pave the way for further electromagnetic gun developments, which are still relevant today. The Navy continues to use electromagnetic technology and has even stated that they one day hope to launch warplanes from carriers using electromagnetic rails. Modern methods of ground-based defence systems also launch hunter space crafts on rockets, which are equipped with sensors to detect warheads while they are in space and destroy them in a collision… does that sound familiar?!

You could argue that these “death stars” never really worked out and should be written off as technological dead-ends. But when you look at the individual elements that have been utilised elsewhere, the amount of time and budget that was put into them and the potential that space is becoming more militarised, have the roads been paved for a new theatre of war?