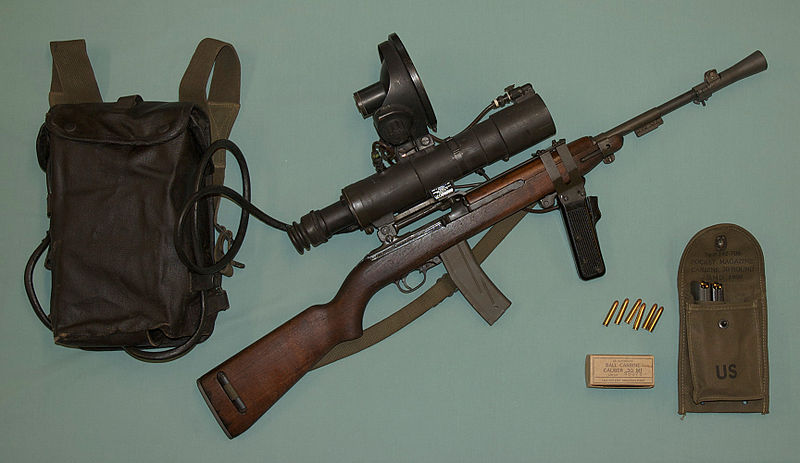 We love looking at unusual historical guns here at Surplus Store, and the one we recently stumbled across grabbed our fancy. The gun in question is from the US Army and is an example of the first night vision system used in active combat, known as the M3 Carbine.

The M3 carbine system (developed under the title T3) was first used in the Battle of Okinawa in 1945 and proved to be quite effective. The M3 was essentially an M2 fitted with mountings to allow infrared sights to be attached to the device, which took the place of the iron sights. Infrared sights were developed in an attempt to counter the tactics used by the Japanese, who used the low light and jungle environment to their advantage.

Unlike other weapons of a similar class, the M3 was produced in limited numbers as a “semi-prototype”. Only around 2,100 of these guns were produced, compared to over five million M1 carbines, half a million M2 carbines and 150,000 M1A1 carbines.

To put this in perspective, our Yukon Photon night vision scope takes two AA batteries to power. If modern airsoft guns had the same power requirements/battery tech as the M3 sight, you would have to carry a total of three backpack batteries; one for the scope and two for the AEGs! Although this was a great advancement for the time, we’re grateful that batteries have become more powerful and compact!

But in spite of all this and the fact that fewer than 500 units were developed, it accounted for about 30% of Japanese casualties caused by small-arms fire during the first week of Okinawa. Building on the success of this gun in WWII, the design was refined in time for the Korean War.

Due to the success of Okinawa, the M3 was taken and developed to be more effective, namely with the inclusion of a new scope. This scope had a longer effective range than its predecessor – around 125 yards – but still required the user to carry the heavy battery backpack. As they were primarily used in static defensive positions to locate the troops who attempted to infiltrate in the dark, it shouldn’t have been that much of an issue... but US soldiers weren’t happy.

There weren’t many combat personnel in the Korean War who knew that the United States Army was armed with night-vision capabilities, and those who did know about them didn’t particularly like them. Despite being effective in World War II, too many focussed on the flaws. The upgraded Korean War version did feature almost double the effective range, a T23 flash hider fitted and much less vulnerability around the IR light source. But this didn’t compensate for the main issues that soldiers had with the M3, namely the underpowered .30 calibre bullets, the fragile electronics and the heavy battery pack. Adding the kit to an M1 or M2 would turn it from a six-pound rifle into a 34-pound beast!

Despite its failures, the M3 managed to set the stage for modern infrared and thermal sights and demonstrated the potential of a night-fighting weapon. There were around 20,000 sets that were made before they became obsolete, which resulted in them being surplussed to the public, mainly aimed at hunters and bird watchers!