U.S. Army Working on “Extra Arm” for Heavy Gunners like the Movie "Aliens" 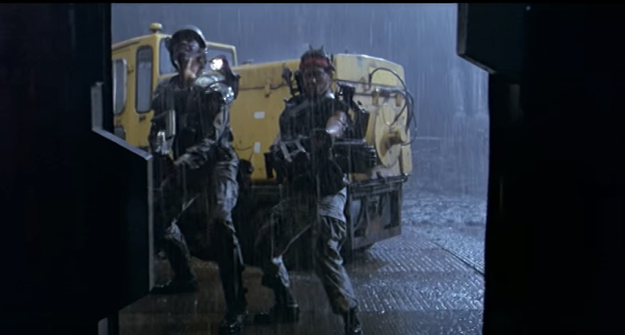 It seems to be a regular occurrence that the United States Army borrow from science fiction to create new equipment, and recent reports are no different! They are now looking into a way of allowing their soldiers to carry heavy weapons attached to a mount, much in the way the guns are carried in one of the Alien movies.

The Army Research Lab in Maryland is working on a waist-mounted arm that will be capable of carrying an M249 Squad Automatic Weapon (SAW). The arm is connected to a wearable harness, with a total weight of 3.5 pounds (1.6kg). This relatively light piece of kit is said to be able to carry items up to 27 pounds (12kg) – the weight of a loaded SAW – or a defensive shield to protect the soldier from gunfire, which weighs in at 20 pounds (9kg).

In the film Aliens, set in 2179, there is a platoon of heavily-armed Colonial Marines who are sent to investigate the colony of Hadley’s Hope, located on planetoid Acheron LV-426. Interestingly, the machine gunners carry their M56 Smart Guns on a harness which is near enough identical to the design being worked on at the Army Research Lab. The fictional gun in question is also pretty close to the M249 of today’s day and age. Take a look at a quick clip of the guns in question below, which were made by attaching motorcycle parts to the M56 MG-42 German machine gun and attaching it to a Steadicam rig!

Engineers first started working on improving the mobility and effectiveness of dismounted soldiers in 2015, with a prototype harness and arm completed in 2016. The arm is meant to offer a more stable firing platform for the heavier, high-recoil guns, while also helping to reduce muscle fatigue.

Engineers are also looking into making the arm useable by a wide range of body types, as well as offsetting the harness and arm system against the weight of the soldier who is using they. The current version also uses carbon fibre as a more lightweight option than other materials.

It is all well and good in principle, but does this new creation actually work? In 2017, six soldiers tested the arm and were fitted with electromyography sensors which were used to measure muscle activity, as well as collecting data on how soldiers were using their muscles with the “third arm” compared to without it. Speaking of the tests, mechanical engineer Dan Baechle stated: "We found that it reduced the fatigue and reduced the muscle activation for some soldiers."

Surprisingly, the scientists working on the real arm have improved the technology of the fictional one. In the film, the arm harness is attached to the gunner’s waist, which the U.S. Army replicated in their prototype, but soldiers had problems with the device, so they moved it to be mounted on the back of the wearer. What’s more, the real-life version does not require a power source to work, so it won’t add batteries and extra carrying weight to the soldier’s loadout.

The extra appendage is still undergoing testing to improve aiming accuracy and ergonomics, but it seems that an arm of some sort will eventually make it to the troops, and when it does, those armed with the heavy weapons will be able to carry on their fight for longer with less fatigue!

What do you think of the potential of having extra gun-toting limbs like in the films? Do you think it will improve the effectiveness of the soldiers? And would you like one to mount your airsoft guns to?! Let us know your thoughts on our social media channels.