The Weird and Wonderful World of Airsoft Clothing 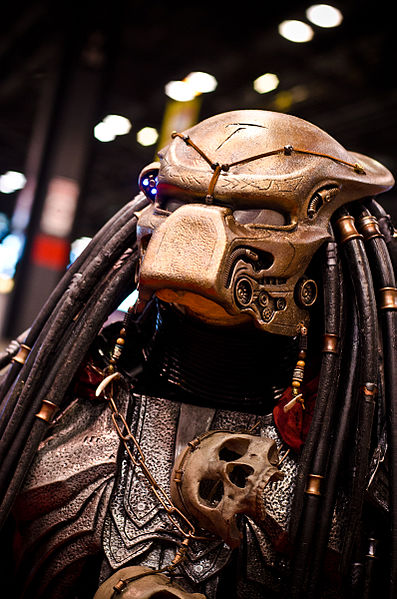 In the birthplace of airsoft, many games now see cosplay influences on the field. Japan host many cosplay-only sessions themed around popular media such as Star Wars and Pokémon. The Japanese, it seems, love their airsoft outfits so much that full-length mirrors hang by the entrances of the playing fields so that they can get in a last-minute check.

The influence of Japan has seen flamboyant and awesome outfits make their way into airsoft games around the world. To celebrate, we took to the internet to fish out some of the best airsoft outfit ideas we could find (not everyone wants to be pictured in that famous Borat thong!):

Predator masks have been on the airsoft battlefields for a while now, but that doesn’t make them any less of a classic. From popular 80’s monster movie series, when a player adorns a Predator mask it makes everyone just want to go all Arnie Schwarzenegger on them! If you’re going to wear one of these, you better make sure you bring your A-game to the field.

Talking of horror, roll on our first YouTube find from the great team at Node. This airsoft game finds the team in a creepy Friday 13th re-enactment, with Jason (mask and all) chasing them around the house. Now, this is a great option for a Halloween skirmish! Watch the full video below:

Looking through the RIFT Airsoft forum, we came across a frightening picture of a creepy clown airsoft player that is the stuff of nightmares. Other entries included one guy dressed as a banana and one as a sexy French maid (which is perhaps scarier than the clown… jury is torn on that one!).

Next entry from YouTube is this T-Rex in a hilarious airsoft game of cat and mouse (or mice, if we are going to be more precious). With the popularity of T-Rex costumes, we weren’t surprised to see this one make it to airsoft, but it still doesn’t make it any less funny- particularly with how difficult it looks to move around in the outfit. Take a look here:

Those guys at Node have done it yet again, with their bodyguard outfits. In a game of ‘protect the president’, the players are suited and booted for this intense skirmish- all in honour of the glock airsoft pistols.

From bodyguards to spies, the lads bring to life the multi-player video game ‘Spy Party’ that was released this year. One character is the spy, who attempts to blend in at the party (whilst completing tasks). Another is the sniper whose mission is to find out who the spy is. It’s a game of intelligence… but who will win?

Just as much a classic as the Predator masks, skeleton warriors are increasing in popularity among airsoft players. Adding an element of darkness, don’t be surprised if you see a few skeleton warriors running around the field with their airsoft guns if you’re new to the sport.

Video games are an inspiration to our game, so it’s no wonder that many airsoft players are drawing on them in their airsoft attire. Classics such as Call of Duty and Halo are seeing players across the globe make up the iconic outfits. Just take a look at these great examples:

Airsoft is all about enjoying yourself, making like-minded friends and never taking the game too seriously. And now, it seems, it’s also about perfecting your airsoft outfit to show off your personality!

Would you dare to wear any of these on the airsoft field? Or have you got any weird and wonderful outfits of your own you want to share? Let us know by posting pictures or comments on our social media channels. Double points for anyone who sports the French maid costume!