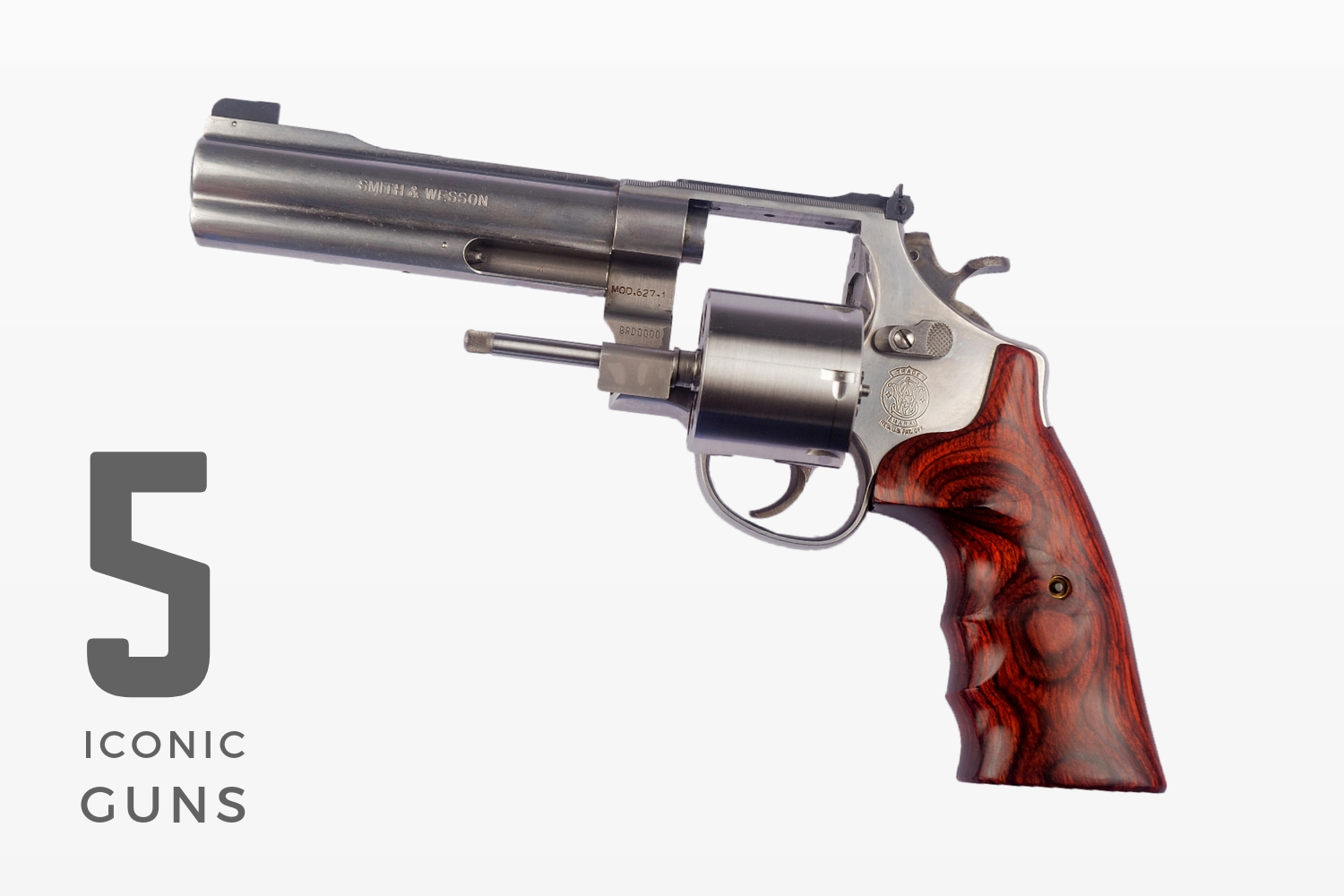 This piece of content contains spoilers from movies and TV shows – so read at your own risk - you have been warned!

Throughout the many years of TV and film, there has been a variety of guns that we couldn’t imagine our favourite characters without. Here we’re taking a look some of the most iconic guns, mostly from film but with the addition of one entry from a TV series.

A challenger for one of the most iconic guns featured in film, Detective Harry Callahan’s Smith & Wesson Model 29 from the famous Dirty Harry film series. This powerful .44 magnum revolver is featured in all of the movies from the franchise, as well as every accompanying poster, along with the more legendary Clint Eastwood, of course. One of the most famous scenes featuring the gun is the classic line “Do I feel lucky?" Well, do ya, punk?” as Dirty Harry points the revolver at the wounded criminal beneath him. The movies have undoubtedly made this magnum revolver one of the most legendary of all time.

There are numerous iconic weapons from the comic turned TV series, The Walking Dead, including Darren’s crossbow, and Michone’s Katana but none are as well-known as Rick’s Colt Python. There aren’t too many moments where he is without his iconic revolver, whether it’s drawn firing against walkers or the real threat, people, or holstered on his hip. Top tip, when you see him holding it in close up take a long look at how on earth he’s able to hit a barn door with the sights at 45 degrees from his eye line! Movie Magic! It’s hard to imagine Rick Grimes without the Colt Python. There have been many classic scenes featuring this gun, such as when Rick screams as he shoots the firearm with immense fury at the Governor after he killed his friend, Herschel.

The James Bond film franchise has many renowned weapons as well as nifty gadgets. A more than worthy mention, of course, is the Golden Gun from 1974 movie The Man with the Golden Gun, but none are more well-known than Bond’s firearm of choice, the Walther PPK, originally debuting in the 1962 film Dr. No, used by Bond of the time, Sean Connery. The iconic German-made pistol has since featured in almost all the franchise movies since (apart from a late 90’s early 2000 dalliance with a P99, but who didn’t go a little crazy around Y2K?). Of course, Bond has used many weapons throughout the years, and we obviously have a list for James Bond’s best guns. 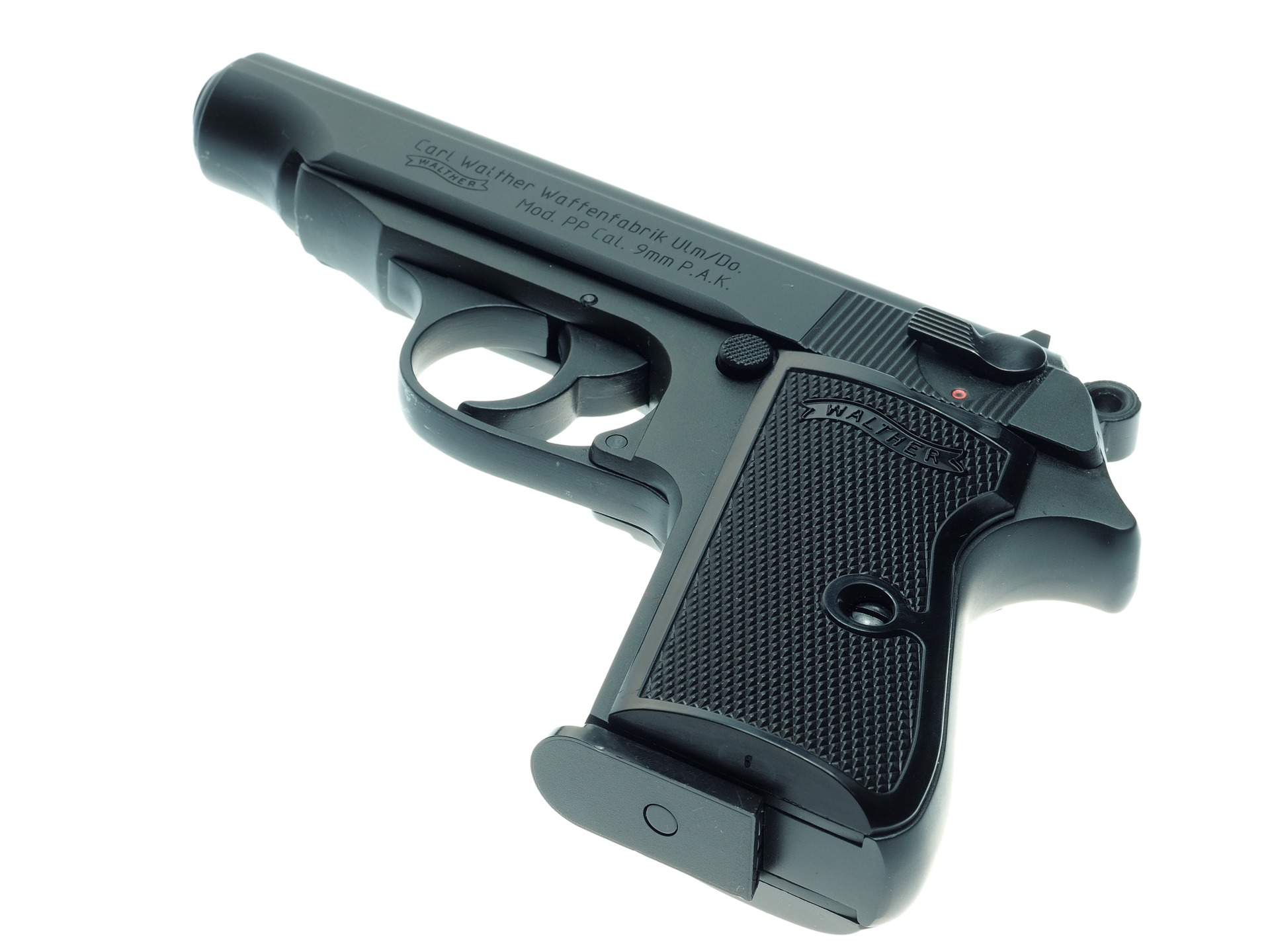 Featured in the notorious film: Aliens, the M41A Pulse Rifle equipped with a flamethrower was a creation assembled by the movie’s main character, Ellen Ripley. As you may know, duct tape can be used to make virtually anything, wallets, boats and of course, it can be used to tape together a rifle and a flamethrower. We see this fantastic creation utilised as Ellen Ripley fends of Xenomorph in her attempts to rescue Newt. Fun Fact, the makers of the M41A Pulse rifle used a Tommy gun and the heat shield from a SPAS12 shotgun to create the iconic weapon. There are also many Airsoft replicas of the Pulse Rifle… And they’re all the wrong colour!

Do film quotes get any more well-known than this one? Perhaps, but this line is undoubtedly up there as one of the best. The famous scene from the 1983 classic Scarface has been quoted by virtually everyone at least once in their lifetime (even if they don’t know why). The scene features Tony Montana accompanied by his ‘Little Friend’ – the not so little Colt AR-15, as he delivers the iconic line “Say hello to my little friend!” while blasting the doors off his office with the attached M203 grenade launcher, attempting to fight back against Sosa’s gangsters. This is followed by an absolute onslaught by Tony Montana with the assault rifle; we won’t spoil the rest! But if you haven’t seen this movie or any of the Scarface movies, then what have you been doing?

Can you think of any iconic firearms that we missed? Most of the guns featured on this list have replicas in the form of airsoft guns, which would take out on the field with you? Let us know through our socials! If you found this piece interesting, you might want to take a look at fun facts about guns in pop culture.