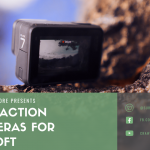 Many people are capturing their days on the field thanks to the surge in popularity of uploading airsoft gameplay footage via sites like YouTube and Facebook. We're seeing a large increase in people video their airsoft experiences, whether they're using a scope cam, a first-person camera, or both.

Although there are arguments for and against using cameras in airsoft, we can't deny that we've all marvelled at some of the incredible sniper shots captured on film.

If you want to start filming your airsoft games or enhance your current equipment, keep reading to find out what we recommend for shooting the best quality footage!

Wherever action cameras are ranked, GoPro is frequently mentioned first. Being the industry standard for years. The Hero 10 Black is possibly the best of the bunch.

The new technologies have grown in leaps and bounds from where the company began, and now generate some of the most spectacular action movies and photography on the globe. We're also starting to see GoPro cameras in movies, which is really amazing considering they only cost around £400.

Hypersmooth 4.0 is new to the GoPro Hero 10 Black. The efficiency of horizon levelling is increased from 27 to 45 degrees. The specs are bigger and better than we've ever seen on a GoPro before, ensuring that you can capture the greatest footage imaginable!

Getting The Camera Ready for Airsoft

If you're thinking about getting one of these, there are a few things you should keep in mind. Although the camera comes with a good range of mounts and attachments, it will also require some modifications and other equipment to make it airsoft ready.

For starters, the camera's default battery isn't big enough to withstand a full day of skirmishing. You can purchase rechargeable battery packs seperately, but we would definitely recommend at least bringing a power bank with you.

Most SDHC cards will fall into this category, therefore you'll want to look for SDXC memory cards with a capacity of 64GB or above to avoid video corruption. If you record in 1080p at 60 frames per second, you should be able to get about four hours of footage.

Although GoPro cameras are designed to resist some wear and tear, certain elements of the camera are more vulnerable than others. The lens, for example, and the front-facing LCD screen. Make sure you bring an additional sacrificial lens to the field with you. This is a backup lens that can be swapped out quickly in the midst of combat if your primary lens is damaged. Additionally, cover the LCD with strong, transparent plastic to protect it from BBs.

Although GoPro has had the action camera industry pretty much cornered for years, it hasn't stopped other, more established firms from attempting to enter the market. The Sony FDR X3000, which was released in 2016, is still one of the best on the market.

The camera has good picture stabilisation and can shoot in 1080p and 4K, albeit there is no 2K option. For the most part, shooting in 1080p at 60 frames per second will suffice for airsoft. It will also make data management in the editing stage much easier.

A Slight Downside for the Sony

The lack of suitable accessories is one of Sony's biggest drawbacks. Whereas the GoPro has a plethora of accessories from both GoPro and other businesses, Sony accessories are a little more difficult, but not impossible, to purchase.

We recommend getting a lens protector and something to cover the LCD on the side.

The only benefit for Sony is that the Sony FDR X3000 is still, in 2021, one of the only cameras to have a 3.5mm audio-in jack. This will give you a somewhat better audio while filming, especially If you're going to wear the camera on your hat/helmet, this camera will provide you with clearer, more balanced sounds.

To complete the set, you'll probably want a second camera to catch all of the action from your rifle. Your gun's camera will have somewhat different specifications than the other. You want it to be as unobtrusive as possible, thus it should be small, light, and dark in colour. The RunCam ScopeCam checks all of these boxes and then some, making it one of the most popular scope cameras on the market today.

The key difference between this and other action cameras is that it was designed primarily for use as a gun attachment, such as for airsoft or paintball. The camera can be attached to either the primary handgun's rail or the underside of your secondary pistol.

Another advantage of this design is that the lens can be adjusted to accommodate the camera's orientation, whether it's side-on or above/below your rifle. This requires the use of a screwdriver and can be tedious, though; it's not something you'll be doing on the field.

How Well Does It Perform on the Field?

The camera can shoot 1080p video at 60 frames per second or 720p video at 120 frames per second. Continuous recording time reaches 240 minutes. Although the resolution is slightly lower, this is reflected in the pricing. Furthermore, because most of your footage will likely be shot on your main camera, with the exception of a brief piece of scope footage, quality isn't a huge concern.

With the camera’s IP64 waterproof design, it is able to work on rainy days and is immune to bad weather.

The camera's default battery is 850mAh, which lasts just over an hour on a full charge, so you'll either have to be careful when using it or utilise a supplementary power supply to keep it running for longer. However, be aware that incorporating too many wires into your arrangement will impede manoeuvrability.

The cannon comes with two lens options: 35mm and 25mm. The 35mm lens is optimised for a somewhat longer distance and focuses between 30 and 60 metres. The 25mm is a little shorter and focuses between 20 and 50 metres. If you're shooting people under 30 metres away, your main camera will probably obtain good enough footage, therefore we recommend the 35mm lens.

The Mobius is an alternate scope cam that can be used in place of the RunCam. Alternative lenses, as well as a variety of mounts and other accessories, will be required to make the camera the best it can be.

The Mobius may not be your first pick if you're looking for something to use right out of the box, especially as the stock lens isn't ideal for airsoft, particularly when capturing long-range shots. If you like to customise your guns and accessories, the Mobius is an excellent choice with a lot of customisation options.

The Mobius is capable of recording in 1080p H.264 format. High-definition video at 30 frames per second. In wide-angle filming, the bit rate will be about 18,000 kbps at the highest video quality. A 720P 60 frames per second option is also available for recording quick action.

Time Lapse mode is also available, where the camera will automatically take time-lapsed still images. The Mobius can also be configured for motion detection recording, allowing the user to set the sensitivity.

The Mobius can record for approximately one hour 15 minutes. You can also add a power bank to increase the recording time to around six hours. The Mobius Actioncam is capable of recording live video while connected to an external power source as well, such as a driving recorder.

This brings us to the end of our look at the best action cameras for airsoft. We're always on the lookout for the newest and best airsoft YouTubers, and we hope to see you there soon!

Before you begin recording, be sure you have everything you need. We've got you covered, whether you need to improve your airsoft rifle or get some new clothing! Check out our entire online catalogue here!