Which Action Hero Would You Have in your Airsoft Team? 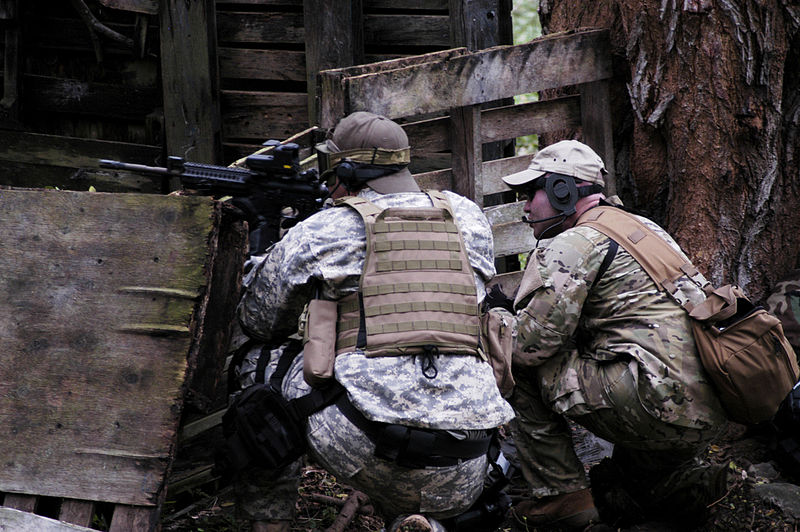 There is a plethora of action heroes that have been brought to us from films, books and video games who complete awe-inspiring feats and somehow come out of it unscathed. This got us thinking; if we could have any action hero standing next to us at our next skirmish, loaded to the gills with airsoft guns, who would we choose?

With this in mind, we looked at a number of characters from over the years and contemplated their pros and cons to decide whether they would make a good teammate; which hero would you choose?

Note – the action heroes we have picked here are all “normal” people – i.e. no superpowers!

We start with everyone’s favourite Vietnam veteran, John James Rambo. The one-man wrecking machine is probably best known as the film character played by Sly Stallone, but the Rambo films are adapted from the 1972 novel First Blood by David Morrell.

Of course, as a Vietnam veteran, Rambo would have extensive knowledge of military and guerrilla tactics which he could pass on to his teammates to ensure they are structured in the best possible manner.

He also has a large number of awards and decorations from his time in the forces, including multiple weapons qualification badges, meaning he will be adept with any airsoft gun you put in his hands.

Plus, the guy can do this. Why wouldn’t you want this on your team?!

One of Rambo’s nicknames is “Lone Wolf” due to his one-man-army style of combat. While this has proved to be effective in his various outings in Vietnam, Thailand and Burma, he doesn’t seem to be much of a team player… The last thing you need is one guy running off and taking everyone out while you drudge behind, hoping to pick up the scraps!

We’re also not so sure how much fun he’d be between games, and let’s be honest; it’s all about having a good time at the end of the day, and we don’t think he would be much of a laugh to have around (we’re sorry Mr Rambo sir!).

The world’s most famous spy is another character who started his life on paper before evolving into Hollywood. The character was created by Ian Fleming and was named after an expert on Caribbean birds, with Fleming himself being a keen bird spotter; kind of takes away the impact of the name now, doesn’t it?

As 007 is potentially the world’s best spy, he has extensive knowledge of covert operations. The book version of James Bond was also a Royal Navy Reserve Commander which would showcase he is a capable leader and would be able to keep his unit in shape. The man has also been to space, driven an underwater submarine/car, piloted planes, leapt from buildings and stood up against some pretty hefty beatings, showing not only is he in peak physical condition, but he can also adapt to situations quickly and think on his feet, which is always important in airsoft.

One of Bond’s greatest assets is his Quartermaster, who has provided him with some pretty handy gadgets to get him out of tight spots over the years. While these are all well and good in the field, we’re not sure jetpacks and grappling hooks would be allowed at many venues across the UK… Also, if he’s going to be dropping cheesy one-liners all day like in the video below, he’d almost definitely end up coming under some friendly fire:

Lara Croft is the titular character from the Tomb Raider video game series and known for being a highly intelligent and athletic archaeologist. When initial designs on the character started in 1993, she started as a male character similar to Indiana Jones before undergoing five redesigns and settling with the character we know today.

Lara Croft is a skilled firearms handler who is perhaps best known for using dual wield pistols, although she can adapt to use other weapons. Her athleticism and high levels of stamina will be suited to many scenarios, while her expert navigational skills will be beneficial in CQB scenarios that may include many twists and turns. She can also leap like a salmon – which is always handy - as seen here:

Croft has been known to flout the rules when it comes to protective clothing, meaning she would likely be disqualified from many arenas around the country. She also tends to be a bit of a lone wolf, meaning she could well leave you high and dry when you need her most!

On the surface of it, John Wick is a man who goes on a rampage because someone killed his dog. But he was actually the deadliest assassin for the Tarasov Mob until he requested retirement to look after his dying wife. He was granted it under one condition; he had to complete an impossible assignment, which he was able to do, disposing of all of Viggo Tarasov’s enemies in one night.

Wick served in the United States Marine Corps so is no stranger to military tactics. He is extremely efficient with both small arms and those which pack a bit more of a punch and is a master tactician, which he would no doubt be able to relay to his teammates. Wick is also in peak physical condition, meaning he could rattle through the skirmish and his opponents while barely breaking a sweat. Observe:

As with others on this list, Wick is a bit of a solo flyer, tending to go about his business on his own. He can also let his anger get the better of him, so if someone doesn’t call themselves as out when he hits them, he might throw his toys out of the pram… The last thing you need when your backs are against the wall is one man walking off in a sulk because “he definitely saw them take the hit”. You’re better than that Johnny…!

Katniss is the protagonist of the Hunger Games books and films. In the fictional nation of Panem – based in the ruins of North America - two teenagers (one male and one female) are picked each year from one of the 12 districts to take part in the Hunger Games; a televised event where they fight until only one “tribute” remains. Katniss volunteers to take her sister’s place in the Games, ends up winning and then sparks a rebellion against the brutal, controlling Capitol.

Katniss is a strong leader and extremely determined in her actions. She has been known to lead a team of people - albeit reluctantly – but proved to have decent leadership qualities where it mattered, which would be extremely beneficial in an airsoft scenario. As a keen hunter, she is also good at moving relatively undetected, while being able to follow others from their tracks and is known to be very resourceful.

Her main weapon of choice is a bow and arrow, which she learned from hunting with her father; but as we know, the bow and arrow isn’t an accepted weapon in the airsoft arena. How would she get on with an AEG assault rifle? Your guess is as good as ours!

She has a reluctance to take orders, which means she may not be the best team player unless she is in charge. This scene shows how good she is but how she also has a level of underlying sass…

These are just a few examples of action heroes who could make good airsoft teammates, but which would you choose? Perhaps there is someone you would prefer who is not on our list? Let us know your thoughts on our social media channels!