Does Airsoft Hurt? How to Reduce BB Pain and Impact 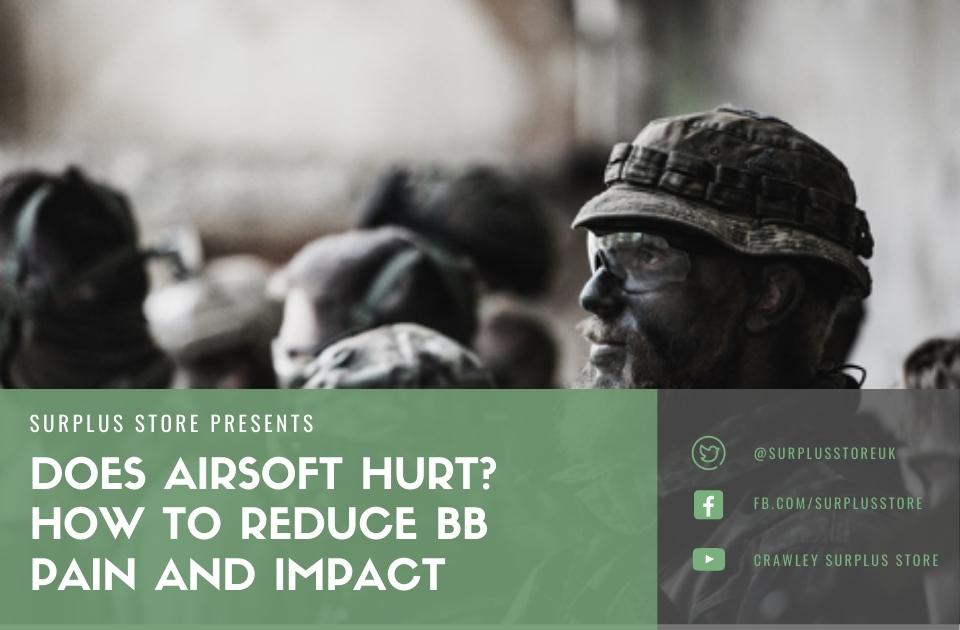 Obviously, airsoft guns aren’t going to do the same damage as a real gun, but that doesn’t necessarily mean it can’t hurt when you get shot with one!

Beginners to the game often wonder whether getting hit with airsoft BBs will be painful and to what extent it will hurt.

Fear of getting hurt should not put off newcomers as any pain is often largely avoidable and can be reduced easily.

Here, we delve into how much it can hurt to be shot with BBs and what you can do to reduce their impact.

If you’re running low on ammunition, why not browse our selection of 6mm BBs to prepare for your next game!

Many people who are interested in starting airsoft have been paintballing previously and use this as a frame of reference. Both game’s guns fire at similar speeds but airsoft ammunition is far lighter at 0.2 grams.

It is said that airsoft guns fire with about 1/15th of the energy of a paintball gun. This means that airsoft guns transfer far less energy; BBs will be easy to slow down, meaning a reduction in pain, with appropriate clothing or shielding.

When asked to describe what being hit with airsoft fire feels like, many players will say it feels like being flicked or pinched very hard. That doesn’t sound so bad, does it!

Of course, where you are hit and from what distance will play a part in how much it will hurt.

Getting hit from close range will be more painful, and your face can become an especially painful target from any distance!

If you aren’t covered in the right gear, you can come away from a game covered in small welts that can last a few days.

Be sure to pay extra attention and give protection to the following parts of the body to make sure your game is safe and pain-free:

If you are playing in a woodland environment, you are more likely to be firing, and be fired at, from greater distances which will reduce the energy of the shot and the eventual impact. There is also plenty of chance for cover; you’re not out in the open just waiting to be hit!

Don’t let all this talk of pain put you off because there are some simple ways to prevent any pain and reduce BB impact.

Proper clothing and protective gear is the main way you’ll be able to come away from a game without experiencing pain. Even simple coverings can do a world of good.

You should be covered from head to toe with some form of protective clothing. This can include combat fatigues, vests or body armour.

Eye protection in the form of goggles or visors will also be essential and will be required to play.

Through armour or clothing, the impact of a BB is often negligible.

When playing any kind of potentially dangerous game, it is vital that you keep to the established rules to ensure your own safety as well as everyone else’s.

Serious damage is rare and often only comes from not obeying the safety measures put in place.

Respect your fellow players, and don’t deliberately take extremely close-range shots or shots you know will be too painful.

For many, the fear of pain and getting hit is an integral part of the game. With the threat of being hurt, there is more reason to strategise and really think about your tactics before mindlessly rushing in.

When you’re on the high of an adrenaline rush, you also feel less pain; channel that and enjoy it!

Here at Surplus Store, we are dedicated to ensuring you have the best game possible with quality gear and ammunition.

What are your best pain prevention tips when it comes to airsoft? Comment below to help out newcomers to the game!