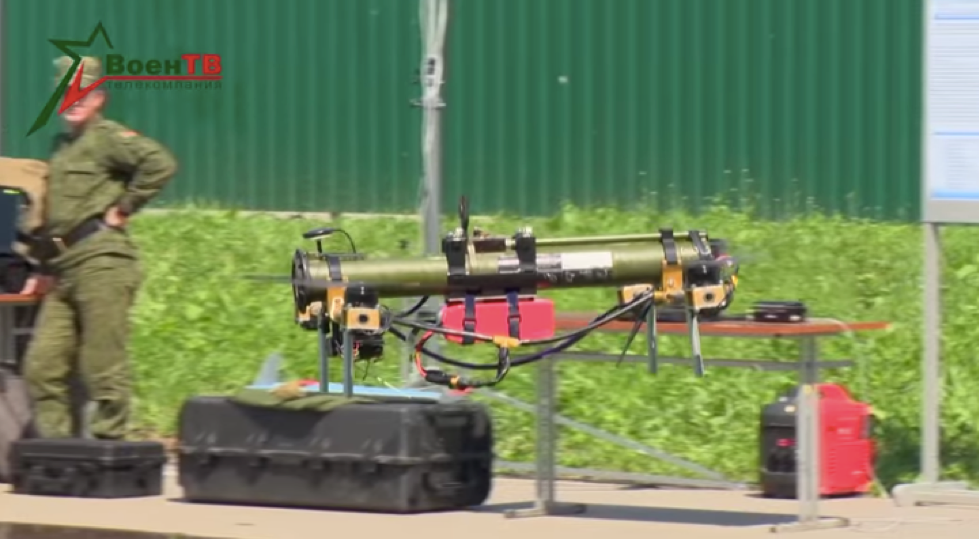 It seems that militaries around the world will stop at nothing to get a one-up on their rival and opponents, and Belarus seem to have done just that with the help of a drone and some hefty firepower.

We’ve previously seen videos of people attaching weapons to drones. One man decided to attach a handgun to his drone and stick the footage on YouTube, which ended up getting him into a bit of hot water… we’ve also seen airsoft pistols lashed to quadcopters and modified so they fire much faster, and with a certain degree of success it must be said!

But now the armed forces of Belarus have taken it to the next level with their modified quadcopter drone, launching one that carries a tank-killing RPG-26 rocket launcher! The single-shot launcher is controlled and remotely fired by the operator of the drone, but other than that, there are very few details surrounding it.

The drone can be seen for a few seconds in a 26-minute long YouTube video and looks to be pretty nimble, firing the rocket and not appearing to be too badly affected by the recoil. Although the video doesn’t seem offer too many details about the drone, it is known that it was taken at the Losvido Training Ground in Belarus.

However, anyone fluent in Belarusian who can translate the video and shed some more light on the situation will receive our eternal thanks!

What We Do Know

So, while we’ve outlined what we don’t know, maybe we should look at what we do know! The drone is a quadcopter of sorts, and it must be capable of lifting at least 7 lbs (3 kg), which is the weight of a loaded RPG-26.

The launcher itself is a disposable single-shot launcher originally designed during the Cold War for Soviet troops. It’s fairly basic in its design, essentially being a simple tube with a firing switch. The ammo is a 72.5 millimetre, high-explosive anti-tank rocket with a shaped charge warhead. It has an effective range of around 250 yards and can penetrate armour plating of between 400 to 500 millimetres thick, one and half metres of brickwork or a metre of reinforced concrete.

While it is a pretty deadly launcher, the RPG-26 cannot penetrate enough armour to take out an M1 Abrams battle tank, for example. If it were to attack from the front or the side, it probably wouldn’t penetrate the armour of the tank at all. However, a drone carrying the launcher which is easily manoeuvrable and could attack from the top or the rear - where the armour is at its thinnest – could certainly do some damage. It could also be dangerous to lighter, Multi-Purpose Vehicles (MPVs).

While getting the drone off the ground with the launcher attached and capable of firing is impressive in itself, aiming it accurately is an entirely different thing! From the brief look we do get of the drone, it doesn’t appear as though it has an aiming system… the video doesn’t even show the flight path of the rocket after firing which makes us really think about how accurate it could be! Ideally, the drone would have a camera parallel to the path of the rocket with a crosshair projection appearing on the screen of whoever is operating the drone.

It is also unknown how far away the drone operator can be from the flying launcher. There are long-range drones that can be over four miles away from the operator, but these are usually quite small and won’t be able to take the weight of the RPG. If the operating range of the drone is quite low, will it put the operator in danger being too close to the action?

Finally, in terms of damage, the RPG-26 is quite low compared to other launchers, but this is to be expected for how little it weighs. However, if the quadcopter was able to take an RPG-29, for example, it could nearly triple its tank-killing capabilities. The whole RPG-29 weighs 27 lbs (12 kg) but has been known to disable Abrams tanks in the past. If the quadcopter was modified and able to take this system, it could become a whole lot deadlier…

What do you think of the quadcopter launcher? Does it offer a glimpse of future, unmanned warfare or is it just a bit of a joke?! Let us know in the comments below or on our social channels.