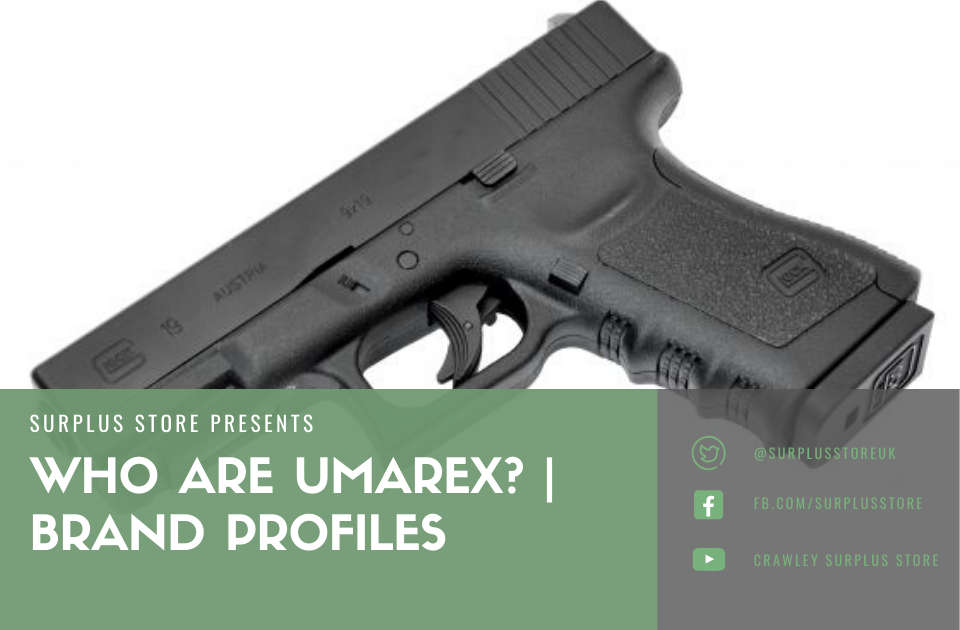 The History of Umarex

Umarex, initially known as Mayer & Riem, was founded in Germany in 1972. Their rise, initially as an air gun supplier, was rapid, taking advantage of changing times in their country and further afield.

In the same year as Umarex’s foundation, Germany changed its laws on gun control, restricting the availability of lethal weapons and loosening the availability of recreational alternatives. Suddenly, Umarex found itself in the perfect position, supplying the vast increase in domestic demand with their ‘over the counter air weapons’.

When Umarex launched, they sold only one weapon: a Perfecta Model G1 blank-firing pistol. One of Umarex’s leading figures, Wulf-Heinz Pflaumer, drove the company’s growth over its early years. Introducing structures from his previous career in the mailorder industry, he quickly turned Umarex into the largest exporter of airguns from China.

Quickly becoming an industry leader, Umarex began to sign exclusivity deals with some of the biggest firearms brands to produce air-based versions of their guns. One of Umarex’s first deals was with Daisy rifles, while they also struck a licensing agreement with the owners of British character Sherlock Holmes to produce a range of revolvers!

Why is Umarex Popular?

Of course, no company can get far without delivering a solid product. In the airsoft community, Umarex is seen as a solid all-rounder, with the majority of their guns appealing to beginners. Robust, reliable and upgradable, Umarex is a strong choice, hence its popular rise during its early years!

However, there is one reason more than any other why Umarex is popular – its licensing. Umarex is the leading name when it comes to producing air replicas of famous steel rifles and pistols. Their models are not only effective but also incredibly similar to their real steel counterparts!

As a result of their licencing and broader appeal outside airsoft, Umarex’s weapons are as popular as collector’s items as they are anything else.

The Most Popular Umarex Products

Umarex does produce some of its own unique weapons which have become popular as recreational and airsoft guns. However, their licensed models remain the most sought-after.

Note: Many of Umarex’s guns are built for recreational use and do not fit the regulations surrounding airsoft. If you wish to use an Umarex product for airsoft, do your research to make sure it’s legal or contact our team if you’re unsure.

One of the most famous firearms in the world, this replica of the Mod. 84 FS is the perfect example of Umarex’s incredible ability to turn models into CO2 replicas. Just like its more powerful counterpart, this air pistol is all metal, sits neatly in hand and packs a strong punch!

Another hugely famous pistol, the Glock 17’s iconic design is replicated in incredible detail by Umarex. The CO2 version keeps all of the markings of the original and comes with changeable backstraps for customisation.

This air pistol is designed for 4.5mm steel BBs with a metal and polymer frame and authentic drop out magazine. Because of this, you can’t use this pistol in airsoft fields, but it makes for a great collector’s item and hours of fun on the target range!

Umarex also supply the official replica of one of the most famous submachine guns in the world! Faithful to the original, this air rifle delivers 3.5 joules of power, a working cocking handle and a small amount of recoil. Again, like the Glock above, this is too powerful for airsoft, but is an awesome collector’s item for gun enthusiasts!

The Umarex Mp5k uses a combination of metal and plastic in its build. As with many of their guns, this model provides customisation in its 20mm mount rail, allowing you to attach any sight.

With its iconic design, this accurate airsoft replica of the Heckler & Koch rifle pleases both collectors and players alike. This airsoft rifle delivers performance to match, firing its 100-round magazine at 330fps, with the option of semi or fully automatic dependent on your preferences.

Despite all the exciting modern replicas that Umarex have made, one of their most popular styles is, and always has been, the old-school air rifle. Inspired by western legends, this rifle is as stunning to look at as it is to use.

Umarex has been responsible for producing some of the most popular air guns in existence, and we all appreciate their incredible work!

If you want to learn more about the brands that make up the airsoft community, why not check out our recent Tokyo Marui brand profile?