Giant Robots Set to Battle to the Death Because Why Not?! 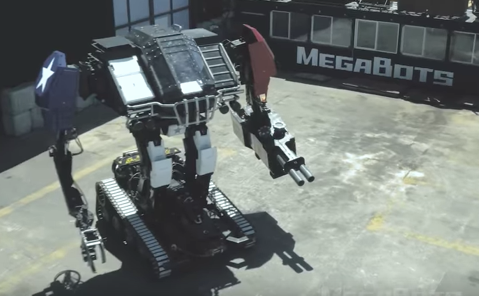 It sounds like a cross between Transformers and Real Steel, but the USA is about to take on Japan in an interesting battle; a giant robot battle, to be precise.

The people behind MegaBot and KURATAS robots have confirmed that their giant wrecking machines will come head-to-head in a fight which has been two years in the offing.

After feeling pretty chuffed with their creation, the guys at MegaBots went straight out and threw down a gauntlet to Suidobashi Heavy Industries, the creators of the only other known giant piloted robot in the world.

KURATAS is slightly smaller and lighter than his American counterpart (who’d have guessed it?!), standing at around 13-feet (4m) tall and weighing around 9,000lb (4,000 kg).

Unlike the American bot, Japan’s entry is kitted out with twin Gatling airsoft guns, capable of firing 6,000 BBs per minute! It is also kitted out with a water-cannon type device; perhaps a tactical move?!

Kogoro Kurata, the designer of the KURATAS robot, was keen to get the fight underway, but agreed with one condition in mind: "Just building something huge and sticking guns on it. It's super American... If we're going to win this, I want to punch them to scrap and knock them down to do it.”

So, a giant robot fist fight with added projectiles?! We like the sound of this! Both robots are going to piloted by a member of their respective team and live-streamed on Twitch starting at 7 pm Pacific time on Tuesday, October 17, or 3 am on Wednesday, October 18 for those of us in the UK.

Check out the video below for a taste of things to come; who are you back for the win? Let us know on our social media channels!