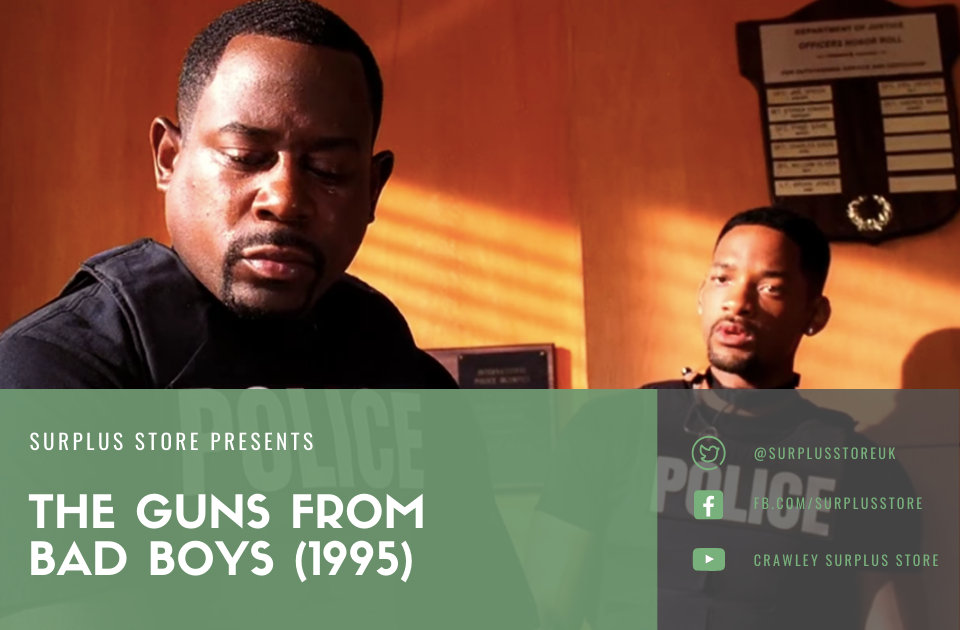 In 1995, the action-comedy Bad Boys was released, and it soon became a well-loved film. The main stars in the movie are Will Smith (Mike Lowrey) and Martin Lawrence (Marcus Burnett) who feature as Miami Police Department narcotics detectives. The plot of the film follows the pair as they set out to protect a witness of murder. Meanwhile, they also investigate a case regarding a dangerous drug lord who stole $100 million worth of heroin from the evidence storage room of their police department.Following on from the original movie, due to its success there was a sequel in 2003 called Bad Boys II and then this year, in 2020, Bad Boys for Life has been released.

We have decided to take a look at which guns were used by Will Smith and Martin Lawrence, along with other actors in the 1995 blockbuster. Please be aware that if you haven’t seen this film yet, there are some spoilers below; you have been warned! 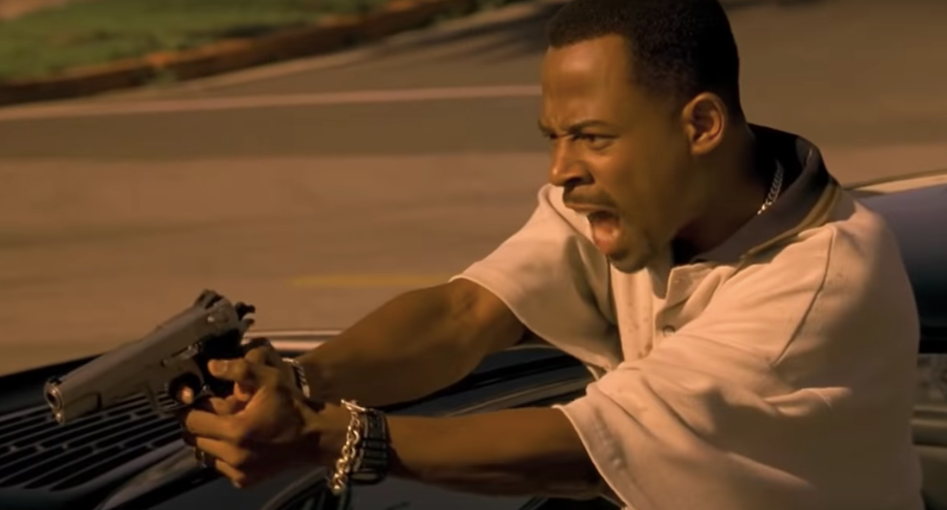 Marcus Burnett (Martin Lawrence) uses a Smith & Wesson 4506 throughout the film as his sidearm. The gun he uses features an original bulged frame and a square trigger with Novak or regular fixed sights. It is a third-generation semi-auto action/double action pistol that features an eight-round magazine. It will usually weight around 1.1kg and it was produced in was produced 1988-1999.

The carjacker, who is played by Michael Taliferro, points a Heckler & Koch USP at Marcus Burnett (Martin Lawrence) during the opening scene of the film. The firearm was first introduced back in 1993 and can be found in several different calibres including 9mm, .40 S&W, and .45 ACP.

Detective Sanchez, who is played by Nestor Serrano, uses a Beretta 92FS during the scene where he and Ruiz apprehend two gang members. The semi-auto pistol has a barrel length of 12.7cm, weighs 0.95kg and has a 9x19mm calibre.

Fouchet, who is played by Tchéky Karyo, uses a Beretta 85BB that features chrome plating and pearl grips. The pistol features a .380 ACP calibre and is just 0.62kg in weight. Fouchet’s most notable scene using this weapon is when he kills Max (Karen Alexander) and shoots Eddie Dominguez (Emmanuel Xuereb) in the leg. 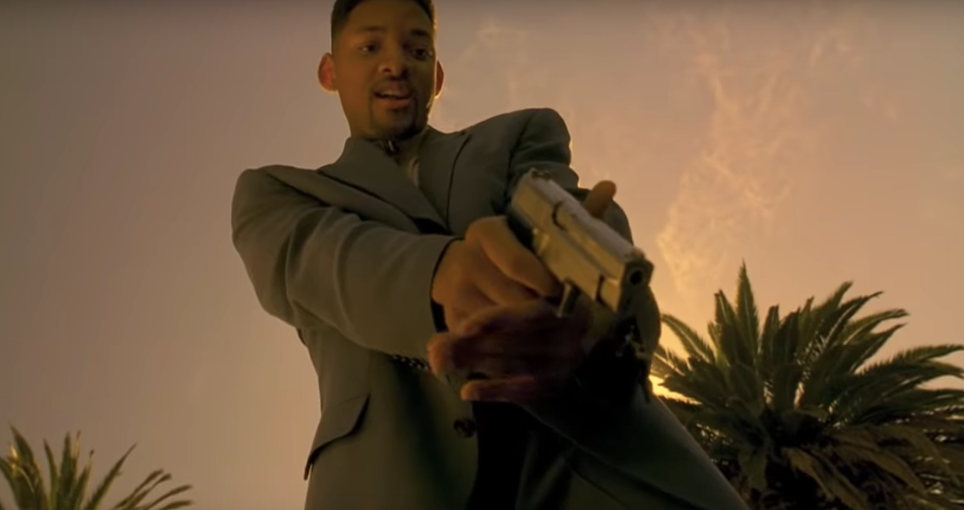 The chosen sidearm for Mike Lowrey (Will Smith) is a stainless SIG-Sauer P226. Generally, this semi-auto pistol weighs an average of 0.96kg and has a barrel length of 11.2cm.

When he isn’t using his stainless SIG-Sauer P226, Mike Lowrey (Will Smith) uses a SIG-Sauer P230 as his back-up gun (BUG). The semi-auto pistol is smaller than his chosen sidearm as it is slightly lighter weighing just 0.5kg and the barrel length is 9.1cm.

Towards the end of the film, Fouchet is wounded and in a last attempt, tries to kill his captors using a COP 357 Derringer. He fails because Mike Lowrey (Will Smith) spots the light reflecting off of the guns chrome plating and, therefore, shoots Fouchet before he can use his weapon against him.

When Fouchet approaches Mike Lowrey's (Will Smith) apartment, in an attempt to capture Julie Mott (Téa Leoni), he uses a snub-nosed Smith & Wesson Model 27 to shoot at Mike Lowrey (Will Smith). The Model 27 is easily recognised because of its high-gloss finish and checkering. It is used in other films too, including The Godfather! 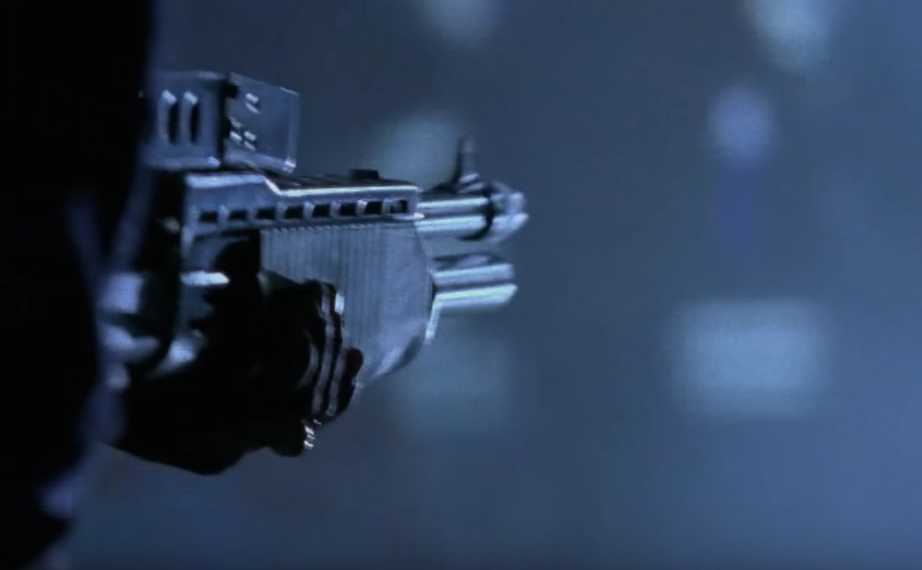 Kuni (Ralph Gonzalez), who is one of Fouchet's thugs, is armed with a Franchi SPAS 12 shotgun while he attempts to take out Julie Mott (Téa Leoni). He ends up blowing a hole in the door of her apartments using the weapon.

The combat shotgun that was manufactured by an Italian firearms company features 12-gauge calibre with a 54.6cm barrel length and weighs 4.4kg. The SPAS featured in the iconic movie Jurassic Park, with many movie fans remembering the ‘Clever girl’ scene.

A Winchester 1300 with a silver finished is used by a gangster when shooting at the Ether truck. Then, later on in the movie, Mike Lowrey (Will Smith) grabs one off of a dead gangster and uses it as his weapon in the final fight. The shotgun first appeared back in 1978 and it is considered a fast-action pump shotgun. 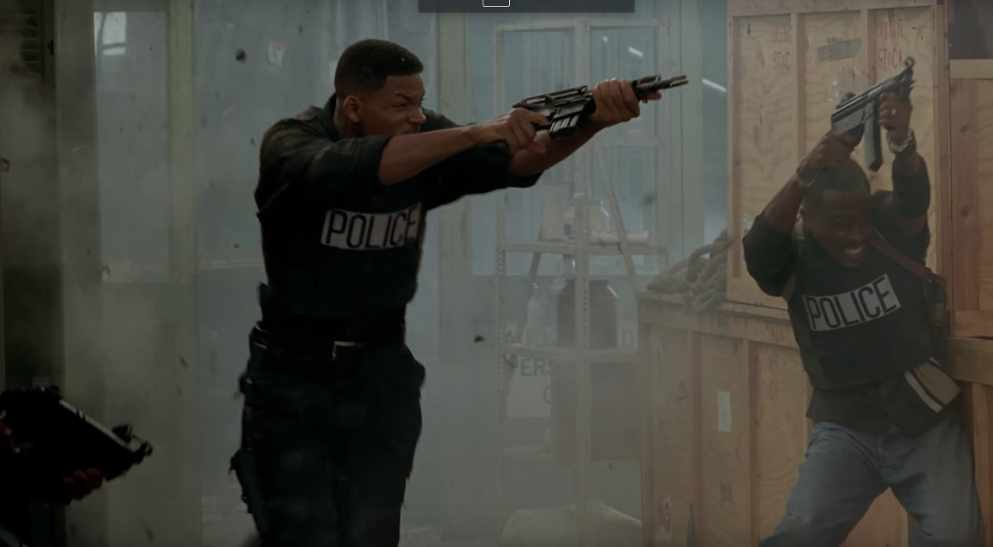 Mike Lowrey (Will Smith) uses an Olympic Arms OA-93, which is fitted with a 20-round magazine, during the final fight. 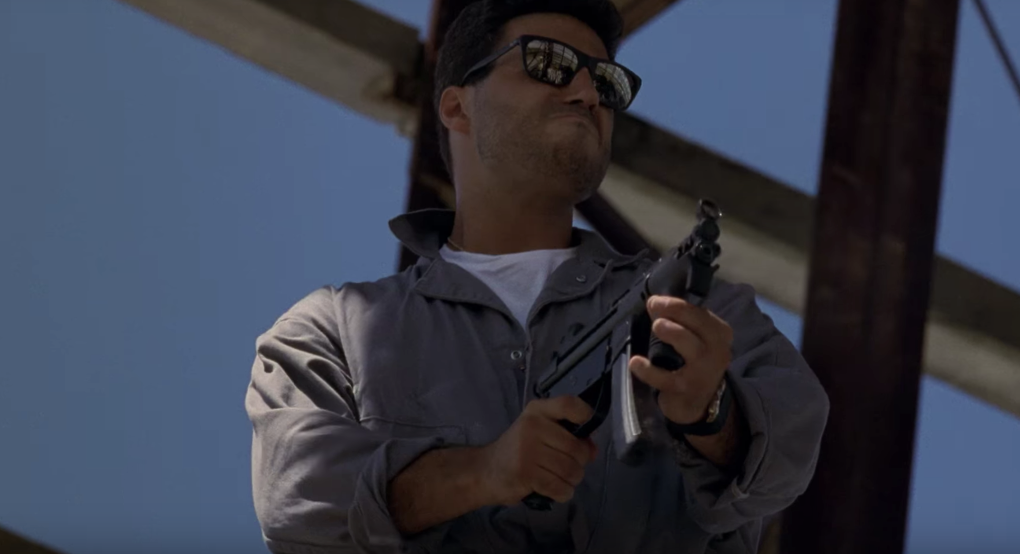 A popular choice of weapon during the final fight is a Heckler & Koch MP5K. Marcus Burnett (Martin Lawrence) uses one, and you can also see a few of the gangsters wielding them.

Here at Surplus Store, we offer a range of Airsoft supplies; from airsoft pistols and rifles to ammunition and accessories, we have everything you could possibly need! To explore our range, you can either browse our website or you can visit our showroom in Crawley for a close-up look at everything.