The History of Hunting Knives 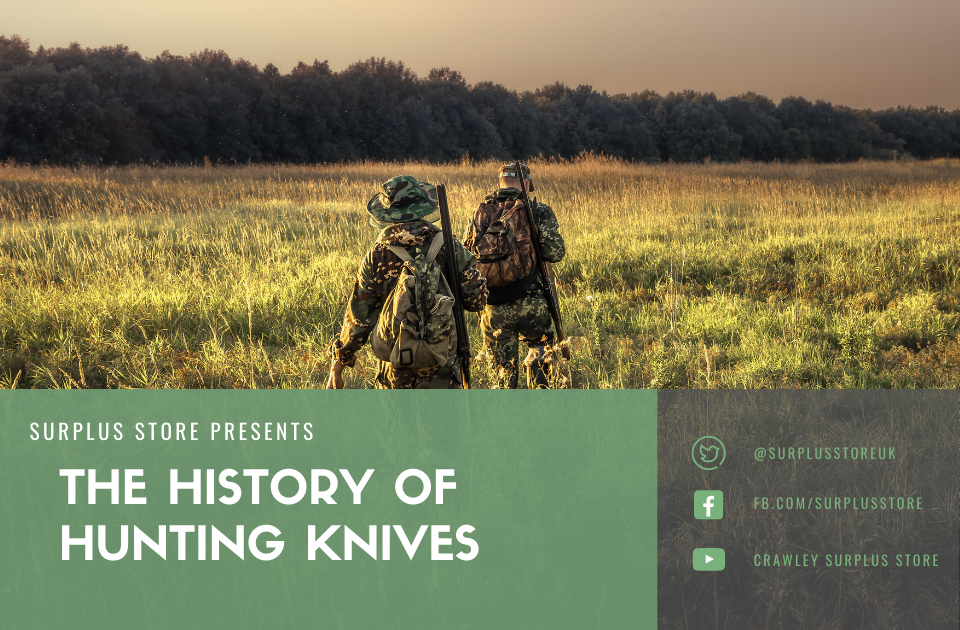 Hunting is one the oldest sports to exist. It has fuelled our evolution and survival. Archaeologists have unearthed what they believe to be the earliest evidence of our ancient ancestors hunting and scavenging. The evidence mainly consists of 2-million-year-old animal bones and stone tools.

In the beginning, hunting was a necessity; it provided food, clothing and tools. Alongside the evolution of hunting, its tools and methods have been refined by ingenuity. Weapons have developed from simple stones to guns and from bones to knives.

Here at Surplus Store, we stock top quality hunting equipment, so if you're looking to buy knives online in the UK, you can be sure to find what you're looking for here!

How has Hunting Evolved Over Time?

Tools and utensils have changed since hunting began, so you can imagine the vast amount of weaponry that has existed and transformed over time.

Unsurprisingly, the humble knife is one of the oldest forms of weaponry; primitive cavemen would chip away at the edges of flint to form an effective blade. As an alternative to flint, bone and shells were also used to make a sharpened point.

First and foremost, hunting was used as a means of survival. Men were required to fight off ferocious beasts outside their homes. Once the battle had been won, no part of the animal would go unused. As well as feeding families and providing essential materials, hunting would also determine hierarchies and leaders of the pack.

During the ancient civilisations of the Egyptians and Babylon, hunting was less focused on survival and became a sporting event and source of entertainment. Prey would be captured and played with in gladiatorial events.

Instead of every man out for himself as it had once been, only a few members of the public were hunters by trade, bearing the responsibility to feed their communities.

Fast-forward to the great Greek philosophers Plato and Pythagoras; the hunting knife had progressed into a bronze plated blade. This was the beginning of the hunting knife we recognise today. By the Roman era, blades were commonly made of steel, a material still commonly used today.

The Industrial period was heavily fixated on the evolution of machinery, stimulating profound changes within hunting. As a result, farming became popular, swaying more toward raising livestock as opposed to practising hunting. Here the sport of hunting began to dwindle.

There are an array of useful hunting knives on the market. We've listed the most popular types and uses below.

The most recognised hunting weapon is arguably the Bowie knife, a symbol synonymous with hunting. The Bowie knife originates from the iconic James 'Jim' Bowie, a 19th-century American pioneer who played a significant part in the Texas revolution.

The Bowie knife is said to be the invention of his brother, Rezin P. Bowie, who created the weapon for his brother to protect him during future battles. Jim went on to modify several Bowie knives to perfect the design for hunting and combat.

The classic characteristics of the Bowie knife include a large, fixed blade and a clip point; many will have an S-guard. An S-guard is a little piece between the handle and blade that will deflect an opponent's knife advance.

The Swiss Army Knife was another iconic development that began in the 1800s. It was used as a primary tool as a multifunctional knife. It is the best option for contemporary workers who use it for an array of activities such as small-scale carpentry or woodsmanship. The knife itself was ultimately designed for the wilderness to aid the user with hunting, skinning and woodcutting.

Are Hunting Knives Legal in the UK?

If you're looking to take your hunting knife out for hunting or fishing purposes, it's best to note that it is illegal to possess any form of a sharply pointed or bladed instrument in a public space for no good reason or under lawful authority. This includes but is not limited to knives, screwdrivers or scissors.

It is illegal to:

Lock knives are not classed as folding knives. They are illegal to carry in public without good reason. a lock knife consists of:

Good Reasons for Carrying a Knife or Weapon

Ultimately, a court will decide if you have a good reason to carry said knife or weapon or if you are charged with carrying it illegally.

What are the Different Types of Hunting Knives?

There are many different types of hunting knives available on the market. Each knife will vary in size and strength so that they are well adapted for different uses.

Uses of hunting knives include:

Different Types of hunting knives include:

What Should I Look For in a Hunting Knife?

The knife you choose should match the strength and size of your hand so that when you holding the knife, it doesn’t slip. When field dressing an animal, your hands will often become covered in blood, which can cause the knife to become slippery, so this is something to be considered. A good grip will help hunters maintain control, avoiding accidental cuts.

Many hunting knives are available on the market; you easily find one that is suited for your needs. If you need any advice selecting a knife, you can always contact a member of our team or refer to our blog!