Jetpacked Soldiers Could Have Been a Thing 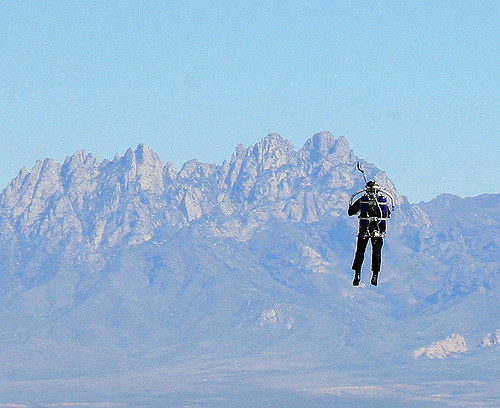 Bell Aerosystems has been building U.S. military helicopters for years now, but in 1967, they pitched something way outside of the box that they believed would revolutionise warfare as the world knew it – we’re just surprised they weren’t laughed off the scene altogether. Yes –you’ve got it from the title – they suggested that soldiers enter battle via jetpacks, and there are some  illustrations that show what this might look like.

According to their plans, Bell Aerosystems thought providing the U.S. Army with a whole family of jet turbine systems would give them a strong competitive advantage, completely disregarding how easy a target these men would be to shoot down by the opposing side. The idea was recovered in a briefing report where the jetpack initiative was entitled “Light Mobility Systems Missions” (catchy!). They drew up sci-fi inspired concepts from single, backpack-style jetpacks strapped to soldiers to platforms that could carry two passengers and go at speeds of up to 100mph.

Bell Aerosystems suggested that jetpack soldiers could go ahead of their units to locate enemy whereabouts and give commanders the time they needed to make the necessary plan of action.

An extract of the Bell Aerosystems report said: “This system is capable of operating over a greater distance in less time than is possible with the ground reconnaissance patrol. It would provide a more responsive means of determining and verifying intelligence which cannot be obtained as rapidly by higher-level resources. Included are missions such as providing point and flank security for moving elements.”

Of course, this is somewhat delusional thinking as we are sure just about everyone would notice a flying soldier peeping on their camp, but we’re not the experts – hey?!

Unsurprisingly, the U.S. generals never bought into the compelling concept of LMS, even with the infinite funds they had for national defence back in 1967 (two and a half times the budgets they have today!). And it’s apparent why when you read it.

In almost every depiction of the soldiers with jetpacks, they seem rather exposed to enemy fire, purely because of how low the soldiers were to the ground – further emphasising the first weakness of LMS by highlighting them as the primary targets. In the Vietnam war, the U.S. lost 5,607 helicopters which just goes to show how vulnerable low target aircrafts were.

The report also emphasised another weakness: soldiers would have to carry weapons that had minimal recoil. Although, they never mention why, we can only assume it was so the soldiers didn’t spin out of control.

And, not to be forgotten, the jetpacks would need a lot of fuel for limited flight times, rendering them pretty useless on the battlefield.

Nevertheless, Bell Aerosystem believed these jetpacks would be the next big thing for U.S. warfare. They even suggested them as a way for getting propaganda out there, with aerial loudspeakers fitted to the machines. These loudspeakers could also be a way to distract adversaries as the Americans were sometimes known to play music on the battlefield to confuse their enemies.

The versatility of the jetpack was demonstrated in a two page illustration, showing the vast imaginations of the Bell Aerosystems’ inventors, who believed they had invented the ‘it’ tool for all future warfare. Well, we’ll have to wait and see on that one…

You can view the illustrations here.

Would you enter a skirmish, airsoft rifle in hand, via jet-pack? Let us know!