M1 Garand: The Most Expensive Rifle

Referred to as “the greatest battle implement ever devised” by General George Patton, an M-1 Garand was the most expense rifle ever auctioned according to a recent article by Forbes.

History of the M1-Garand Rifle

World War I had taught the military the value of heavy firepower, and with the end of the war in 1918, research and invention soon began to make an auto-loading infantry rifle that would prove useful in years to come. Many inventors had submitted designs over the next ten years, although, none proved successful as they were either too heavy or too light with small calibres that they weren’t able to deal with the process.

John C. Garand submitted his plans in 1917 for a light machine-gun project and soon carved a place for himself in the weaponry industry as a genius. Recognised in his field, Garand worked as an engineer in the Springfield Armory in Massachusetts where he designed and developed the M-1 or the United States Rifle, Caliber .30 M1, as it is officially called, which was designed in 1932. Instead of getting money from his design, Garand donated his M-1 rifle patent rights to the U.S. government.

Nick-named after it’s inventor, the iconic M-1 Garand is a gas-operated semi-automatic that was recognised as a ground-breaking weaponry development of its era due to the fact it could be fired and reloaded quickly, making it a game-changer in military warfare. 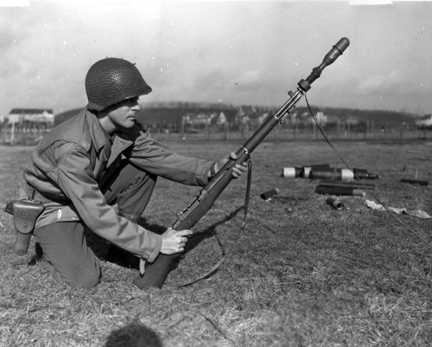 The rifle was celebrated for its improved accuracy and reliability at the time, making it one of the key weapons in World War II. Its first (documented) use in warfare was in the war was in the U.S. Army against the Philippines in 1941-42, and it remained as a standard service rifle of the U.S. Army until 1957. It was even used in the Vietnamese/American war as a sniper rifle and is still used to this day in the United States Marine Corps Silent Drill Platoon.

Garand remains a patriot, and the M-1 Garand is still considered one of the best infantry rifle of all time. 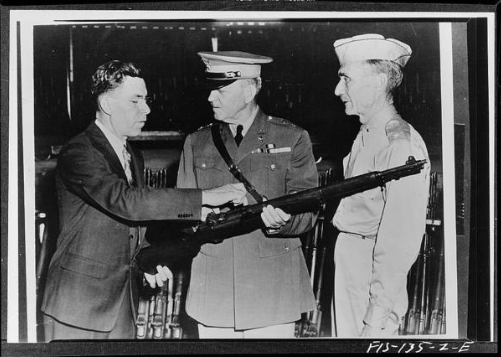 Springfield, Massachusetts. John C. Garand, inventor of the Garand rifle, pointing out some of the features of the rifle to Major General Charles M. Wesson during the general's visit to the Springfield arsenal. At right is Brigadier General Gilbert H. Stewart, commanding officer of the arsenal.[/caption]

The Most Expensive M1-Garand Rifle

The condition of the rifle and its original presentation case were “exceptional” according to the auction site Rock Island Auction Company and noted as a “rare, one-of-a-kind” item.

You can purchase your own airsoft rifles with our selection in Surplus Store; we even have M1 Garand 6mm airsoft electric assault rifles available for special order, without the huge price tag Garand’s personal rifle went for!