Military Weapons That Could Have Transformed Wars

For hundreds of years, there have been inventions of weapons during wars which have altered the outcome of wars, from guns to tanks and even nuclear bombs. These weapons are effective in so many ways, and it begs the question, what other super weapons did the U.S. military have up their sleeve that they didn’t use in war?

Weapons die for all manner of reasons; they happen at the wrong time, fall victim to possession fights between services or just die because they were a bad idea in the first place. Let’s take a minute to be grateful weapons such as air rifles were not cancelled before seeing the light of day, or we wouldn’t be here today! We have taken a look at two weapons systems started by the U.S. military that died a quick death but could have had a huge impact if they had actually been used in war (though maybe not changed the overall outcome).

The A-12 Avenger (concept art pictured above) was a subsonic stealth bomber and was developed in the 1980s as the U.S. Navy needed a stealthy strike bomber that could take off from aircraft carriers. The A-12 combined stealth with the flexibility of carrier ops and promised an unparalleled deep strike capability. Even the Air Force were interested in it as a replacement for the F-111 Aardvark.

But problems arose, as the stealth coating substantially increased the weight of the A-12, and the expenses designing and engineering the craft soared. The biggest problem was that the conception of the A-12 came about as the Cold War was coming to a close. Faced with a tight defence budget, the A-12 was killed in favour of less risky programmes.

The effects of this cancellation are still felt today. Instead of a technologically advanced stealth bomber, the Navy had to contend with the Super Hornet, an upgrade on the F-18s it already possessed. But the continuing need for a stealthy carrier-borne strike aircraft would arrive in the form of the F-35C, a program which teeters on the brink of disaster.

Even if the F-35C works out, the Navy gave up on deep strike missions when it settled on the Super Hornet, and the Air Force is concentrating on the Next Generation Bomber, a project that resembles the A-12 Avenger in many ways. In effect, the death of the A-12 transformed the nature of the U.S. Navy carrier wing for the next generation. 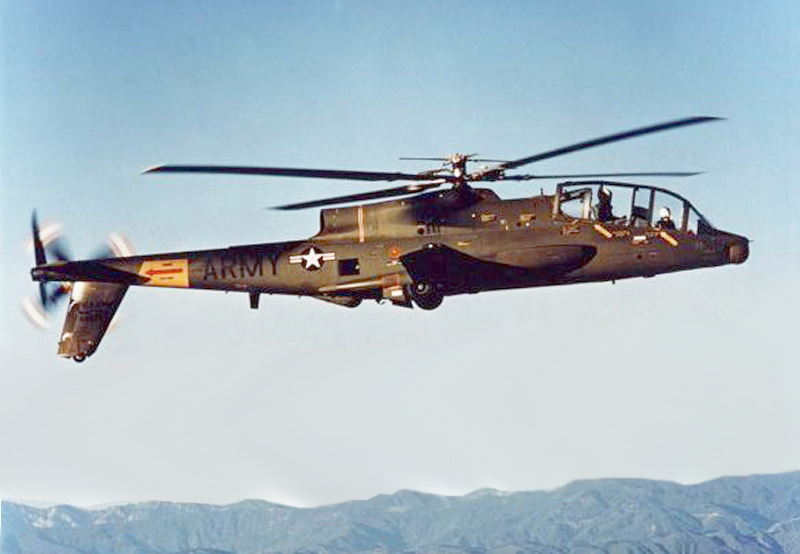 Back in the early 1960s, the U.S. Army were beginning to appreciate the value of helicopters, which had been used at the end of World War II and in Korea for reconnaissance and evacuation. As the technology for these machines developed, the Army began to see the prospect of more advanced helicopters. The star of the show was to be the AH-56 Cheyenne.

The AH-56 had a radical design that combined high speed with punching power. The helicopter would be used to escort others in transport missions, conduct ground support and attacks ops independently. It also contained a propulsion system which could offer high speeds of 275 miles per hour.

Sadly, the AH-56 fell victim to its own promises; the technologies required for it weren’t fully developed and early prototypes led to a fatal crash. The Air Force also didn’t like the AH-56, feeling like the Army was trying to take air support for itself, and even suggested their own attack aircraft. Then the Vietnam War happened and put pressure on the defence budget, so the AH-56 Cheyenne never happened. However, a few years later the Army pushed forward with the AH-64 Apache, which turned out to be a much safer machine than the Cheyenne. Cancelling the AH-56 merely delayed the development of advanced attack helicopters in the Army.