Pros and Cons of Starting an Airsoft Team 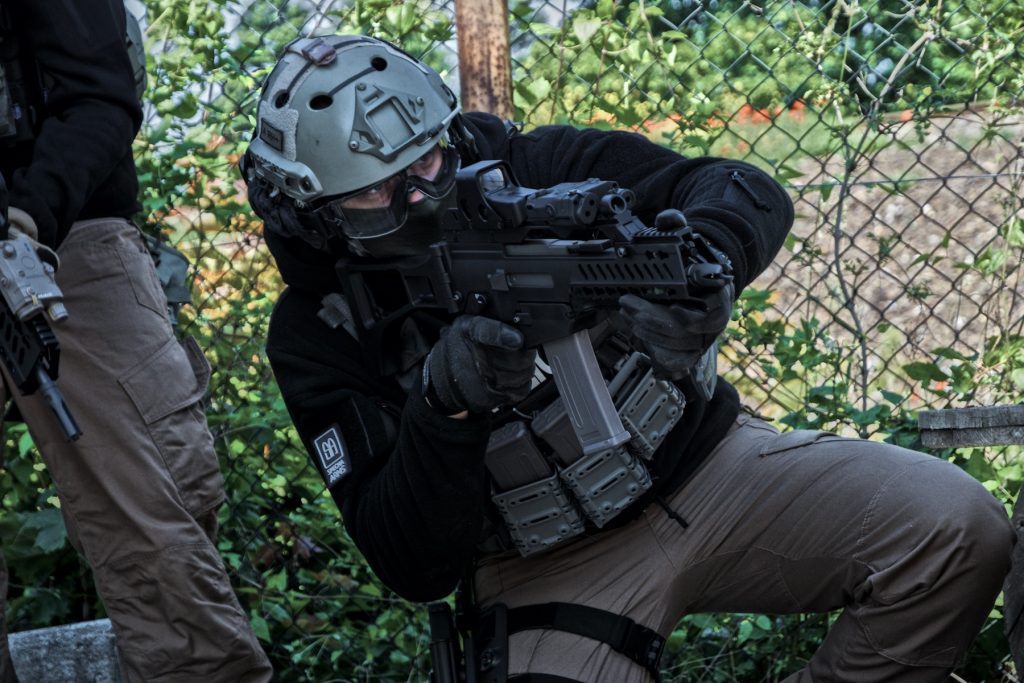 Regardless of your experience in the sport, from novice players that have only recently taken part in their first skirmish, to more seasoned players that have a few more games under their belt, you may be considering joining or forming a team. Alternatively, you may already be a part of a team, in which case, we’d love to hear your thoughts on this topic, as it is an often discussed one within the community. There are many different schools of thought on teams within airsoft, and here we’ll be looking to examine the topic from various different angles.

The definition of a team in airsoft is relatively loose and can sometimes be misconstrued. If you just play with the same folks every other week, without much thought towards strategy, this is not what we are referring to. Instead, when we say ‘team’, we mean a group of players that have consciously branded themselves as a team, rather than ‘teaming up’ on a game day. Although not always, in most cases forming a team signals an increased competitive nature towards the sport.

In previous blogs, we’ve tackled the topic of forming a team and training as a team in airsoft, so we’ll skip over these sections of the conversation and get right into it, starting with the possible benefits of forming a team:

Pros of Forming an Airsoft Team 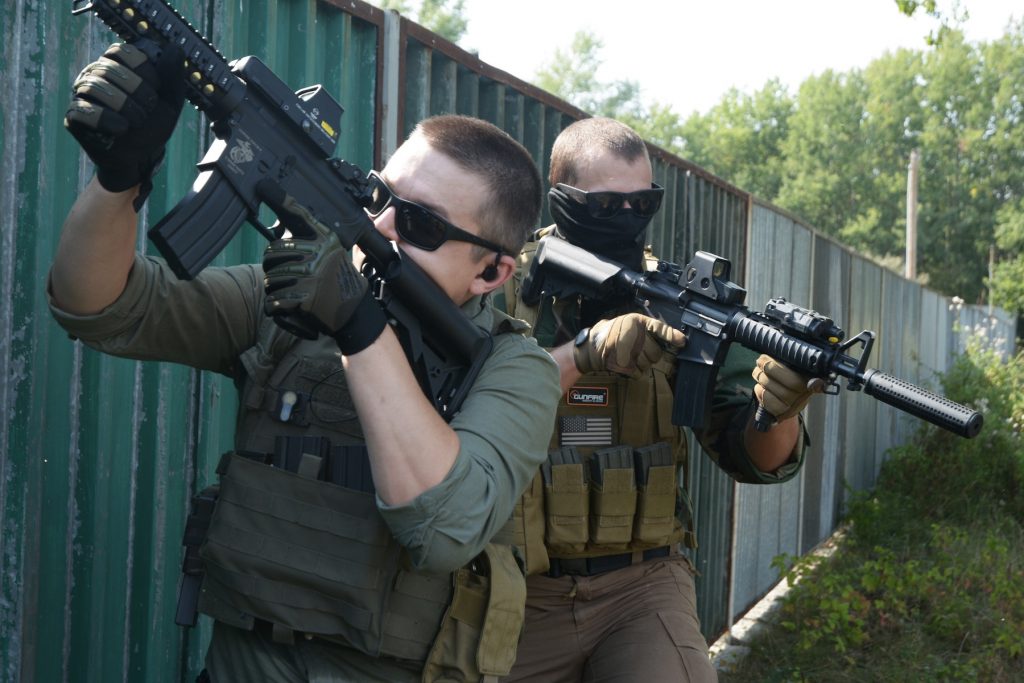 By no means is this guaranteed, and it is also very subjective as to what you define as ‘quality’, but as a sweeping statement, a cohesive team can be a real threat on the battlefield. A team that performs well, with a shared understanding and strategy, can really control a game. However, there are a lot of things to consider with this.

Forming a team often requires all players to sacrifice something from their solo style, whether this is their K/D ratio (i.e ‘taking one for the team’), their playstyle, or using specific equipment in their loadout. A cohesive team requires players to be flexible and adaptable while being able to play towards a shared objective, rather than having an excellent individual performance. For some players, this can create an environment in which they thrive, wanting the team as a whole to share the success, rather than basking in their solo glory.

Additionally, being part of a team of players that are all experienced in their own right can make weaker members ‘play up’ to it, as in, raise their game to fit into the team. Seeing others in the team perform well can be inspiring for newer players, allowing them to learn from watching and doing. This can be a double-edged sword, which we’ll get onto in the cons section.

Being part of a team of like-minded, airsoft-playing individuals can be great fun, especially when everyone gets on. Whether this is on the field or in your own time, it can be a great social addition to your life. Often, people choose to form teams with friends and family, so it’s important to remember that no matter what happens on the field, this shouldn’t affect your personal life.

We’ve heard fantastic stories about airsoft teams doing social events, meetups and all sorts of great stuff. We love that people who have met on the airsoft field have formed real-life friendships, it’s a great advert for the sport and something that isn’t talked about enough. 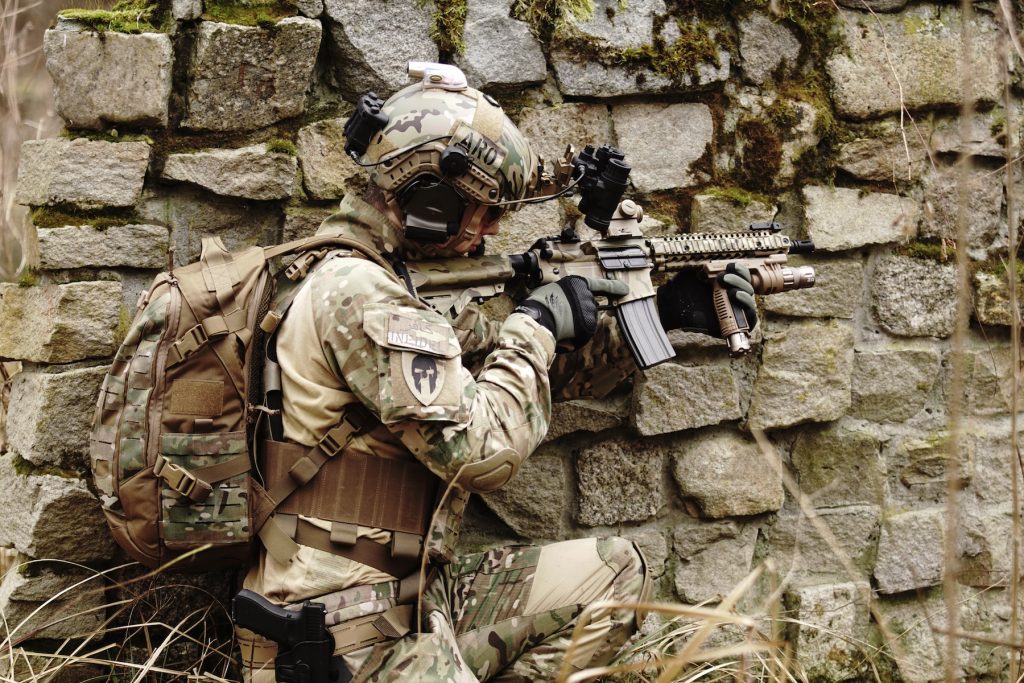 Similarly, forming a team can be a great way of meeting like-minded people, whether this is people that share your affinity for airsoft, have similar backgrounds or just like the same guns as you. Granted, this is more than achievable in day to day airsofting, so a team is not at all mandatory to meet people, but it can be a great option. Additionally, if you’re the one leading the team, then it can be an excellent way to pick the folks to join that share the same views and opinions as you.

One of the big pros of having a dedicated team is the ability to train with players of a similar skill level without having to head solo to an airsoft field. Whether you choose to train with or against your team, this can be a great way to hone your skills and build the ability of the overall group. Some sites like to run training days, for this reason, taking the pressure off and allowing you and the team to try different play styles and tactics.

Cons of Forming an Airsoft Team 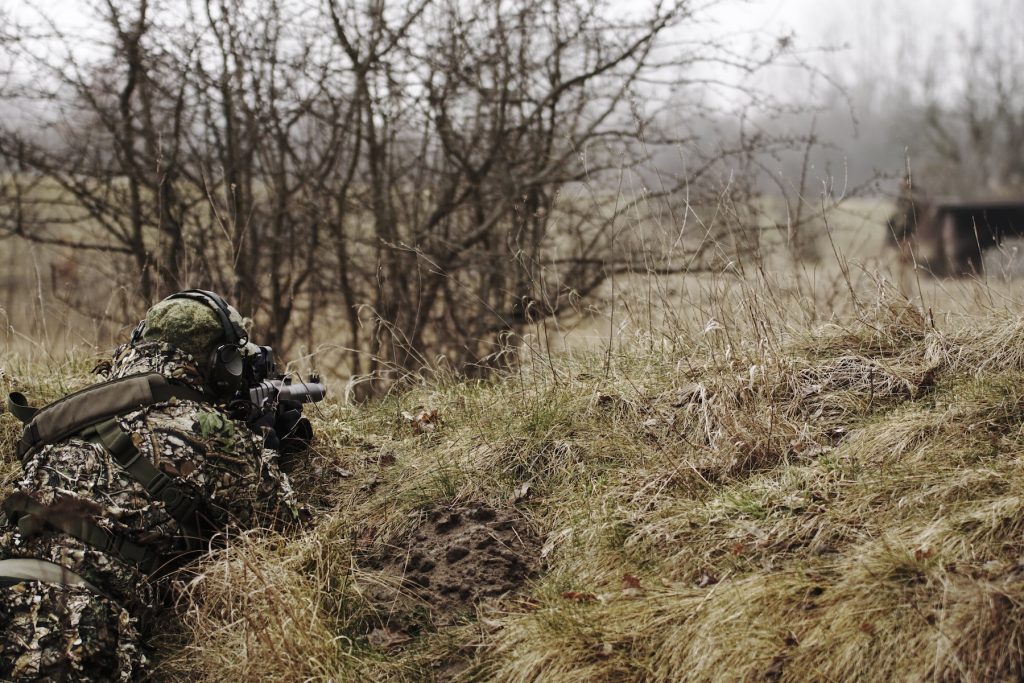 One of the bigger downsides to forming an airsoft team is the commitment of time and attitude that it requires. If you’re the ‘founder/leader’, you’ll likely spend a lot of time trying to organise game days and getting numbers for each session, which can be time-consuming, to say the least. You’ll also need to take care of any admin that comes with running a team, such as bringing in new people, getting patches etc. (depending on how seriously you take it).

If you’re planning on joining, without playing a leading role, then there will still be some level of commitment. All teams are different and will ask different things from you, so be aware of any expectations that may be placed upon you. Some teams take the sport more seriously than others, with some wearing matching gear, patches and operating a comms setup, or others just enjoying the fun of the sport. Neither way is wrong; it’s just what works best for you.

Linking into the above, one of the cons that comes with being part of a team is potentially having to play with a more rigid structure. For outdoor all day skirmishes, typically the start and end times won’t vary, but for indoor events, it can be hard to get a decent number of people who are all available at the same time.

Similarly, as much as we’d all like to dedicate evenings and weekends to airsoft, the reality is much different. We all have families, work and other commitments that cut into our valuable airsofting time. This means that teams with a more regimented structure can struggle to play regularly if they don’t employ a flexible policy.

Too Much of a Good Thing

As we all know, it’s possible to have too much of a good thing, and airsoft is one of those things. As it’s something we need to travel for, prepare for and can’t do as often as we’d like, it makes the days that we do head out to the field or arena ‘special’. As much as daily airsoft sounds like something of a treat, we’d guess that people would soon fall out of love with the sport if they played daily.

Playing in a team can cause some people to fall out of love with the sport, as it becomes more competitive, and there is either internal or external pressure to perform well on the field. Although this doesn’t happen often, it should be noted as a possibility.

Depending on the team you join, there is the possibility of limited flexibility in terms of playing times, locations and play styles. If a team plays at a certain arena of field, then this could mean you have to travel further, or you stop playing all together at your favourite location, although it should be noted that most teams travel and play at various locations. Similarly, playstyles and roles can vary from team to team, so joining one could mean that you need to conform to a particular style that doesn’t suit how you play. 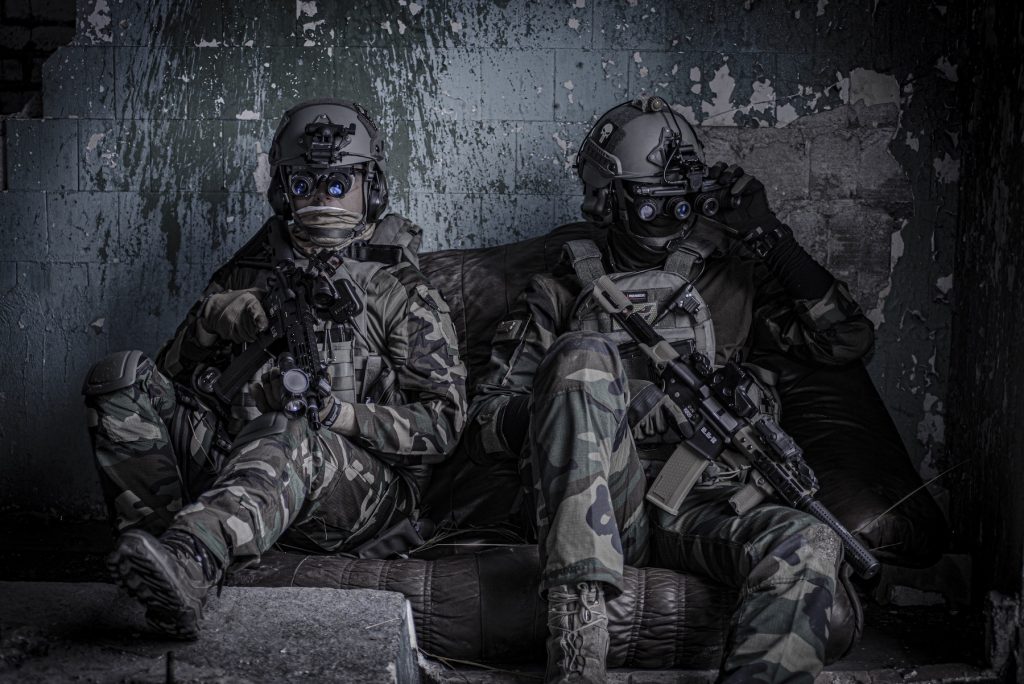 By this, we mean that if you are wearing a team patch, you can be seen as accountable for every one on that team’s actions. This swings both ways; it can be great if your team has a good reputation, but if the team has let one or two less than fair players join, you may find their bad sportsmanship becomes seen as yours.

Be careful about who your team of choice lets in, a few membership requirements (basic skill, sportsmanship etc.) go a long way!

It’s worth pointing out that many of these negative points are worst-case scenarios, definitely not day to day occurrences. We’ve tried to look at the topic from various angles and based on our own knowledge, what we’ve seen in forums and heard around the sites, to put together this list.

Airsoft has always been, and remains to be, an honour sport that requires a level of honesty much higher than that seen in other competitive sports. Cheating, although present in the game, is a rarity, and we’ve seen competitive players let it get to their heads too much. Playing in a team works really well for some and not so well for others; it really depends on the person and the team.

Generally, teams that we have seen be successful, both on-field and in terms of longevity, have come together organically, rather than specifically setting out to become one. Equally, this is a slow process, so shouldn’t be forced or rushed.

Whether you’re running and gunning on your own, or as part of a squad, make sure your kit is the best it can be! From top-notch airsoft rifles to all the accessories you need on game day, find them all on our online store!