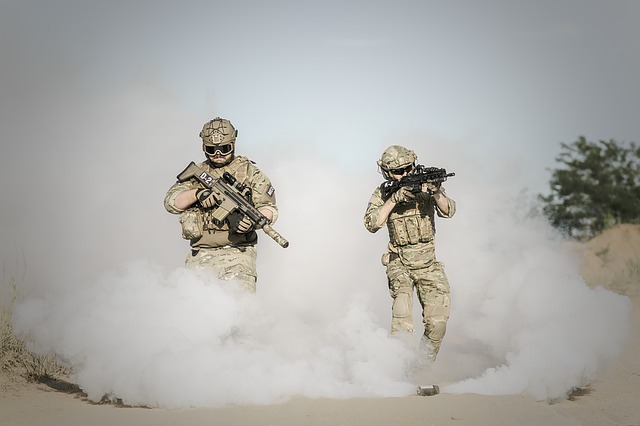 In today’s edition of “I wish I could have that fitted to my airsoft guns because it’s super awesome”, we have the PEARL; a small, portable system that can be attached to firearms to tell the user where hostile gunfire is coming from.

The PEARL system was created by the French defence contractor Metravib and uses acoustic sensors to identify the source of gunfire. It works by detecting the shockwaves that are generated by muzzle blasts, which travel through the air similar to radar or sonar waves and can radiate from all directions. By using advanced acoustic sensors, PEARL can track them back to where they have originated from.

Now, this isn’t a particularly new form of technology, as “shot-spotting” tech has been around for some time now. However, the PEARL system is the first that is small enough to be able to mount to a rifle or helmet. It simply needs to be fixed to the Picatinny rail, and it points the user towards the source of the gunfire using some rather handy LED arrows.

PEARL can provide the azimuth (think of the directions found on a compass) and elevation of the shots being fired, which allows the user to more accurately locate the threat and act accordingly. The system is accurate with +/- 7.5 degrees azimuth and can pick up on small and medium calibre weapons. This means it can likely identify shots ranging from pistol calibres to 7.62-millimetre machine guns.

The system has been designed to work effectively in mountainous and urban terrain where gunshots might echo and bounce off multiple surfaces. It can also apparently tell the difference between friend and foe, filtering outgoing fire from friendlies out. We’re not sure how this happens, so we’re going to put it down to science…

What’s more, it has been described as being “soldier-proofed” with all of the wire being self-contained and only having three control buttons on the interface, rather than looking like something that should be found in the Millennium Falcon.

The company describes the system as a “soldier protection”, but it certainly has offensive applications too, thanks to its ability to trace hidden enemy forces and allowing friendlies to root them out.

Even though it is a newly announced product, Metravib has hinted at the fact that the technology is combat proven, going as far to hint that it has been used in theatres around the world, including Iraq, Balkans, Mali and multiple other areas. Not only that, but a more advanced version called the PILAR system is also available. Using the same concept, the PILAR goes one step further by telling users the range of enemy gunfire and displaying the GPS coordinates on a map to help pinpoint the source.

Now, we know this couldn’t really work in airsoft as there are no muzzle blasts, but we can dream, right?! Let us know what you think of the PEARL system and its capabilities on our social media accounts or drop us a comment below!