Tales of heroism, courage and friendship from the Harlem Hellfighters 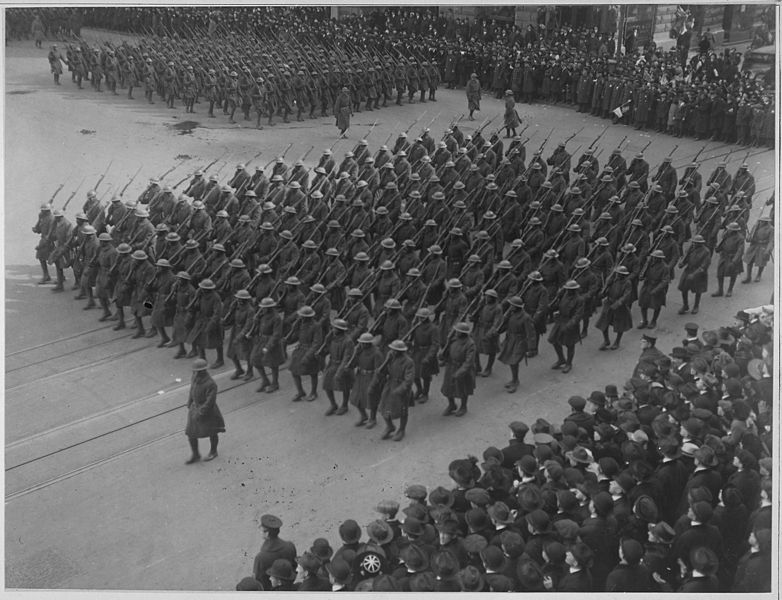 This year marks the centennial of the entrance of the United States into World War I; a war that would change war forever. There are countless stories of incredible feats of heroism and unbelievable hardship, and many of them involve the 369th Infantry Regiment.

The 369th was the first black American infantry regiment to fight in World War I and they spent more time under fire and in the trenches (191 days in total) that any other United States unit. A National Guard regiment, the 369th were recruited from New York City in large numbers and soon became known for their fearlessness and battlefield prowess, which led the German soldiers to give them a nickname; the Harlem Hellfighters.

One of the most decorated American units of the war and the first U.S. regiment to cross into Germany over the Rhine, here are some tales of heroism, courage and friendship from the 369th.

They had to overcome racial segregation

By the time the United States joined the war, its allies were near broken and in desperate need of reinforcement. In spring 1918, the 369th were sent to assist the French Army’s 16th Division on the Western Front. Although it was strategically necessary to send them there, as the Western Front was in desperate need of reinforcement, it was also driven by racial bias, as many white American soldiers refused to fight alongside their black compatriots.

After being “handed over” to the French, the 369th encountered some small-arms issues. According to Stephen L. Harris’ book “Harlem Hell Fighters”, the regiment had little combat training in the States and were issued with Springfield rifles, but they had to give them back after being reassigned, along with every bit of American gear they had, including Army greens, helmets and even food rations.

In place of the Springfield rifles, the 369th were armed with the French Lebel rifle. Although it had a reputation for being reliable, it had its downsides, which included:

Some members of the regiment were disappointed with the switch, including Capt. Hamilton Fish. According to Harris’ account, Fish said:

“Their Lebels were nowhere near as good as our Springfields. The French, you see, were great believers in the hand grenade — their rifles seemed more or less something to put a bayonet on.”

By the time the 369th made it into the trenches, each member of the regiment had been paired off with a French counterpart to try and form some level of cohesion within the ranks, something which would have been unthinkable in the American military at the time. Once paired off, they trained intensely for three weeks, near the front line and amid sporadic artillery and aircraft attacks by the Germans. 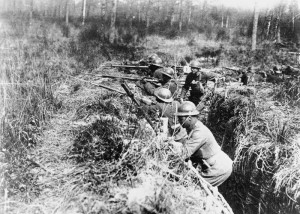 The Hellfighters on the Western Front with their French counterparts[/caption]

The Hellfighters quickly learned tricks of trench warfare from their French allies, according to the book, “A More Unbending Battle: The Harlem Hellfighters’ Struggle for Freedom in WWI and Equality at Home,” written by Peter N. Nelson.

Those tricks included carving grooves into the mud wall with shovels to make it easier to climb out of the trenches, cutting the tails off their overcoats so they wouldn’t get weighed down with mud and water and curling up balls of barbed wire during the day so they could be carried with ease and quickly unravelled to reinforce defences during the night.

Over half a year in the trenches also taught the men when to take cover or to be wary of a gas attack (when the wind was blowing towards your lines) and soon these things became second nature.

During May 1918, members of the 369th were assigned to stand watch in the Argonne Forest. On the 14th May that year, two soldiers, Pvt. Henry Johnson and Pvt. Needham Roberts were attacked by a German raiding party (the exact number of German soldiers is debated by historians, but is believed to be between 12-24).

The two men fought off the initial attack, but Roberts became badly injured. Staying by his side, Johnson continued to repel the attack, using grenades, the butt of his rifle, a bolo knife and even his fists. This act of heroism not only stopped Roberts from being captured, but also the lives of other 369th members who were stationed further in the forest.

It was reported that Johnson suffered as many as 21 injuries during the conflict, and even killed a German soldier with his bolo knife, causing the rest of the soldiers to retreat; an act that earned him the nickname “Black Death”. 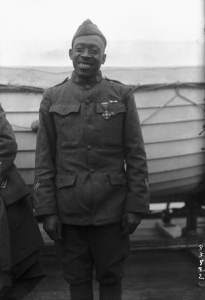 This act of heroism meant Johnson and Roberts were among the first Americans to be presented with the Croix de Guerre for valour by the French military. Johnson also became the second African American to receive the Medal of Honour for actions during World War I, when it was presented posthumously by President Barack Obama at an award ceremony at the White House in 2015.

Friendship bonds were formed for life

The partnerships formed during the conflict soon turned into permanent bonds. One member of the 369th, George Cuffee, became close to his French counterpart, Ruby Garnett, who taught him how to speak French. Cuffee’s family weren’t even aware of this fact, until one night they caught him speaking French in his sleep.

According to Cuffee’s great nephew, Glenn Jones, when asked why he never spoke French around his family, Cuffee replied: “None of you all speak French, why should I waste time talking it to you?”

One night before the Meuse-Argonne Offensive – a giant battle which stretched along the Western Front and lasted 47 days before ending on Armistice Day – Garnett switched his watch duty with Cuffee. Tragically, Garnett was killed in a surprise and his death stayed with Cuffee for years.

Speaking of their friendship, Glenn Jones said: “They were buddies, so they’d be together all the time in the trenches.”

After Garnett’s death, Cuffee “vowed to name his first child” after the man who he had formed such a close bond with, and he did, naming his eldest daughter Ruby Garnett after his fallen compatriot.