The Military History Behind the Star Wars Costumes

We have previously touched on how the Star Wars universe has drawn inspiration from the real world in its films. Our previous article was referring to the blasters that were based on real-life weaponry (you can read said article here), which in turn led to airsoft guns being modelled on them. But now, we are taking a closer look at the costumes from the franchise.

Costume designer John Mollo didn’t have any previous design experience but was picked by George Lucas to design the costumes for the 1977 film ‘Star Wars: A New Hope’ due to his expertise in military history.

Mollo had been fascinated with film and military history since he was a child, with the costumes being particularly fascinating to him. Before he took part in any of the design processes, he had written for historical publications and served as a consultant for historical films.

Star Wars was his first venture into science fiction, which was perfect for Lucas, as he wasn’t going for the traditional “space theme” for his costumes.

Laela French, the director of archives for the Lucas Museum of Narrative Art, has previously spoken about what Lucas was looking for in his costumes:

“George did not want the costumes to look like sci-movies. He wanted them beat-up and dirty, and pulling from US and European military history.’’

The initial production artwork was created by conceptual designer Ralph McQuarrie, with Mollo then drawing sketches to better bring McQuarrie’s concepts to life.

The military element of the outfits is probably best represented by the Imperial Officers, who look like they could have stepped straight out of the history books; but not every character was as straightforward.

Unsurprisingly, the Stormtrooper costume proved to be the most difficult costume for Mollo to bring to life, as he aimed to make them look like an impersonal robotic army, which led him to seek inspiration from medieval knights.

French continued: “They got down to the point where it was four days before they were going to shoot. And they were still not finished with the costumes.”

When it came to the design of Darth Vader, Mollo took a bit of a different approach. Lucas stated he wanted Vader to look like “a dark lord riding on the wind”. So, to make his vision a reality, Mollo took an actor with him into a costume shop in London and started to try some things out.

Explaining the process of how Vader’s costume came to be, French explains how Mollo approached the situation:

“He found a motorcycle outfit, so he put him in that, and he found this long black cape, so he threw that on him. And he found a gas mask from World War I, and then he added a Nazi helmet." 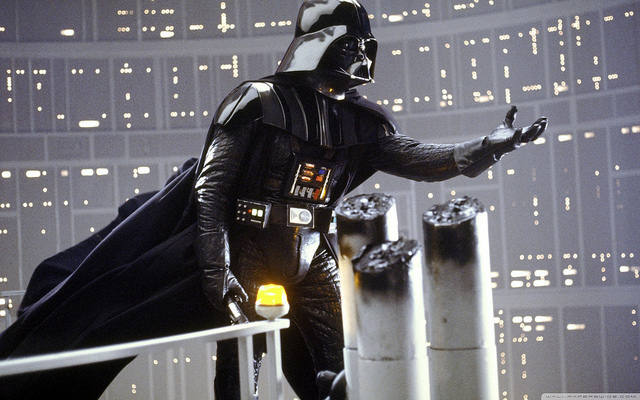 There were also other historical references in the outfits throughout the film, including Medieval, Tibetan, Samurai and Russian Cossack. It is believed that this blend of strange yet familiar details helped to contribute to making the films the success they are today and even earned Mollo a ‘Best Costume Design’ Oscar at the 1978 Academy Awards.

Sadly, Mollo recently passed away at the age of 86, but his influence on one of the greatest sci-fi trilogies of all time continues to live on, with the modern adaptations following in his blueprint.