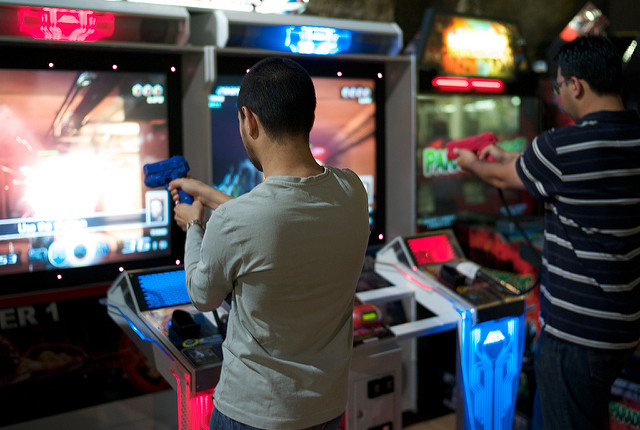 We love airsoft guns, that much is obvious. We also love video games, as highlighted in some of our previous blog posts. So, when we stumbled across the news that those two loves were being combined, we were like the proverbial kids in the sweet shop!

Tokyo Marui has teamed up with companies Taito and Natsume-Atari to work on the GunArena airsoft arcade game, with testing on the machine set to be carried out this June (2018).

While it is not uncommon for airsoft guns to be used in video game arcade machines, this is the first time that actual BBs can be fired at the arcade machine, rather than computer-generated shots like in Time Crisis.

If the name Taito is ringing any bells, it could well because it is a legend in the arcade machine scene. It is the company behind probably one of the most famous arcade games of all time; Space Invaders. However, since 2006 is has been a subsidiary of video game company Square Enix, who are famous for the Final Fantasy series, amongst others.

GunArena will consist of a number of different game modes in which the player will shoot different targets to increase their score. Players will be armed with the Tokyo Marui Glock 18C AEP that is fitted with a sensor attached to the under rail of the pistol which helps to register your score.

The target, or screen, is a 55-inch display that is BB-proof, meaning it absorbs the power of the shot, stops the BB in its tracks and lets it safely drop into a containment unit beneath the screen. Currently being tested in Japan, there are also rumours that you are allowed to bring your own airsoft guns as long as you are over the age of 18.

In order to play, individuals are issued with a membership card once they have signed up and agreed to the terms and conditions. Once this happens, they will receive a QR code printed on the card which needs to be scanned before the game can be played.

Once all this has happened, one of multiple game modes can be selected, such as a police training mode, target practice and a game that is similar to darts, amongst others.

So, the next big question is, will these be available outside of Japan?! Well, we can’t give a firm answer on that sadly, but we’re guessing it will depend on how the testing goes and how well received the arcade machines are.

It’s worth remembering that the machine will require an attendant who will replace the batteries and top up the magazines of the electric pistol, for those who do not bring their own gun. If this is the case, we might not see these machines in every seaside arcade but could see it at skirmish sites, or firing ranges around the UK! Although it might be a big ask with how guns are portrayed in the country, but we can dream, eh?!

Check out the GunArena site for some videos of how the games will look in action and let us know what you think of the idea in the comments below or on our social channels.

Image courtesy of Mohamed Nanabhay under CC BY 2.0