Why Do Olympic Sharpshooters Wear Those Odd Glasses? 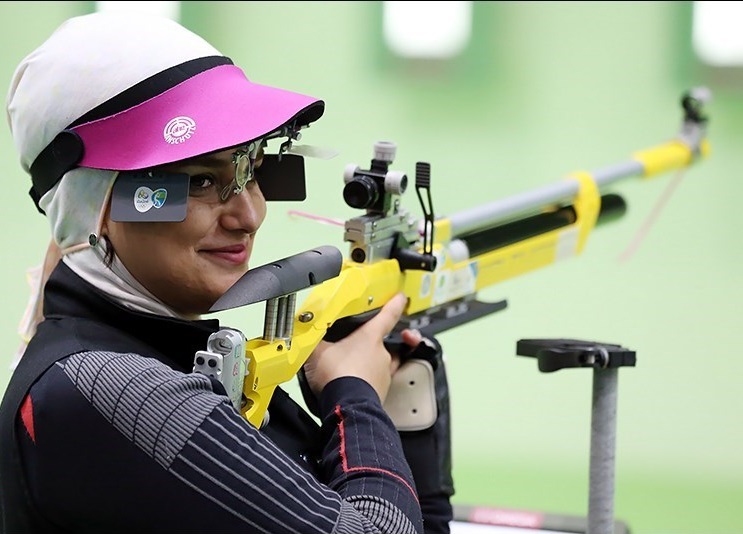 The Olympic air gun shooting events require a great deal of skill, serious amounts of concentration and apparently a weird pair of glasses…

You may have seen the Olympic shooters rocking a set of glasses which look like a cross between horse blinkers and something you wear at the opticians, but do you know what they actually do?

Well, it’s obvious I hear you cry, they help the athlete to see better! While you wouldn’t be wrong, they actually do a lot more than that. Allow us to explain.

The key to sharpshooting isn’t really about focusing on the target you are trying to hit, but more about aligning your mark with the front and rear sights of your firearm, which in this context would be Olympic air pistols or air rifles.

Scott Pilkington, a gunsmith who has worked with past Olympic marksmen, states: “The ability to hit the target is your ability to correctly hold those two alignments points up against the target.”

Doing this is harder than it sounds, but shooting glasses help to make it easier thanks to some intricate optical trickery. Shooting glasses look very complex, and this is because they are just that! They can be fully customised to suit the shooter’s exact needs thanks to many changeable pieces. For example, a pair from Swiss manufacturer Champion’s Choice is made from nearly 100 different parts! 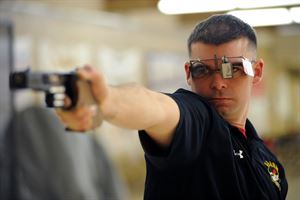 That being said, even the most complicated of glasses come down to three basic but distinct parts: a mechanical iris, a lens and a set of blinders. The lens can be altered to the shooter’s prescription, but that isn’t what it is primarily used for. A resting eye would rather focus on something in the distance than something that is closer at hand. Concentrating on something close to you takes effort, which can lead to fatigue.

But adding just a touch of lens power to the shooter’s prescription can help to bring the gunsights back into focus and keep them there, even if they are concentrating on lining them up with a target in the distance.

However, this comes at a cost! Bringing the gun’s sights into sharper focus can make the target go fuzzy, which is where the mechanical iris and blinders come into play.

Imagine you were armed with a camera instead of a rifle or pistol. If you wanted to bring your target back into focus, you would simply need to narrow the aperture of the lens. This increases the range of distance in which objects will appear in focus, also known as the “depth of field”.

A shooter will mount their mechanical iris to their shooting glasses just behind the lens, allowing them to control the depth of field of their vision. Twisting the iris narrows the aperture and reduces the amount of light that reaches the shooting eye, which brings the target and both sights into sharper focus than is possible without the glasses. The less light you endure, the greater your depth of view will be.

The blinders help to serve a similar purpose by reducing the amount of light entering the shooter’s pupils, but they also work to obscure the movements of other shooters and aspects that might distract them. Some shooters will use the blinders to block the vision of their non-dominant eye.

It may sound excessive, but for the margins that professional shooters work to, millimetres can make the difference between first place and last place!