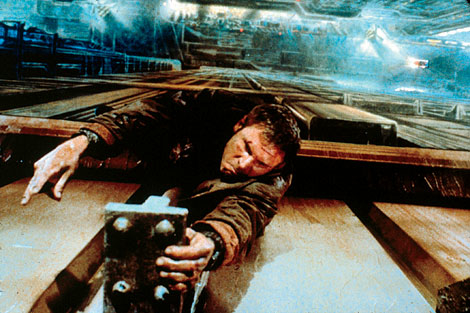 Please note – there are no spoilers in this article so if you haven’t seen Blade Runner 2049, you are safe in the knowledge that we haven’t ruined it for you!

Adam Savage, everyone’s favourite Mythbuster and all-round geek (in the best way!) is no stranger to a science fiction weapon. It was nearly a year ago that we wrote about him finally completing his Fifth Element rifle replica (which you can find here), and now he is back investigating the firearms from another classic sci-fi film; Blade Runner.

Much like a giddy child heading into a sweet shop, Savage visited Blade Runner 2049 prop master Doug Harlocker to clap eyes on more than a dozen blasters from the new film, as well as from the classic ‘80s film.

Savage has had an obsession with Blade Runner from a very early age. A blog written by the man himself talks about where the obsession started, with him at the age of 18 living in New York making sketches of the blaster wielded by Rick Deckard (Harrison Ford) from a paused VHS version of the film.

It wasn’t until he was in his 30’s that he painstakingly built the blaster from a photo and made it in resin; he even weathered it, so it looked authentic. However, being the stickler for detail that he is, the gun was “20% too small” compared to the film version!

Eventually, after “about 30-40 hours of labour spread out over (at least) 6 years”, Savage had his final version of Deckard’s gun. This gun was based on a Charter Arms Bulldog .44 SPL revolver inside a Steyr Mannlicher .222 Model S bolt-action rifle receiver, so naturally, only original parts from the respective firearms were used in Savage’s build. He made it as painstakingly accurate as possible, and we tip our hats to the man for his efforts!

Even though Savage has spent so long building his own gun, he couldn’t wait to get his hands on the film prop of Deckard’s original LAPD 2019 blaster. Unlike his own version, this one - with a few tweaks - was able to fire blanks for the film.

Sadly, the new film doesn’t quite take the same route as the old… Unlike many films where the props are made from deactivated or airsoft guns (such as the Star Wars films), Blade Runner 2049 has a single LED on a firearm with the muzzle flash then added later in post-production via CGI.

Harlocker also explains the multiple versions of each blaster which are made for the film. This includes a version made completely of rubber, which looks identical to the naked eye (but would probably hurt a lot less if it cracked you in the face during a stunt!).

This also isn’t Savage’s first experience in the Blade Runner cinematic world. There were a number of short films released in the run-up to 2049 being released, helping to fill in the gaps between the original film and the new release. Some of you eagle-eyed fans out there may well have noticed that he made a guest appearance alongside Dave Bautista in Blade Runner 2048: Nowhere to Run.

Take a look below at Savage discussing the details with Harlocker and admire the details that go into these firearms. Savage even hinted that he might have a go at making one of the new ones for himself; let’s just hope it doesn’t take him six years like Deckard’s build or 17 years like his Fifth Element gun!

Photo courtesy of Ian Dick on Flickr, under Creative Commons