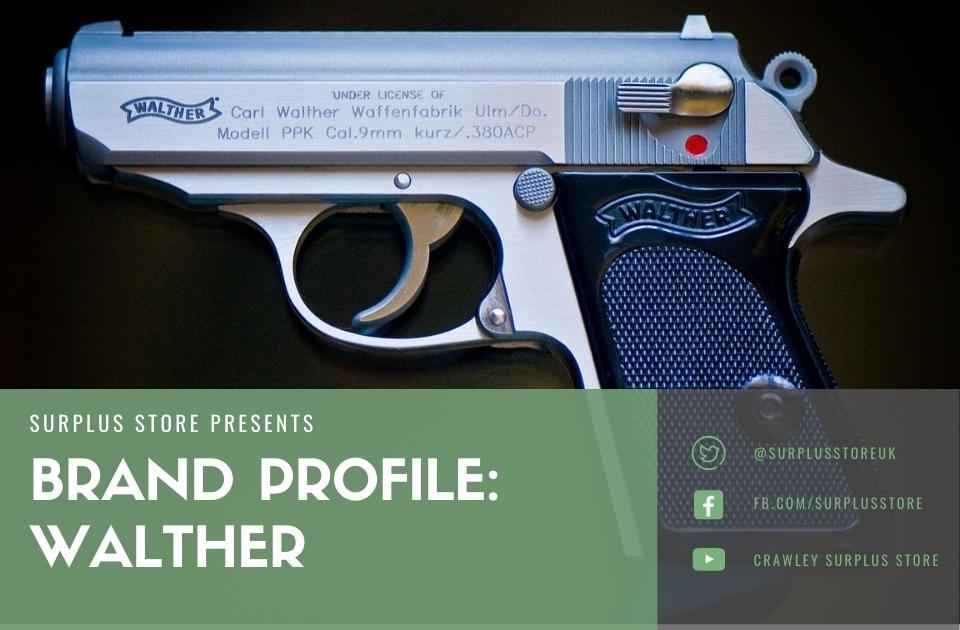 Thanks to the promotion of the Walther PPK in the early James Bond film franchise, Walther is recognised as one of the most iconic gun manufacturers across the word.

Producing air guns and firearms for over 100 years, Walther has a fascinating history leading up to the established brand it is today. The brand has been popularised with shooting sports fanatics and is the natural choice for competitors with the company’s regular appearance in the Olympic Games.

The History of Walther

With over a century of experience in the creation of weapons, Walther has an interesting journey to the reputable firearm and air gun manufacturer it is recognised as today.

Starting in Germany in 1886, the company is officially named Carl Walther GmbH Sportwaffen. Unsurprisingly, it was Carl Walther who set up the company. However, many of the company's advancements derived from his son, Fritz Walther. Fritz was fascinated by and introduced semi-automatic technology to the brand which launched the company.

In 1908, the Model 1 prototype was created and officially released as a Walther product in 1911. It was a blowback actuated handgun and was snapped up in both Germany and Austria-Hungary where it proved to be popular.

Walther PP models, short for Polizeipistole (which translates to police pistol in English), were popularised in 1929 after their creation. The PP production lead to the development of PPKs Polizeipistole Kriminalmodell (AKA Police Pistol Detective Model). In 1938, Nazi Germany replaced their P-08 Luger contract with the Walther P38 due to its reliability and relatively low production costs.

A controversial association of Walther’s history is its manufacturing process during World War Two. The Nazi choice of police and military gun meant that many needed to be produced and the company used the slave labour of the Neuengamme concentration camp through its own factory.

After the factory was destroyed during the Second World War, the brand was diminished to just a slim selection of patents and designs.

In 1953, Fritz Walther restarted the business in Ulm and continued the production of the P38 and renamed the model the P1 under the aim to provide weapons fit for the newly established West German Army.

In 1966, after the death of Fritz, his son Karl-Heinz re-established the brand in the new direction of sports.

During its most recent decades, Walther was acquired by another popular manufacturer, Umarex in 1993. In 2012, the company was formed as a subsidiary of the PW Group.

Why is Walther Popular?

Walther is praised due to its dependability. Recognised as one of the most accurate and reliable firearms, it is no wonder that international and Olympic champions put their faith into a Walther firearm.

Popularised in sporting and recreational use today, their extensive history in the weapons industry for police and military use speaks for itself. With Umarex seeking an association with the company during their own development in 1993, Walther's acquirement by Umarex has propelled it into popularity with airsoft enthusiasts.

Walther continues to proudly produce and market their trustworthy range of firearms and air guns, many of which can be found on our Surplus Store website.

The Most Popular Walther Products

Walther has a broad range of products from rifles to pistols which serve practical, recreational and collectable purposes.

Many of Walther’s replicas have been created by Umarex who are responsible for producing Walther CO2 replica guns such as the Walther Reign UXT PCP air rifle (renowned for being ultralight in weight) and the Walther LGU.

Some of the most popular Walther designs include:

Some of the rarest models of Walther firearms include one of Fritz’s inventions, the Model 6. It tried to recreate a 9mm Luger pistol with a blowback mechanism as opposed to a locked breech. The creation was deemed unsuccessful, and only an estimated 1,000 guns of the design were ever created. Consequently, it is now considered a collectable and highly searched for due to its rarity.

Which Walther design are you after? Why not browse our site and discover our extensive range of pistols and rifles, including the Walther PPK and the Umarex Walther CP99.