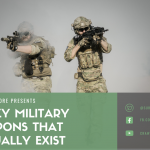 Many of our day-to-day technological breakthroughs were first invented for military purposes. Did you know that both the internet and mobile phones have origins in the military?

There is a multitude of creative designs and inventions when it comes to technology and weapons used in the military. Many weapons developed or in use by the U.S. military are so extreme they could have come out of science fiction!

We take a look at some of the most surprising military weapons which have been, will be or are currently in use. Already feeling inspired for your next airsoft game? Why not browse through our extensive selection of airsoft guns and prepare for your next match!

Developed by the U.S. Department of Defence, the Personnel Halting and Stimulation Response Rifle (PHASR) is a non-lethal weapon which was designed to stun or disorient enemies temporarily.

The PHASR works by temporarily blinding enemies with a low-intensity focused laser beam. There is allegedly no danger of blindness as the laser light in the PHASR does not inflict permanent damage to people’s eye.

The laser lights operate at alternating wavelengths which render people unable to stand or fight. It has been designed for both military and police use.

The Armatix Digital Revolver has featured in a James Bond film, and this futuristic pistol does seem to be something that Q made.

Ultimately the purpose behind the digital revolver is to provide safety for the owner of the pistol, and the authorised owner can only activate it.

A digital safety mechanism that can only be disabled if the operator is also wearing a watch that sends an unlock signal to the gun for the operator’s use.

The watch will only be active when the user unlocks it with their fingerprint, which means the gun can only be fired by the owner and cannot be used against them.

One of the biggest problems that soldiers face in combat has been seeing and firing weapons around corners. This is especially tricky in modern warfare in urban settings. However, U.S. soldiers use a weapon that can both provide vision and fire around corners.

Named the CornerShot, the weapon can be used as a semi-automatic pistol or a grenade launcher. A hinge in the centre of the weapon enables the barrel to pivot either left or right while the trigger remains stationary. A high-resolution digital camera is fixed to the weapon, controlled at the back, so soldiers can see where they are aiming.

The CornerShot has proven to be very popular, with 15 other countries now using them in their military or law enforcement. It is a prevalent choice of weapon in a Close Quarters Battle or in urban settings where surprise is required. They are also used for defence during close-range automatic firing where total cover is needed.

If you have seen Minority Report or Kick-Ass 2, you will be familiar with the “sick stick”. In a brief description, the stick essentially causes anyone to throw up when they touch it. Believe it or not, a gun with the same premise has been invented with the intent to make the receiver vomit when shot at.

Another non-lethal weapon wanted by the military, the U.S. Navy signed a contract with Invocon over a decade ago to develop a weapon that uses radiofrequency to impact a person’s hearing and equilibrium.

If targeted by the vomit gun, the victim will experience severe motion sickness and throw up immediately. It can allegedly affect people through walls and materials that are non-metallic.

The U.S. Department of Homeland Security Science and Technology Directorate has also developed a LED Incapacitator that emits a pulse of different coloured lights. The effects include dizziness, headaches and vomiting.

It is viewed as a non-lethal weapon and another demonstration of how technology is catching up with the creativity of science fiction.

Perhaps the closest we will ever get to the creation of a real-life invisibility cloak, invisible stealth technology is in its advanced stages of development by the U.S. military. The Canadian company HyperStealth have revealed information on the invention and its advantages.

Called Quantum Stealth, the technology camouflages people by bending light around the object it is hiding. Consequently, people turn invisible to the naked eye. However, it is not only limited to removing the target’s visual but can allegedly eliminate infrared light and thermal signatures. Therefore, night vision goggles will not reveal the target’s whereabouts. Shadows are also supposedly hidden too by the material. You may have seen images of Quantum Stealth online, and they are intriguing!

The endgame for Quantum Stealth technology is that it will be used by soldiers to infiltrate enemy territory without being detected, launch surprise attacks or carry out assassinations.

The Active Denial System was developed to help disperse crowds and intended to be used as a non-lethal weapon.

It transmits an invisible electromagnetic radiation beam that creates a burning sensation on people’s skin and gets them running away. It has been nicknamed the “goodbye effect” by senior military officials and a “heat ray” by scientists.

The Active Denial System works by heating up water molecules on a person’s skin to 54 degrees Celsius from up to 500 yards away. The system has been proven effective, yet has also been dubbed as a form of torture. Security experts expect it to be used soon with other crowd control methods of tear gas, water cannons and rubber bullets.

In addition, is the Tactical Assault Light Operator Suit (TALOS). Unfortunately, despite its grand plans, it has never surfaced but was hugely anticipated.

The U.S. Special Operations Command, with the help of universities and high-tech companies, aimed to develop the TALOS for soldiers to wear in combat. It was hoped to be ready for 2019 but has unfortunately never been completed.

The Idea Behind It

Essentially a robotic exoskeleton, it enables soldiers to withstand bullet fire, monitors their vitals and allows them to see in the dark.

The Pentagon dubbed TALOS the “Iron Man Suit”, and there were reports the next generation of this suit will be made from liquid metal that can solidify into an impenetrable suit on command! However, despite its grand plans and development of several prototypes, the suit was never finalised.

Which of our featured crazy military weapons are the most impressive? Why not let us know on our social media channels; we would love to hear from you! To discover more about the military, why not take a look at our top pick of military podcasts?