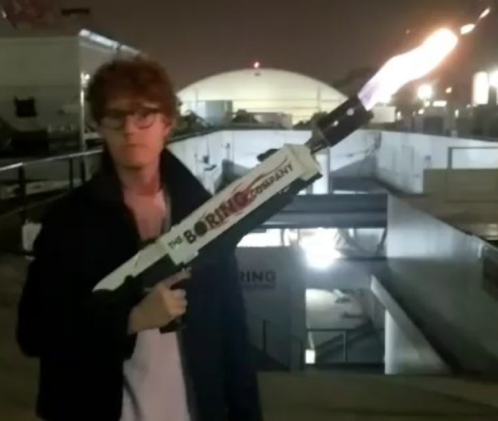 Elon Musk, the CEO of the Tesla Company, seems like a bloke who just loves his job. From trying to save the planet with his work in electric cars and batteries to trying to colonise Mars, he has his fingers in many pies.

But we didn’t expect one of those pies to be a flamethrower invention! Back in December 2017, ol’ Musky joked that after selling 50,000 Boring Company (his tunnelling start-up) hats, the company would start offering flamethrowers.

It started as a joke, but it never really died down due to Musk often referencing it in his tweets. But as revealed by someone on Instagram, it would seem that the flamethrower does exist, and it is made from none other than a modified airsoft rifle!

Not long after Musk joked that his tunnel-digging company would be selling the ‘safest flamethrower ever’, he announced that ten lucky buyers of the hats would be selected at random to tour the tunnel systems The Boring Co. are currently working on in Los Angeles and drive the company’s Boring Machine.

Musician D.A. Wallach looks as if he was one of the lucky few after recently posting a video clip of himself on his Instagram page, showing him wielding the flamethrower while touring the tunnels being dug by Musk’s company. It was noted by a commenter that the device seemed to be a modified air rifle, but instead of BBs, it spews fire. Check out the clip below (language warning, proceed with caution!):

I never know who rappers are talking about when they refer to their haters, but I still have a message for them.

But perhaps even more impressive than the airsoft rifle/flamethrower combo is the amount of work which seems to have been done already by Musk’s company. Based on the pictures and videos, it seems as if the work is already quite extensive.

The company’s first route they are working on is in Southern California, which is expected to run parallel to a section of the notorious LA 405 freeway, which has the rather prestigious title of “America’s worst freeway”. In a statement from The Boring Company’s website, it indicates that the route will work like a fast freeway where electric skates will carry people and vehicles on pods along the section of road at speeds of up to 150mph.

While we admire Musk’s work on saving the planet and reducing the amount damage currently being done, we’re not so sure if his future is in airsoft modifications and upgrades if he carried on in the same vein. However, we would quite like to imagine what a Tesla airsoft gun would be like if he wanted to take a serious punt at it. We’d guess that you’d never have a problem with your battery malfunctioning, but they’d have to have some serious upgrades performed on the internals or your AEG might burst into flames upon pulling the trigger!