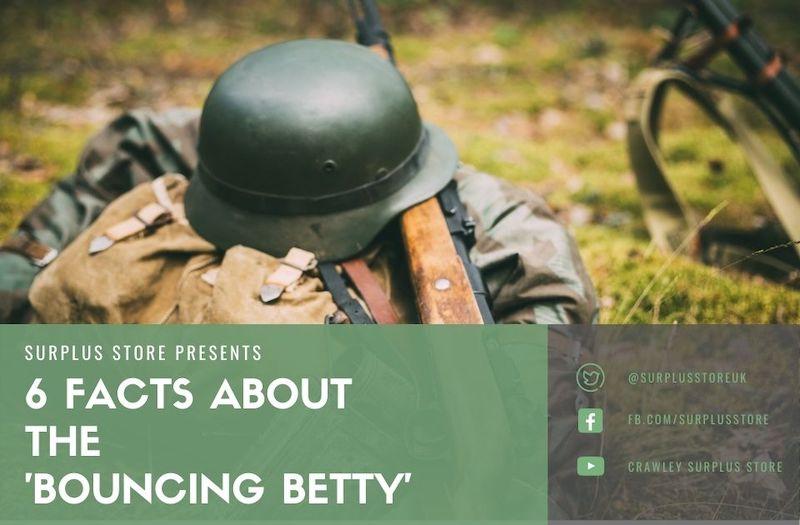 The Bouncing Betty, more formally known as the S mine, is a German military invention which sparked great fear in all opposing Allied troops.

Concealed in the ground, once triggered the mine propelled one metre into the air to detonate lethal shrapnel in a 360-degree radius.

It is unknown how many deaths the Bouncing Betty was responsible for, but it had an undeniably massive impact during World War II both physically and psychologically.

Here at Surplus Store, we are an online airsoft and survival gear store in the UK, supplying everything required for military history enthusiasts, including informative blogs! Discover our top facts about World War II’s most distinctive military weapon below!

The ‘Bouncing Betty’ is the American nickname given to the German S-mine during World War II. It was first produced in 1935 and was a fundamental weapon used for defence by the Third Reich. The mine was explicitly designed to kill and severely damage unprotected infantry in open areas.

By 1945, it is believed over 1.93 million Bouncing Betties were produced during its 10-year production and it remains as one of the most recognised weapons of World War II today.

A total of two designs were created, with little difference between the two. These were:

The First Encounter in Combat

The first documented use of the Bouncing Betty in combat occurred during the Saar Offensive between 7th and 11th September 1939. French soldiers suffered mass casualties at the hands of the S mine which caused their retreat during the battle.

After the event, French soldiers named the weapon ‘the silent soldier’.

The German military’s success when using the Bouncing Betty during this event spurred them on to unceasingly use the S mine as a form of defence of Germany and its occupied territories.

The Bouncing Betty had a terrifying hold over Allied troops and scared soldiers due to its ability to severely maim as opposed to killing those who were as unfortunate to come across one.

Vulnerable body areas, such as limbs and genitalia, were the most likely to be harmed, and understandably struck fear in many.

Once triggered, the Bouncing Betty could activate its charge anywhere between 3.9 and 4.5 seconds. How fast it activated depended on how old the mine was and its condition.

How lethal a Bouncing Betty was varied in records. The German military recorded that the mine had fatal results within a 20-metre radius, and casualties could be caused within 100 metres.

American training manual, on the other hand, recorded that the mine could cause harm within 140 metres.

In consequence of inattentive American propaganda during the Second World War, the S mine became the subject of ill-informed information.

An incorrect rumour spread that the S mine didn’t activate until the person stood on it stepped away from the trigger.

This was inaccurate information as the Bouncing Betty didn’t rely on a release of pressure to work; running away from the mine or remaining still both had equally dangerous consequences.

Upon further investigation, it was decided that the best act of survival during detonation was to drop face down to the floor as soon as possible.

Coming out of the explosion injury-free wasn’t likely this way, but it would reduce the volume of shrapnel hitting the body.

The ‘step-away activation’ myth is something that is still believed by many today, mostly due to Hollywood's preference for drama and tension!

The production of the Bouncing Betty ended after the Second World War, and it was believed that the surviving mines were destroyed after Germany’s surrender. Some may have been kept for analysis by the Allies.

Despite the claim that Bouncing Betty had a short life span of between two and seven years, there is the fear that an undiscovered S mine could still be activated now. Previous Warsaw Pact countries, North Africa, France and Germany occasionally fall victim to the activation of unfound S mines.

How do you think the invention of the Bouncing Betty impacted World War Two? Why not share your thoughts with our airsoft community on our social media channels?