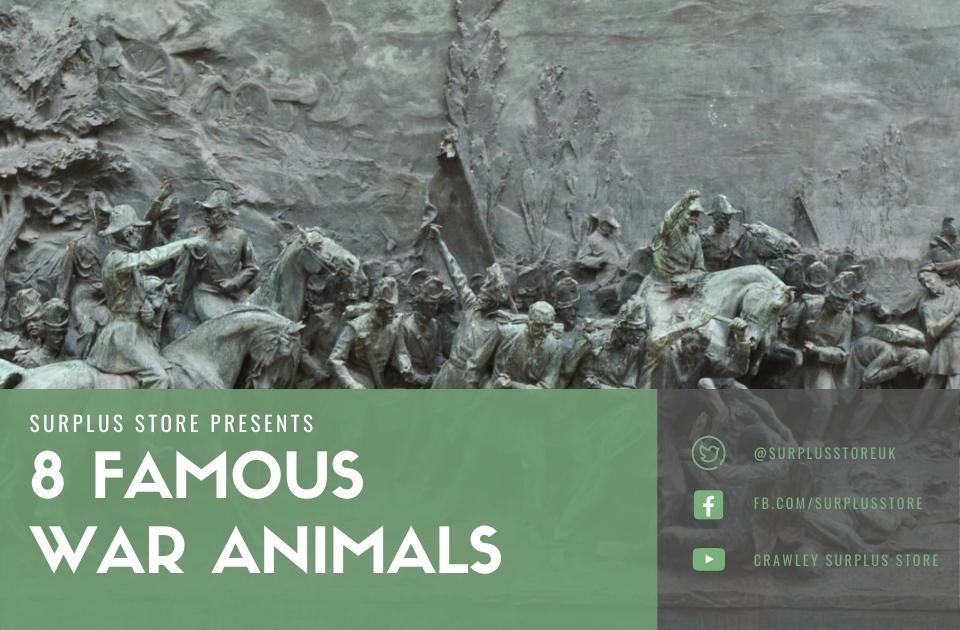 When it comes to warfare, forces need to use everything in their environment to their advantage - that includes the animal kingdom.

Here at Surplus Store, we love to look back at how warfare has transformed over hundreds of years. We also have a range of air pistols for sale across the UK, alongside various other supplies for those that enjoy more recreational combat.

With almost impossible variety, animals could be used for nearly every task on and off the battlefield. Here, we look at some of the most famous animals in combat, alongside some less likely candidates over the years.

Arguably the most famous war animals, at least in British history, are horses. Strong, fast and capable across multiple terrains - in the era before tanks and artillery, horses were a hugely influential asset.

As fighting and technology developed, the horse took on more of a supporting role in warfare. However, their value never waned. At the start of WWI, the British Army had 25,000 horses and purchased more than 115,000 more during the conflict.

Their service was immortalised in the Steven Speilberg film War Horse, which was nominated for Best Picture at the 2011 Oscars.

Out of all the animals used in warfare, few have had more varied roles than the dog. The first use of canines in conflict dates back to 600BC, and they still play an essential role today, over 2,000 years later.

The most common role of dogs has always been as patrols, but they were also given armour and used as attack weapons in some ancient conflicts. Nowadays, they are often used to send messages, provide moral support to troops and sniff out threats.

In ancient warfare, there would have been few more terrifying sights than the colossal war elephant. These giant animals, sometimes 60 years old, offered so many advantages in the pre-artillery era.

Elephants as tools of war first appeared around India and Asia. During this time, they were often equipped with armour and charged at strongholds to break down defences. Some were mounted by soldiers wielding long pikes, while others were even attached with curved swords on their tusks.

By the time elephants reached Europe, the wide use of fire weapons had made them a lot less effective in combat. During WWI, forces used them to move heavy equipment, even here in the UK.

When it came to desert warfare, particularly in the Middle East, camels were of huge importance. While they didn’t have horses’ speed, they were incredibly hardy, capable of surviving much longer in arid landscapes than their counterparts.

As with many animals, camels were of particular importance in the pre-artillery era before being largely superseded. However, on uneven desert landscapes that often lack roads and feature large distances between locations, camels are still an essential mode of transport. Many small African countries still use camels in their military, while India still employs camel-mounted soldiers to patrol their desert border with Pakistan.

The list of animals used in warfare is almost endless! While some were proven successes, other operations had less long-term use.

Animals were a vital part of warfare, and many countries continue to salute their sacrifice as they would other fallen soldiers.

If you want to discover more about famous military conflicts, be sure to check out the rest of our blog here at Surplus Store!