Our How-To Guide for Becoming an Airsoft Sniper

An airsoft sniper is probably one of the most coveted roles in the world of airsoft. There seems to be a certain air of mystery surrounding these individuals when they are spotted (or not if they’re good!) at skirmishes.

Instead of the usual run-and-gun that is associated with the players packing airsoft rifles, an airsoft sniper is more methodical, picking their shots and hoping to remain blended into the environment.

The rise of the sniper has no doubt been influenced by the YouTube compilations, as well as factors outside of the sport like video games and Hollywood films. All of these influences have helped to elevate the sniper to almost mythical proportions.

But an airsoft sniper is more than just aiming and shooting from in the bushes in the hope of getting that glory shot for the compilation video. Snipers have other roles and are useful for recon, gathering intelligence, providing warnings of approaching enemies and removing high-value targets. In the right scenario and environment, a well-established sniper can help to turn the tide of the battle.

With this in mind, we have looked at a few points that you should be aware of if you are looking to take the leap into a sniping role. But before we start, it is important to stress that becoming a good airsoft sniper requires a lot of patience, practise and perseverance. If you are willing to put in the time, you will see the results:

Choosing your Airsoft Sniper Rifle & Learning to Shoot it

It is important to do your research and establish out what style of rifle will be your best fit. You should also consider the price of the rifle you are looking at; spending big on a sniper rifle will not automatically turn you into the best in the game but skimping on the price will not do you any favours either.

Are you going to go with the more traditional bolt action version or do you favour semi-automatic? Will you be using gas, electric or spring? Standard set up bullpup? These are just some of the questions you should be asking yourself! Oh, and as tempting as it may be, don’t just pick a sniper because it looks cool! 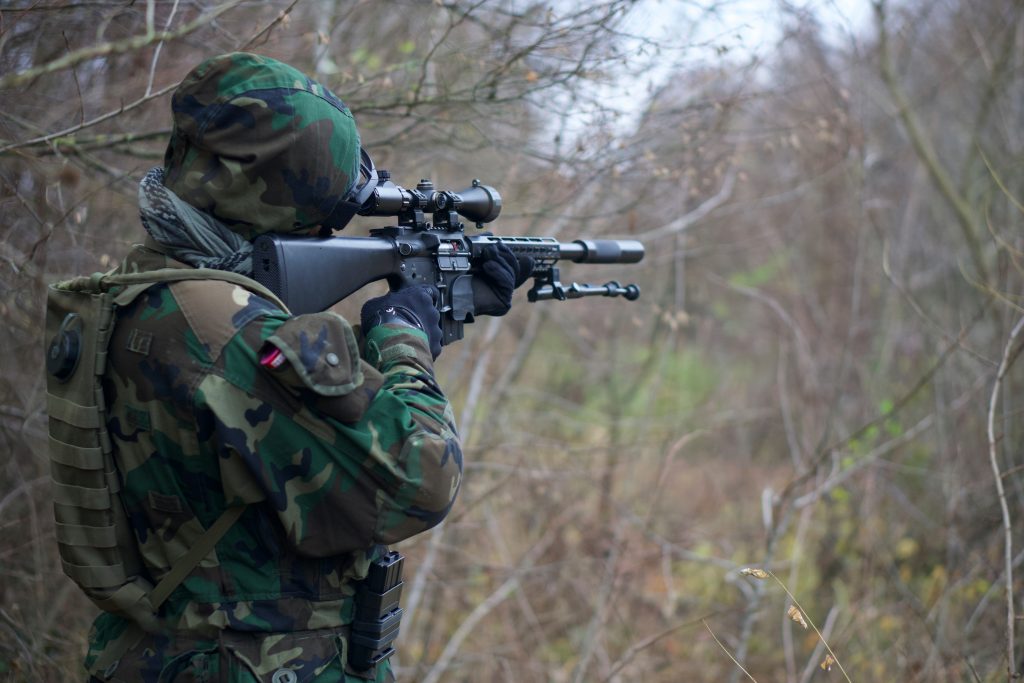 It is also worth considering the maintenance and upgrade capabilities of your rifle. For example, gas-powered snipers offer quite an authentic feel to them thanks to the recoil, but the cost of gas can add up over time. Gas is also affected by weather conditions, so this should be taken into account. On the other hand, the bolt action guns are usually spring powered which means they are often cheaper to upgrade and maintain, but the parts can wear out more quickly. Another factor to consider is that semi-automatic sniper rifles generally have a lower power limit and more moving parts than bolt action rifles. This means though you can rattle off more shots quicker with a semi-auto, but the bolt action should be more accurate, and the BBs will get there quicker.

But with great FPS comes great responsibility! At almost all sites snipers have a minimum engagement distance (meaning you cannot shoot at anyone closer than say 30 metres, but they’ll tell you on the day!) which leads to the need for a secondary lower powered weapon, but more on that later!

One of the first upgrades that snipers might make is the fitting of a precision inner barrel. These are tight-bore barrels which help to keep shots a bit closer in grouping but will also require cleaning before every event as even the slightest bit of debris could greatly impact its effectiveness. Quality over tightness is key; a quality barrel with a good internal bore will give you better results than a tighter but lower quality barrel! The primary thing is to make sure you have a good quality hop system as this is where the heart of the range comes from. But to be honest, upgrading your sniper rifle could be a whole article in itself and varies wildly depending on what rifle you start with!

When it’s time to upgrade or maintain your sniper rifle, we’ve got a lot of the kit you will need in our section here, but if you are unsure of how to do it yourself, please get in contact with us. Attempting an upgrade and getting it wrong could result in you voiding the warranty on your gun, leaving you potentially empty handed!

When it comes to actually shooting the rifle, we always say that practice makes perfect. Practice hitting targets from varying distances to get a feel for your weapon. Try and practice in different conditions as well to see how they affect your aim, BB sway, drop off, etc. Wind and foliage will have a significant impact on your longer shots, so it is always worth keeping that in the back of your mind. Also keep in mind that BB weight a quality plays a huge factor. Some setups just plain don’t like specific brands and weights, and not all brands and weight are created equal; even across the same brand! Experiment with as many different weights and brands as you can get your hands on - Longbows, Geoffs, the newest Nuprol BBs are all worthy of your time!

As well as making the correct choice for your primary weapon, you need to ensure you have a reliable secondary weapon, and maybe even a tertiary one if you can fit it into your loadout.

You should at least have a semi-automatic pistol as a backup, but it is not unusual to see snipers with a small SMG as a secondary and then a pistol tucked away somewhere for when things really get hairy! The KWA/ASG MP9 is a great one for this and sounds scary as hell up close!

As one of the primary objectives of an airsoft sniper is to remain hidden, the outfit choice you make is very important. Ghillie suits are the most obvious form of camo for a sniper and come in a variety of colours depending on what location/season you need them for.

A ghillie suit helps to mask the shape of the wearer while allowing them to blend in more easily to the background. Many snipers will also attach some foliage to their weapon and suit to help them further adapt to their surroundings. If a ghillie suit isn’t your thing, you should at least tailor your camo to the surroundings and the seasons to ensure you blend in as much as possible.

But regardless of what you wear, you need to be able to move freely in it. You will also have to try and find the balance between speed and remaining undetected in your movements. Move too fast, and you will be spotted but move too slowly, and you won’t be of use to anyone. Stay low, move slowly but with intent and stay as hidden as you possibly can to maximise your effectiveness.

Learning How to Move in Your Gear

As we touched upon above, you need to learn how to move effectively as a sniper, and this is certainly more apparent if you are stacked up with lots of gear and a ghillie suit. One of the best ways to move effectively is to use nature to your advantage. If the wind is blowing the trees and foliage in one way, follow its general direction, but only if it necessary to move.

Snipers can often remain in the same position for close to an hour at a time, maybe even longer (although urban snipers may move around more frequently). Staying still for this length of time can be tiring in itself, so it is important to practice in your full gear, so you get used to the sensation. Practice moving in prone while wearing your loadout to get used to moving quietly and undetected.

But while this is all well and good, what happens if you are spotted and need to retreat quickly? Learning how to sprint and escape from situations effectively is certainly an invaluable skill that will be beneficial for you to learn. Practice getting from prone to standing as fast as possible and then retreat to a safer location.

Being observant and aware of your surroundings at all times are things that are vital for an airsoft sniper. One of the tasks that can fall to a sniper is to survey targets and prioritise fire. Many who are new to sniping will spot an enemy patrol and try and take fire as quickly as they can. This more often than not leads to them missing most of their shots and resulting in them being taken out or forcing them to retreat and relocate.

Learning when you should take your shot and who you should aim at (shot priority) is key for an effective sniper. For example, if you target and take out the leader, the rest of the patrol may split up and retreat. If this isn’t exactly how it works, it will at least cause them to panic for a moment giving you the chance to get in another shot or move away before you are spotted.

But as important as it is to know when to take your shot, it is just as important to know when NOT to shoot. You may have a chance to eliminate one member of the opposing team, but you get eliminated as well. Both teams have lost a member, so you don’t really win in this scenario. Instead, perhaps you can communicate with other members of your team – who are in a better position than you - and alert them to the enemy patrol. You could even sit back and relay the OpFor positions to the rest of your team. Being in an out of range enhanced position with a scope can give the rest of your team a huge tactical advantage if they know where the attack is coming from, turning a possible ambush on its head; although always watch your own back too! 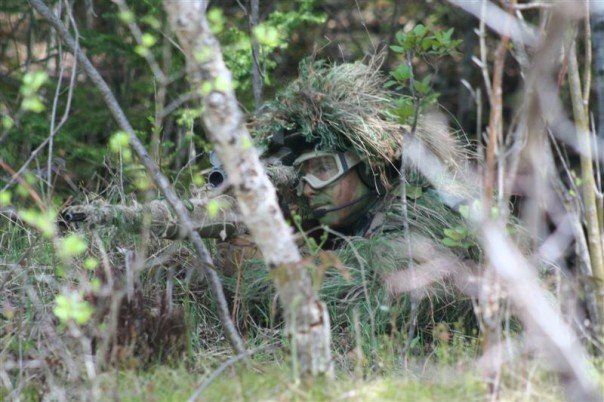 Reconnaissance can also fall under the observation banner. If you are allowed to recon the playing field before everything starts, you should be making mental notes of areas of good cover, potential ambush spots, where you can fall back to if you are compromised and so on. If you can do further research on the area before the actual day, then all the better. Of course, there is a limited amount you can learn from Google Maps, but it can help to paint a better picture. If you have to go into the game blind, it is important that you pick up on your spots as you move, which is an invaluable skill you will learn over time.

We’ve mentioned it before in this article and in many of our previous pieces, practice makes perfect. The more you put into your training, the more you will get out of it during skirmishes. Practice your long shots, work on your physical conditioning, learn how to move in your kit and don’t get complacent. These are the key areas to becoming an effective airsoft sniper.

Are there any further key tips you would give for becoming a proficient marksman? Let us know in the comments below or on our social media channels!