How Military Camouflage Has Evolved Over Time: Part One 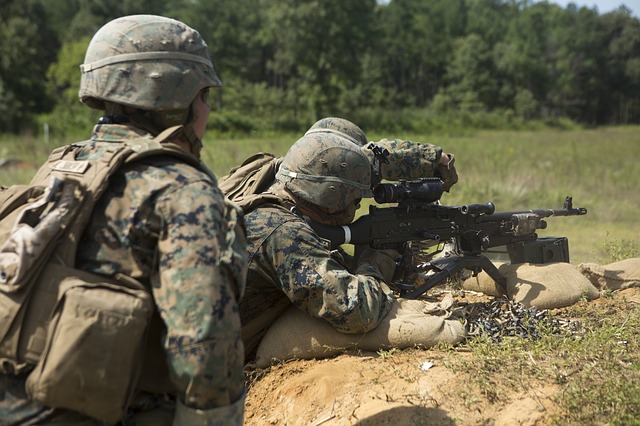 Military camouflage clothing has evolved a lot over the years, from variations that are designed to make you blend in with the natural environment to those that were intended to distract. With this in mind, this is the first of two parts looking at how military camouflage has evolved throughout history:

When warfare consisted of two armies charging at each other across a field with swords drawn, blending into the surroundings wasn’t high on the list of priorities. But once guns and bullets became more prominent, colours that allowed you to blend in were selected over showy uniforms with gold trim.

As early as the 1800s, militaries around the world donned uniforms of solid colours, particularly browns and greens. The shading may have allowed the soldiers to blend in, to a certain degree, but they didn’t do anything to conceal the shape of the human body, which came at a later date. 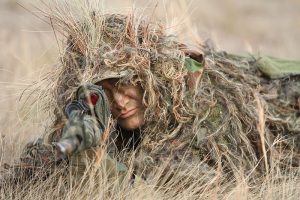 The ghillie suit was first developed by gamekeepers in Scotland for use as a portable hunting blind and took the camouflage element beyond the standard uniform. Lovat Scouts, a Scottish Highland regiment formed by the British Army during the Second Boer War (1899 – 1902), is the first known military unit to use the ghillie suit in active duty.

In 1916, Lovat Scouts went on to become the British Army’s first sniper unit, with their newly-created suits coming in very handy. The term “ghillie” is derived from Ghillie Dhu, a solitary male faerie who wore leaves and moss. It is also derived from gille, the Scottish Gaelic word for “lad” or “servant”. In English, this is especially used to refer to those helping with deer hunting and stalking, or fly-fishing trips in the Scottish Highlands.

Apparently, there’s an old saying that goes, ‘a well-made Ghillie suit means you'll step on a sniper before you see him’, so why not test it yourself by picking one up from our website here.

The first major use of camo in a large-scale war came during World War I when France became the first army to use it in battle. However, at this time, it was mainly used to hide equipment in the field, although snipers would occasionally wear it.

The first patterned camo was created for the French by artists, but other nations quickly adopted some of the techniques. The British were one of the first to do so, with the German army adding camo to its helmets soon after, making it an official part of the uniform in 1918. The German army used thick black lines to separate the coloured patterns, which changed based on the season they were needed for. 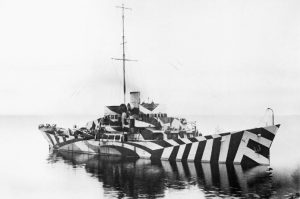 Dazzle or Razzle Dazzle Camo (as it’s known in the U.S.) took a bit of a different direction than traditional camouflages. Unlike other forms of camouflage, the intention of the ol’ razzle dazzle was not to conceal the vessel, but to make it difficult to estimate a target's range, speed and heading.

Geometric shapes in contrasting colours were painted on the sides of ships in a bold strategy which supposedly made the ship appear to move at differing speeds and different depths than reality, but it didn’t seem to work out that way…

There were so many factors involved in trying to create an effective camouflage – like best shapes to use or colour schemes - that the evidence for their success was mixed at best. 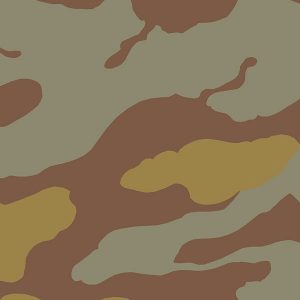 It took until 1929 for camo to become mass-produced, with the Italians becoming the first nation to do so. They created the M1929 telo mimetico (mimic cloth) pattern, which combined large shades of chocolate-brown and grey-tinted green.

The camo was most commonly used as an additional covering to the base layers worn by the Italians, and also became popular for paratroopers. It didn’t take long for other armies to copy the design and add other colours.

1942 was the first example of large-scale American use of camouflage when General Douglas MacArthur ordered 150,000 uniforms with the pattern which became known as frogskin. The pattern was created by a civilian horticulturist called Norvell Gillespie, who used five colours in his reversible design, which was dominated by dark brown and green on one side for use in the jungle and a three-colour, tan-heavy version appearing on the other.

The frogskin uniform was mainly worn by the Americans in the Pacific Theatre during World War II. In the European Theatre, they decided to stick with olive and khaki due to the fact the Germans wore camo.

With more and more nations adopting camouflage, new patterns began springing up over the years. Flecktarn, which uses dots or splotches as a way to soften the edges between the different colours, and to remove the shapes that might stand out as artificial, came out of Germany in the 1970s.

1981 saw the U.S. Army enlarging an earlier design from the Engineer Research and Development Laboratories to create their own version of woodland camo. It used irregular splashes of colour alongside the contrasting greens and browns, which offer a variety of visual cues that help with concealment.

But before the Americans had their version, the British Army had already dabbled in woodland camo in the form of DPM, or Disruptive Pattern Material. The British Ministry of Defence coined the term for its range of camouflage patterns which were first issued during the late 1960s.

The “standard” DPM pattern was designed and developed for temperature climates, and consists of brown, black and bright green shapes on a tan or khaki background, but many countries having their own variations of the standard woodland and desert patterns with colourways running from red and orange to blue and purple. 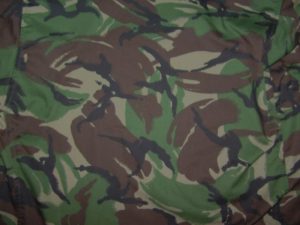 Some version of DPM remains in use with the British Army and numerous other countries, including Bulgaria, New Zealand and Portugal. Many more have worn the pattern at one time or another, either due to their connection with the United Kingdom or because of the universal effectiveness of the pattern. However, it will gradually be replaced by the new MTP (Multi-Terrain Pattern) in the British Army, which we will discuss further in part two of this feature.

The next big development came with the Gulf War, as a desert theatre required a whole new approach. A three-colour desert design with a sand-coloured background with beige and earth brown waves was created, and the U.S. and other countries quickly adopted the design in the 1990s.

It isn’t just uniforms that have benefited from camouflage designs, with many guns also taking on the mismatching colours for concealment. For example, the Air Arms S510 Ultimate Sporter PCP Air Rifle use of different grains of wood helps to conceal it in a forest or hunting environment.

This is just a brief look at the history of camouflage; be sure to check out the second part of our feature here, which specifically looks at the more modern variants of camo.