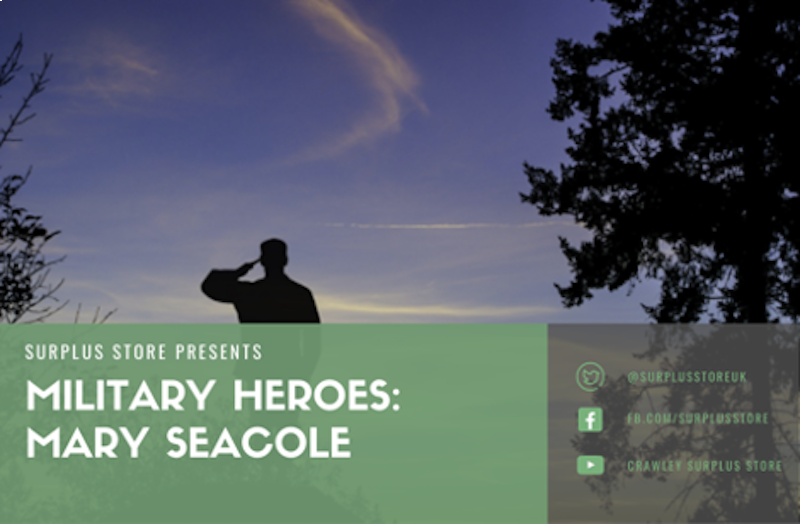 The world of military history is populated by some interesting figures. Some are remembered faithfully as heroes while too many are tragically forgotten to the sands of time.

Our series aims to shed light on historical wartime heroes that are known for their courage, bravery and humanity.

If you’re looking to expand your collection of airsoft accessories as well as your knowledge of military history, why not check out our wide range here at Surplus Store?

Who Was Mary Seacole?

Mary Seacole nee Grant lived from between 1805-1881 and became known as a pioneer in the nursing field during the Crimean War.

She was born in Kingston, Jamaica to a Scottish father and a mother of African heritage. It was her mother who taught her the nursing skills that would later give her fame and notoriety.

Many Jamaican women who practised medicine would practise within the Creole or Afro-Caribbean tradition. Mary’s mother was known as a ‘doctress’, something Mary herself would later be established as. Her mother ran a lodging house that often tended to Jamaican soldiers which created many opportunities that Mary was eager to learn from.

Before her work in Crimea, Mary also travelled to treat cholera sufferers in the 1850 pandemic and cared for victims of yellow fever in 1853.

The Crimean War took place between October 1853 and February 1856. The conflict’s name comes from its main battleground, which was the Crimean Peninsula, located between the Black Sea and the Sea of Azov.

The conflict was between the Russians and an alliance comprised of the British, French and Ottoman Turkish. The war arose because of several factors and disputes between the opposing countries, mainly catalysed by the Russian Orthodox interference.

On October 4th the Turkish declared war on Russia. This was the beginning of a poorly managed campaign on both sides. Disease was rife, and many died because of the terrible conditions for the wounded.

Mary Seacole and The War

In September of 1854, Mary Seacole arrived in England to offer her help to soldiers injured in the Crimean fighting. The British War Office refused to send her.

Determined to help improve the poor medical conditions, Mary funded her own trip in 1855 and established a hotel for injured soldiers.

The hotel was established in partnership with Mary’s business partner and family friend, Thomas Day. They set up shop just outside of Balaclava, which was much closer to the action than Florence Nightingale’s famous hospital in Scutari!

As well as nursing the injured at her hotel, Mary also rode directly out onto the battlefield to deliver medical provisions and nurse the seriously wounded. It was reported that, on occasions, she would come to the aid of soldiers even when under fire.

The troops effected by the deplorable conditions of the war affectionally called Mary ‘Mother Seacole’ because of her compassionate nursing and caring demeanour.

Before she made her way to Crimea, Mary travelled extensively. She was incredibly independent and travelled alone, despite this being very unusual in the nineteenth-century. Her book titled the ‘Wonderful Adventures of Mrs Seacole in Many Lands’ became the first autobiography by a free black woman in the British Empire.

Despite having a similar influence in the Crimean War, Florence Nightingale was remembered more fervently. Notwithstanding her historic efforts, Mary seemed to fade away into obscurity after her death in 1881; it was only in the 1980s that her story was rediscovered and she began to reach the same kinds of heights as Florence Nightingale.

In 2016 a statue of Mary Seacole was built outside of St Thomas’ Hospital. Shockingly, it is believed to be the first statue in the UK to honour a named black woman.

As an impressive woman who overcame the prejudices against her for being both a woman and of mixed-race, she continues to inspire many to this day!

Which military hero should we cover next? Share your ideas with us on our social media channels!