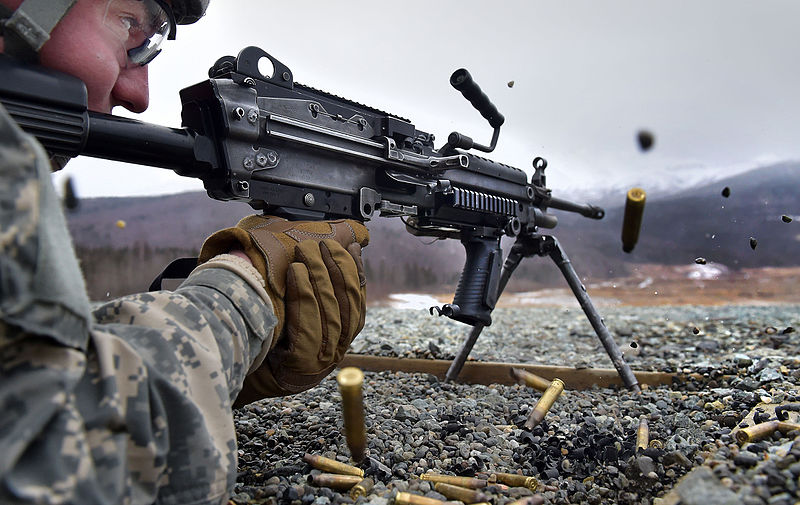 You know the saying “sometimes the old ways are the best”? Well, it seems that is exactly the thinking behind the recent announcement that the Cold War-era M249 Squad Automatic Weapon could well remain in army circulation for years to come.

While they are looking into fielding the Next Generation Squad Automatic Rifle (NGSAR) as early as 2022, the M249 is doing a currently doing a great job, and it has been hinted that it won’t be completely phased out when the NGSAR is rolled out.

One of our recent blogs looked at how important support gunners can be – albeit with airsoft guns – but the same principles can be applied to the Army. A soldier is only so good as the firearm in his hands, which is why the upgrade is being looked into. (You can read that article here.)

Army officials have recently awarded contracts to five companies to produce prototypes of the NGSAR. While there aren’t too many details on what the NGSAR will be like, basic specifications have stated that it will have to be five pounds lighter than the current M249 and fire ammo that is lighter and more effective than the current 5.56mm rounds.

But Lt. Gen. Paul Ostrowski, the principal military deputy to the Assistant Secretary of the Army for Acquisition, Logistics and Technology, has stated that the new system is “not for every soldier”, and they are looking at it for 100,000 close-combat soldiers. The NGSAR is currently quite high up on the agenda and is on target to be ready for initial field tests beginning in late 2022/early 2023.

But one of the biggest challenges that manufacturers are currently facing is to provide ammo that is 20% lighter than brass-cased rounds but more effective than the M855A1 5.56mm Enhanced Performance Round. It was highlighted last year (2017), that the 5.56mm is not going to be around forever and that its penetrative capabilities have suffered somewhat due to the advancements in armour.

This has led to research into creating a new cartridge that uses a lighter material than brass for the casing. For example, defence company Textron has been working for over a decade on machine guns that can fire polymer case-telescoped ammo as part of its Lightweight Small Arms Technology program. But other companies have found that a standard cartridge design made completely from polymer has not been strong enough and leaves the cartridges more prone to damage upon firing. This has led to both polymer and brass being used, but with much less of the latter material involved.

But rather than dictating how companies should design their new cartridges, Ostrowski has stated that they are letting the companies make the decisions:

Once the prototypes have been delivered to the Army – scheduled to be as early as summer 2019 – officials will evaluate the designs, refine the requirements needed for the new weapon, and then decide on which company will produce the NGSAR.

But Ostrowski has stated that “our 5.56mm is going to be in our inventory for a long time”, basically confirming that if it ain’t broke, don’t fix it!

What do you think about the new decision to keep the M249 Squad Automatic Weapon in circulation? Let us know your thoughts in the comments below or let us know on our social media channels!