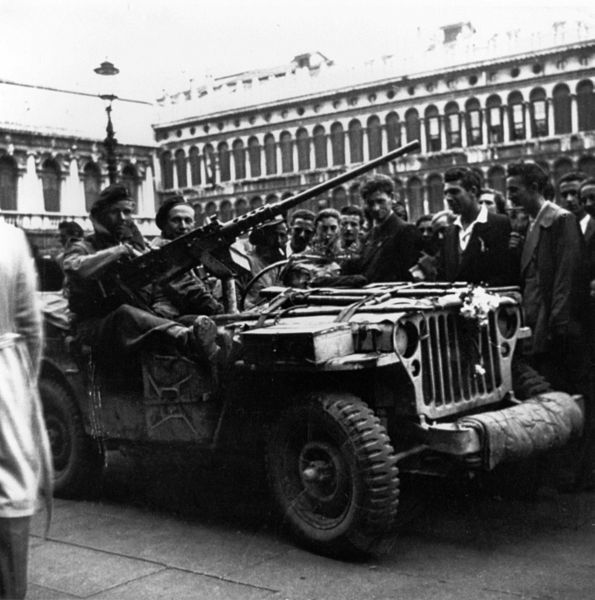 Following on from part one of the story of Popski’s Private Army – which you can read here - we bring you the second part below:

Shortly after the forming of Popski’s Private Army, events started to proceed very quickly indeed. The German and Italian forces were removed from Egypt and Libya shortly after PPA’s formation which led to focus being on breaking Erwin Rommel’s defence at the Mareth Line.

A joint operation between PPA and the Long Range Desert Group found a gap in the mountains which allowed Bernard Montgomery and his forces to launch an outflanking attack on Rommel’s forces, which led to the re-capturing of the line and the retreat of the Axis forces. PPA was also one of the first sections of Eighth Army to meet up with the British First Army and American II Corps in Tunisia during early 1943. Many reconnaissance and raiding operations were carried out in conjunction with these forces and happened around the same time of the battle of Kasserine Pass (February 1943), including the capturing of 600 Italian soldiers who surrendered.

PPA spent the summer of 1943 in Tunisia and Algeria recruiting and training new volunteers from the Commandos, SAS, Royal Armoured Corps and the LRDG. Upon finishing their recruitment drive, it brought the unit’s size up to around 35 all ranks, made up of two fighting patrols and a small HQ. For a short time, the PPA experimented with using 1st Airborne Division’s gliders to deliver men and their vehicles behind Axis lines in Sicily, but this was called off at the last minute, and they were sent in by sea instead.

In September 1943, a patrol from PPA containing Popski, five jeeps and a handful of soldiers sailed to Taranto, Southern Italy, on the USS Boise to head inland.

Two days before this, Italy had signed an armistice with the Allies. Although the landing was unopposed, the situation was very confused: the Germans considered the Italians to be traitors and went about occupying more Italian territory. 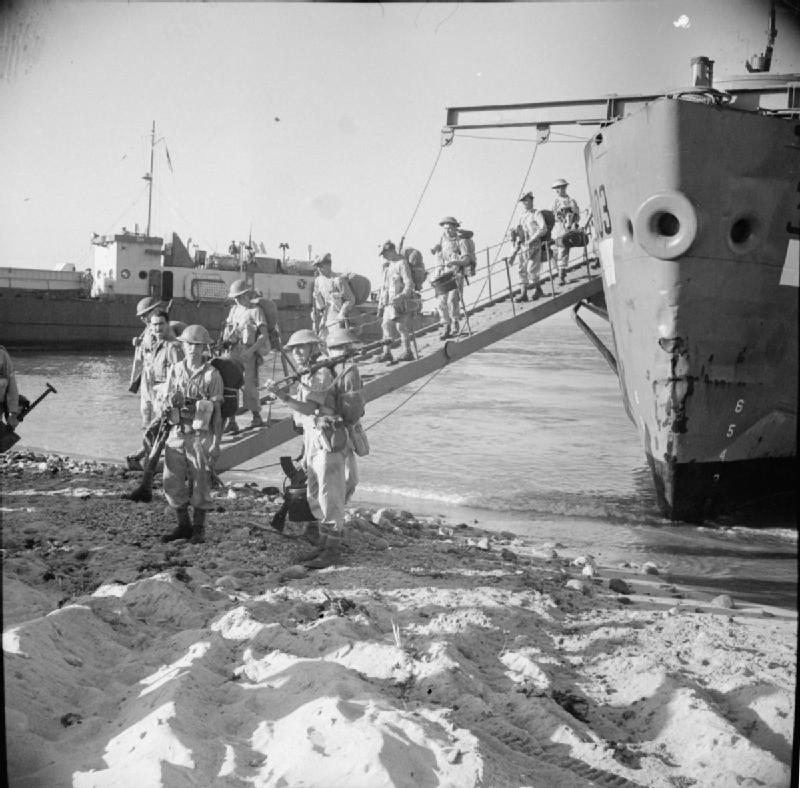 With the German forces attempting to take control of more sections of Italy, information was urgently needed. While the 1st Airborne set up a defence perimeter, Popski took his jeeps off to do some digging and identify some potential landing grounds for the Royal Air Force between Taranto and Brindisi. He returned after about 30 hours in the field to report that the Italian forces were friendly but refused to take up arms against their former German comrades. However, they stated they would not halter the progress of the Allies.

He also had all the information the RAF needed, courtesy of Italian Air Force officers. Unfortunately, he had not seen any Germans on his patrol so could not report back on any intelligence on them.

During this time, Popski was allowed to increase the size of his unit to 80 all ranks, but around 100 men were deployed at any one time during the Italian Campaign.

Three fighting patrols, each containing 18 men in six jeeps, and one Tactical HQ patrol of four jeeps were formed. Each jeep had .50cal and .30cal machine guns, which offered substantial firepower for their size. Each man trained hard in a number of operation areas, including demolition and counter-demolition, reconnaissance and intelligence gathering, and amphibious, mountain and parachute operations, which enabled them to be prepared for every eventuality.

The soldiers were deployed in many roles, often covert, and even operated as front-line troops. One such example included a number of PPA troops holding a sector of the Allied front line after it was badly depleted following the withdrawal of forces for the D-Day landings in Normandy. They would drive around in their jeeps as a tactic to trick the Germans into thinking they were up against much larger units.

During the winter conflict of 1944 and 1945, PPA fought alongside British, Indian, Polish and Canadian infantry, commando and armoured units. They scouted and located targets for the Allied Air Force, captured many guns and prisoners, saved bridges, chased German forces out of key areas and accepted the surrender of the entire German garrison located at Chioggia.

Throughout the rest of the war, PPA worked alongside other secret units such as the No. 1 Special Force (SOE), ‘A’ Force, Phantom, SAS and Office of Strategic Services. They even took strays under their wing on the way, including German, Italian and Russian POWs. 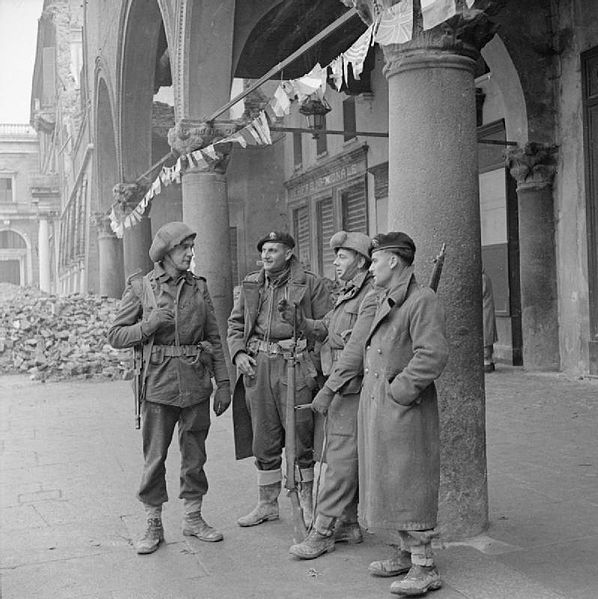 Members of the 27th Lancers

In early December 1944, PPA was among the first to enter Ravenna. Popski, upon hearing that two troops of the 27th Lancers were surrounded by Germans and needed aid, led a patrol to support of those under fire. Helped by the covering fire of some nearby tanks, he led the patrol to within 30 yards of two companies of German troops who were dug into the bank of a canal.

PPA’s jeeps kept up fire on the German position, which allowed the Lancers to escape unscathed. Popski, however, was not so lucky… He lost his left hand to a German rifle grenade, leading to him being hospitalised and sent to England where he was awarded a Distinguished Service Order.

In his absence, Jean Caneria assumed command of PPA and took them on operations until the jeeps could travel no further in the snow. When this happened, he organised training for everyone in skiing, mountain climbing and parachuting.

Caneria came across a large force of Germans at Chioggia accompanied by only nine men in three jeeps. Channelling his inner Popski, he bluffed the German commander stating that he had a much larger force behind him. The commander surrendered along with his 700 men.

Two days later, a PPA patrol charged a cluster of 88mm guns and captured it together with 300 troops. Two further patrols sailed across the Gulf of Venice, helping to clear the Germans out of Iesolo. In 10 days, they had taken 1,335 prisoners, captured 16 field guns and a haul of smaller arms. This would prove to be the final battle for Popski’s Private Army. 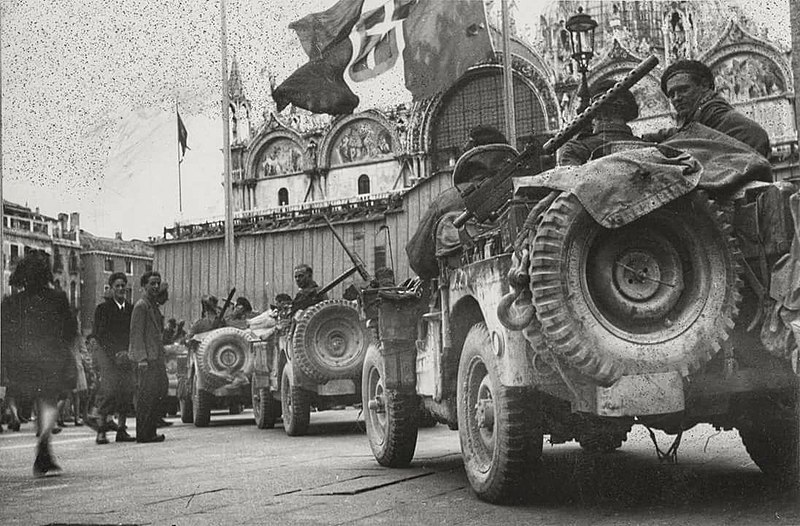 Popski returned to his loyal band of men at Chioggia, where he had a hook in place of his left hand. Continuing to lead his fleet of jeeps, he sailed them to Venice where he would lead them around St. Mark's Square, making them the only wheeled vehicles ever to have been there! He then led his troops up into the Alps, heading towards Austria. When they reached the border town of Tarvisio, he received a radio message stating that the Germans had surrendered.

After disarming Italian partisans, discouraging Josip Broz Tito’s followers from invading Austrian and Italian territory and hunting for Heinrich Himmler, PPA was disbanded on the 14th September 1945. By this time, personnel in the PPA had earned between them a Distinguished Service Order, six Military Crosses, ten Military Medals and 14 Mentions in Despatches. King George VI had even personally requested an account of the unit’s exploits.

Popski was promoted to lieutenant-colonel and became the British-Russian liaison office located in Vienna. He was later demobilised, naturalised and went on to achieve fame in Britain as a writer and broadcaster until his death in 1951. He was buried in Wixoe, Suffolk, meaning his final resting place was in the country that he went to extraordinary lengths to protect.

Thus concludes the story of Vladimir Peniakoff and his band of loyal soldiers-turned-brothers; what do you think of the tale? Be sure to let us know your thoughts on our social media channels!

In the meantime, you can also browse our extensive selection of airsoft pistols, rifles, gear and much more on our website, or come and visit us in our store!