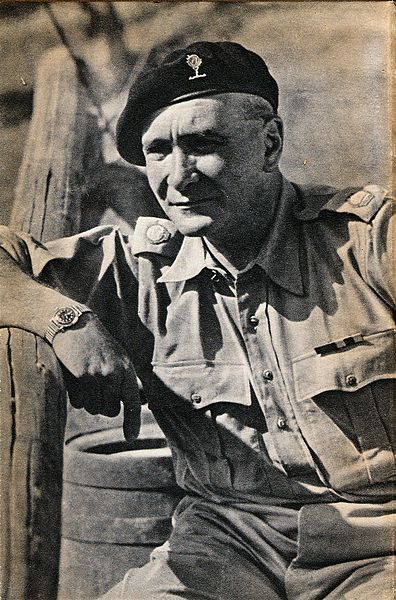 After we’d finished our piece on the near-invincible characters from history (which you can read here if you missed it the first time around), Tech Dan noted that it reminded him of the story his old man had told him about Popski’s Private Army.

The name rang some bells, so we decided to delve deeper into the story of Vladimir Peniakoff and the role he played in World War II for the British Army. Now, with a name like Vladimir and us talking about the British Army, you might be a tad confused, so read on as we have outlined his incredible tale below, and let us tell you, he is indeed a guy you’d want on your side at a skirmish... He may not be so handy with the airsoft guns, but his leadership and ability to rally the troops is second to none. Read his story below:

Peniakoff was born in Belgium to Russian-Jewish parents in 1897. After being educated in Belgium, he moved to England to study at St John’s College in Cambridge, where he quickly fell in love with the country. However, following the outbreak of World War I he returned to France and signed up as a gunner with the French Army. However, he was forced to leave the Army in 1918 after spending 12 months in the hospital.

Following the War, he qualified as an engineer, worked in his father’s chemical factory in 1924, then moved to Egypt to run a sugar refinery. Peniakoff found that he had a lot of spare time, so did what every man of his age does… climbed the Italian Alps and learnt how to fly light aircrafts around the Middle East, of course!

Not satisfied just yet, Peniakoff explored the Eastern and Western Deserts off his own merit using his own resources, learning desert navigation along the way. And if that wasn’t enough, he became a Fellow of the Royal Geographical Society, got married and had two daughters.

At the beginning of the Second World War, Peniakoff was 42 years old, and despite being invalided out during the First World War, he applied to serve in the Royal Air Force and Royal Navy, keen to defend the nation that had captured his heart.

However, he was rejected from both of these but was eventually accepted by the British Army and assigned to garrison duties where he filled the role of an Arabic-speaking junior officer in the Libyan Arab Force.

But this was not good enough for Peniakoff, who left his post and formed the Libyan Arab Force Commando (LAFC), comprised of a group of British and Libyan soldiers who operated behind enemy lines.

Upon returning to Cairo in mid-1942, Peniakoff was asked to join a Long Range Desert Group (LRDG) raid in the area he had just left. This offered him the chance to learn a lot about the procedures of reconnaissance and raiding unit but would ultimately cost him his little finger, which was blown off by an Italian bullet.

He was awarded the Military Cross for his previous intelligence reporting and raids while leading the LAFC behind enemy lines, and for the operation with the LRDG, which included setting 24 planes on fire, damaging another 12 with bombs and machine-gun fire, and destroying ten trucks and a fuel tanker & trailer… Not bad, eh!

The LAFC was disbanded shortly after Peniakoff was awarded the Military Cross, which led to the formation of the No.1 Demolition Squadron; the smallest independent unit of the British Army. It was initially formed to attack fuel supplies in support of General Montogomery’s offensive at El Alamein and was the brainchild of Lieutenant-Colonel John Hackett.

The founding members and original officers of the unit were three friends who had served together in the Libyan Arab Force; Jean Caneri, Robert Park Yunnie and Peniakoff himself. The unit became operational on 10 December 1942 as an 8th Army Special Forces unit.

But how did the famous name come to be? Initially, Peniakoff was asked to give the unit a name, but he was said to be quite indecisive with the choices and couldn’t pick one. Eventually, Hackett grew frustrated at his faltering and stated: “You had better find a name quick or we shall call you Popski’s Private Army” and the rest, as they say, is history.

The unit was quite unlike any other and was run on a very informal basis. There was no drills or saluting, every man messed in together, every man was expected to know what he was meant to do and get on with it, and there was only one punishment for any failure; to be returned to unit.

Following their formation, Popski’s Private Army would go on to achieve great things for such a small number of people involved, becoming more of a brotherhood than a military unit.