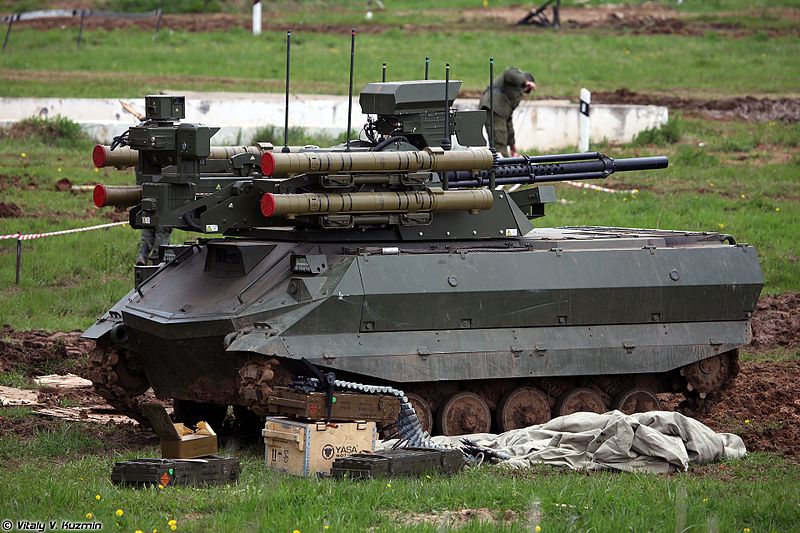 We love a good drone story as you are probably all aware, so when we read about the Russian Uran-9 combat drone – essentially a remote-controlled tank – we got very excited.

Usually, we see drone versions of things and say, “we want an airsoft version of that” or “imagine if we could attach airsoft guns to that, it would be awesome!” Naturally, this was our exact thought when we cast our eyes on the Uran-9. It’s loaded with guns and missiles and looks like it could take on pretty much anything and come out unscathed. But sadly, it doesn’t seem as though that was the case, and by the sounds of it, the Uran-9 won’t be ready for remote-controlled warfare anytime soon!

As we mentioned above, it is essentially a remote-controlled tank that was introduced in 2016. Designed as an unmanned fire support vehicle for the Russian Ground Forces, it is 16.7 feet long and weighs in at around 9 tonnes.

It also has some serious weaponry fitted to it, with one 30mm 2A72 automatic cannons and four 9M120-1 Ataka anti-tank guided missiles. The result is a massive remote-controlled vehicle that is theoretically deadly to troops, light-armoured vehicles and even some main battle tanks.

How Did It Fare?

Not well. Not well at all! One of the most pressing issues was the fact the vehicle could not stray very far from its control station. In fact, it could only be between 1,000 and 1,600 feet from its manned control station. Throughout the entire test, Uran-9 lost contact with its control station a massive 19 times – 17 of these times was for a minute or less, but one case was for over an hour and a half! The problem was only amplified in urban areas with the radio signals being blocked by buildings.

The remote firing system was also a big problem. The 2A72 experienced lag before firing six times and failed completely on one occasion. The optics and sensors were also pretty naff – they weren’t stabilised for shooting on the move, instead, requiring the vehicle to stop first.

Uran-9 also runs on tracks instead of road wheels, but the rollers and suspension that is meant to keep the vehicle running smoothly were rated of low reliability and required constant field repairs. This came as somewhat of a shock considering the fact that Russia has a pretty sizeable armoured vehicle force that uses tracks, including the new T-14 Armata tank. But the contractor for the Uran-9, JSC 766 UPTK, mainly sticks to unmanned systems and clearly didn’t seek any advice from anyone!

Although the Uran-9 failed rather spectacularly, it was not a vital part of the combat operation, and it is much better to identify these flaws now than when it is particularly needed. If Russia can fix the issues that they have experienced, then they will have a rather formidable, unmanned tank on their hands. But now they have to decide if they will persevere with the issues immediately, leave it a while or scrap the project entirely; the Russian ego is something spectacular indeed…

The problems were discussed at a Russian security conference – Actual Problems of Protection and Security – in St Petersburg. We wonder if they looked into the possibility of launching their own RPG drone just like Belarus did?

What do you think of Russia’s failed remote-controlled tank? A mere blip in the road or do they have much more significant problems on their hands? Let us know in the comments below or on our social media channels!

However, it’s probably not the worst ever drone test you’ll ever see… Warning, video may contain gore!

Main image from Vitaly Kuzmin under CC BY 4.0