Situations You Could Do With a Silencer 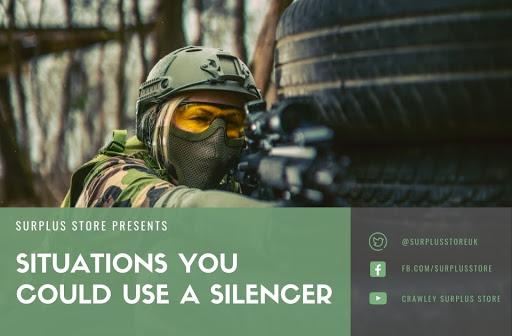 Also known as a suppressor, the subject of using a silencer in airsoft tends to spark controversy. Some airsoft players swear by them and won’t enter the skirmish field armed without one, whereas others don’t feel that they are beneficial.

How you perceive a silencer will depend on your platform and purpose in the field. As airsoft is a replication of real weapons, obviously, the mechanics differ on an airsoft gun, so the effectiveness of a silencer isn’t quite as impactful as you may imagine.

With this in mind, we share the reasons why you might consider a silencer in airsoft and how it can improve player performance. If you are a player that already knows about the reaping rewards of using a silencer, why not take a look at our selection of airsoft rifles in the UK on our website?

The name might be a giveaway, but a silencer's function is to reduce the noise generated from a gun. For real firearms, this works because noise is generated from an explosion of gasses that occur when the bullet’s gunpowder is ignited.

Silencers are great tools to improve your skirmish, naturally they won’t completely silence any weapon, but they will enhance your gameplay by not only looking the part, but also reducing the total noise. The proper name for a Silencer is a Suppressor or Moderator and is known as such in more niche gun circles. But most people know them (slightly wrongly) as a silencer.

Obviously, an airsoft gun isn’t powered like a real firearm, which leads to the question of why they are used?

Unlike AEG, these guns don't rely on an electrically motorised gearbox or other components. Due to this, you may reap some benefits of noticeable noise reduction.

For either type of these airsoft guns, a significant amount of sound is generated from the action of the rifle, situated at the top of the gun where air escapes. Because of this, a suppressor will only have about a 30-40% effect on reducing noise, which won’t be as effective as a suppressor used on a HPA, for example.

Some players like to try and conceal what noise they can for their AEG airsoft gun. Much of the noise produced in an AEG airsoft gun comes from the motor and gears. Noise is also created when the piston hits the front of the gearbox upon firing.

A smaller amount of sound is created from the barrel. However, a silencer can reduce this additional noise and is generally adequate.

An airsoft suppressor is produced with foam that absorbs the noise in the barrel. It is worth mentioning that the noise from the gearbox will continue, though.

Technically, HPA’s fall in the gas gun category because of the pressurized air. As a model, they generally produce around 95-100 dB, which is more than AEG’s, gas pistols and spring guns.

With a HPA kit you can adapt the amount of pressure you want to use in your model, the higher the pressure the more noise the gun will generate, a silencer would drastically reduce the volume of this.

Much of the appeal of suppressors in airsoft is their cool aesthetic. It’s safe to say as airsoft players, we love anything that imitates real guns, and why should this stop with accessories?

It may seem like a superficial reason, but as a fanatic, it is a strong one if you take your collection seriously!

On the other hand, if you have an inner barrel extension that you don't particularly like the look of, a silencer is a great way to cover it and tone down the appearance.

If you are a sniper on the field, no doubt your airsoft rifle is already pretty quiet. If you want to take your position further, you can use an additional silencer to reduce any noise.

It is a valuable bit of kit for snipers as you can remain undercover and confuse other enemy players of where your position is after firing.

Gaming in the Dark

Tracer units are used for games in the dark. They come in the form of a suppressor and essentially illuminate glow in the dark BBs specially created for night time games.

Do you use a silencer on the field? Share your thoughts on silencers with the airsoft community on our social media channels!