A Brief Timeline of the Cold War 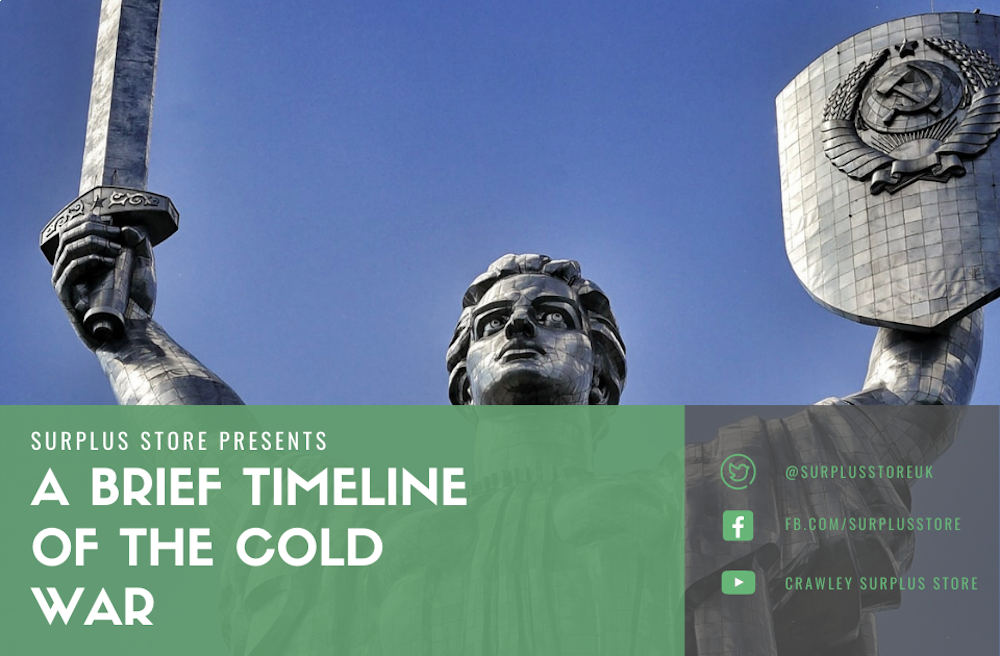 The Cold War was perhaps one of the most complicated ‘conflicts’ in the world’s history. A string of close calls, nuanced threats and one-upmanship pushed the entire planet to the brink of nuclear warfare.

There are so many caveats to this intense story that it’s almost impossible to cover in the required depth. However, if you’re an enthusiast like us and want to understand the ins-and-outs, we’ve put together a handy timeline.

See how the relationship between East and West developed over many decades in our Cold War timeline below!

The UK, USA and other western countries form an allegiance to defeat Nazi Germany. While separate to the allegiance, the Soviet Union’s expansion through Eastern Europe is vital to their success.

The conferences decide the fate of Germany and shape world allegiances after WWII. The creation of a communist Eastern Bloc is allowed on Stalin’s promise of elections, which never fully materialised.

The USA’s major attack led to the surrender of Japan. The Soviet Union was angry at the use of nuclear weapons and being frozen out of the new Japanese administration led by the USA. At the same time, America signals its intention to combat communism across the world.

The apparent betrayal of postwar agreements led to Churchill believing in a renewed threat from Stalin’s communist movement. He delivered his famous ‘Iron Curtain’ speech in the USA, which Stalin likened to a declaration of war.

Churchill’s speech led to a formal military agreement between Western allies known as NATO in 1949.

To combat increasing communist propaganda in Eastern Europe, the USA launched a radio station that reached the region, acknowledging that they are now in ’a war of ideas’.

In response to NATO and the growing Western threat, the Soviet Union created their own communist military agreement in the Eastern Bloc.

Following the death of Stalin, new Soviet leader Nikita Khrushchev delivers the infamous line in a speech to western countries.

Following elections and a need to reduce military costs, the USA created a new strategy to combat the Soviet Union, drawing up plans for large-scale nuclear warfare.

The first significant incident inside the communist bloc, as Hungary seeks to leave Warsaw Pact and return to free elections.

An extremely violent response from the Soviet Union saw the revolution fail, but the response disillusioned many states along the Eastern Bloc’s fringe from communist rule.

As a means of displaying either side’s ability to fire missiles across the world, the USA and Soviet Union develop spacecraft.

Castro and Guevara overthrew the Cuban dictatorship and developed a new period of nationalisation.

After they began purchasing weapons from the Eastern Bloc, the USA financed a failed attempt to overthrow them, which led to Cuba openly accepting a friendship with the Soviet Union.

Tense negotiations between the two sides led to nuclear weapons being returned to the Soviet Union in return for the de-escalation of US weapons in Europe.

Soviet Union secret forces removed leader from his position of power, calling his rule an embarrassment and blaming him for nearly causing nuclear war.

Hostile relationships cool slightly due to economic difficulties for both sides. Incidents flare up in third-party countries, including China, Vietnam and Afghanistan.

A downward spiralling Soviet economy leads to more of the Eastern Bloc opening to foreign investment and relations.

Growing relations between the Eastern Bloc and Western countries led to a string of uprisings from Soviet States, eventually leading to the dissolution of the Soviet Union in 1991.

Despite the dissolution of the Soviet Union, many experts suggest that the Cold War never truly ended. Instead, the conflict has evolved as new world powers, ideologies, and threats emerge.

The Cold War is a hugely interesting event in humanity’s history! Here at Surplus Store, we’ve covered some of the conflict’s key events in-depth, along with many other huge battles in our blog!

If you’re partial to some military games of your own, we have a wide range of equipment available, including airsoft BB guns, rifles, clothing and more - everything you need for a day on the field!