A Guide to Choosing Your First Airsoft Gun 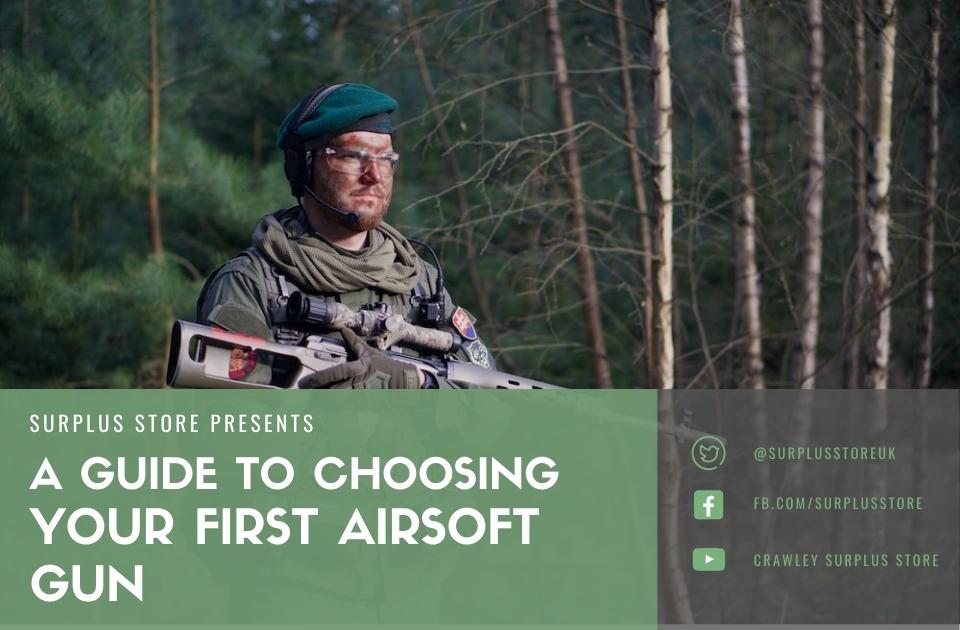 Advanced airsoft players will no doubt remember buying their first airsoft gun. It’s a big moment, and if you’re unsure of what you are looking for, it can be a complex one too!

As one of the top sellers of airsoft guns in the UK, here at Surplus Store we are often asked similar questions from first-time buyers! With many years of experience in the industry, we offer our best advice for new airsoft players who are ready to purchase their first gun!

Think About What You Need

Thinking about what you need is easier said than done, as you won’t know what you need from a gun until you have a few games under your belt, but there are several things to consider.

You don’t have to follow what your friends prefer as everyone varies in style and preference. Think more about what you feel comfortable using when firing, what makes playing airsoft enjoyable and how you like to play.

However, having a teammate running the same setup as you makes running out of ammo mid-game easier. They can loan you a mag rather than a bag of BBs which you’ll have to reload in the line of fire!

Short-barrelled rifles (complete with a plastic body) are often recommended for beginners who are unsure of what to choose. Lightweight design and a good plastic body (good plastic is better than low-quality metal) are excellent for less experienced players.

High capacity magazines (available for your chosen rifle) and the rifle being capable of full-auto fire (when you pull the trigger it keeps firing until you take your finger off the trigger) is a big plus for the beginner.

Once you’ve played a few games the single-shot takedown is a beauty, but when you’re first beginning short controlled bursts make the game a lot more forgiving!

Your Role in the Game

You may also want to consider your role as a player in the airsoft game. As an entry-level gamer, it is unlikely you will be a tactical officer or a leader.

Most games, as a beginner or a more advanced player, you’ll be playing as a rifleman pure and simple!

Price tends to be the ultimate decider of most purchases we make in life, and airsoft guns are no different.

Ideally, you don’t want to blow big money on one of the top guns if you’re unfamiliar with its advantages (unless you have extra money you don’t mind spending and possibly wasting).

Not Too Expensive and Not Too Cheap

Although, at the same time, don’t go too cheap! There are exceptions, but a cheap gun may work in the shop and sound great. However, the minute you get it out onto the range, it may not be able to hit the side of a barn.

The cheaper you go, the more likely you are going to have to look at upgrading or altering your rifle to make it worth using, this does not make for a great starter rifle!

Most suitable guns for beginner levels range between £100 to £150 and as you progress, you will most likely look into customising and upgrading your models.

Snipers are not recommended for those just starting.

Firstly they are not the choice of gun for those who are on a budget. Sniping is not cheap and will require more funding than other airsoft guns as they tend to be ‘built’ rather than bought, and this will become more apparent the more you play.

Not only is it expensive to purchase a sniper, but other airsoft guns and models will be more beneficial to you as you learn the ropes; dropping all your money on a sniper rifle will hinder your progress as well as empty your wallet. Try not to run before you can walk.

A Brief Overview of Technical Elements

There are some technical aspects of airsoft guns you should know about as you research your first purchase.

Take a look at our basic overview below:

Both FPS and MPS are the measurements of the speed that the BB is released from the barrel.

FPS is Feet Per Second and MPS is Meters Per Second.

In general, a model with higher FPS is regarded as having more power, and will no doubt leave some severe bruises on a hit target!

For the UK sites, an upper limit of 350 FPS is in place, so look for something that fires at 300-340. Make sure you check when you buy as if you go to a game with an airsoft gun that is over 350 FPS they won’t let you play with it and you might forfeit your game fee!

A lot of people think that higher FPS and MPS equals long range, but a gun’s ability for long-range shooting depends on the quality of it’s Hop Up.

Hop-up is where your range and accuracy come from. It refers to the system which puts a backspin onto the BB that allows for much longer range than without. On every rifle that we would say is a good enough starter rifle, you will have adjustable hop-up.

To get the best range and accuracy, experiment with your hop-up:

ROF is the Rate of Fire and refers to the quantity of BBs which can be released in a set amount of time when firing in fully automatic mode.

In theory, the more BBs released should increase the chance of hitting your target. However, it will also require more consistent ammo top-up! Make sure you keep to short controlled bursts. As a rough guide, one-second maximum trigger pulls make for a friendlier game! Unless you’re playing as a support gunner, but that’s a whole different story!

Research the Types of Airsoft Gun

The more research you do prior to purchasing, the better! There are various mechanisms in airsoft guns, including:

Firing mechanisms recommended to beginners tend to be AEGs powered by NiMh or LiPo batteries.

Another area of consideration is upgrades and replacements. AKs and M4s tend to be the airsoft guns with the most accessible upgrade parts, which makes them a popular choice as they are convenient and affordable to maintain.

If you are ever unsure of the direction to take, get in touch with an expert!

Here at Surplus Store, our experienced team love to help you out when it comes to choosing the right gun. We’re always on hand to point you towards a gun that will offer you the most enjoyment; call us today and discover how we can help you!