5 Military Tactics for Your Airsoft Team 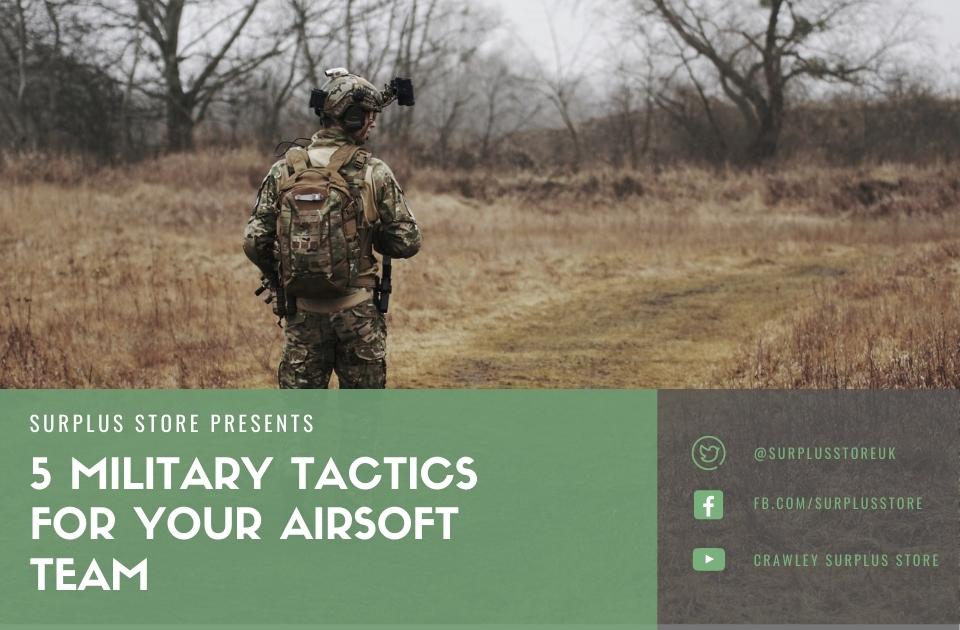 If you’re serious about airsoft, you’ll already know the value of teamwork. One of the most satisfying things about the game is when you manage to pull off your newest strategic manoeuvre without a hitch.

Tactics and strategies used by the military are obviously a great place to draw inspiration from when it comes to your next game. To make sure you’re primed to win, why not check out our selection of airsoft guns?

We’ve put together a quick list of military tactics that you can employ in your next airsoft battle that are sure to crush your opponents and give your team sweet victory!

The Benefits of Using Military Tactics

Basic military tactics can give you a starting point before you can begin coming up with some new ideas and strategies that are suited for your team specifically.

Essentially, this artillery tactic means that you fire at your target before immediately moving away from the location where you have just fired. It’s pretty simple stuff and can be adapted to the airsoft battleground easily.

When you make your attack, and your position is revealed, don’t remain stationary. Instead, move from your position to prevent your enemies retaliation from raining down upon you!

If your opponent notices your movements, it may be worth doubling back without being caught and reusing your original location to trick them into thinking you’re somewhere else.

This is another basic tactic that is used by the military when faced with an enemy and under fire. This strategy makes use of cover and the coordination of the team.

This has been a standard tactic throughout military history and is sure to see your team on the road to victory!

Envelopment is a military tactic that is used when units need to close in on an enemy. Rather than a full-frontal assault, units will exploit the enemy’s flanks from multiple directions.

The US Army utilises four versions of the envelopment manoeuvre:

• The basic flanking manoeuvre: effective at containing opponents in defensible spots.
• The pincer movement: two flanking manoeuvres at the same time.
• The encirclement strategy: the enemy is completely surrounded and isolated.
• The vertical envelopment manoeuvre: troops are air-dropped to attack the enemy’s flank and rear (this one might be a little tricky in your airsoft game!)

If your team manages to pull off one of these strategies in an airsoft battle, it can be pretty satisfying!

This tactic involves smaller units breaking off from the main force to execute a specific mission before returning to the main group. In real combat, these kinds of patrols can range from a couple of hours to several weeks, depending on the objective.

You can use this tactic in airsoft to collect information on your opponent and report back to the squad leader.

This is a basic tactic that ensures individuals don’t move towards the enemy or across terrain too close together. When players or real troops stand too close together, they can become more vulnerable as a few shots or a grenade can take the whole group out.

To make sure this doesn’t happen, keep a good distance between you and others on your team. This way, your enemy won’t be able to take advantage and wipe out big chunks of the squad.

May the best team win! Do you have any tactics you’d be willing to share? Comment below or on our social media to join in the conversation.