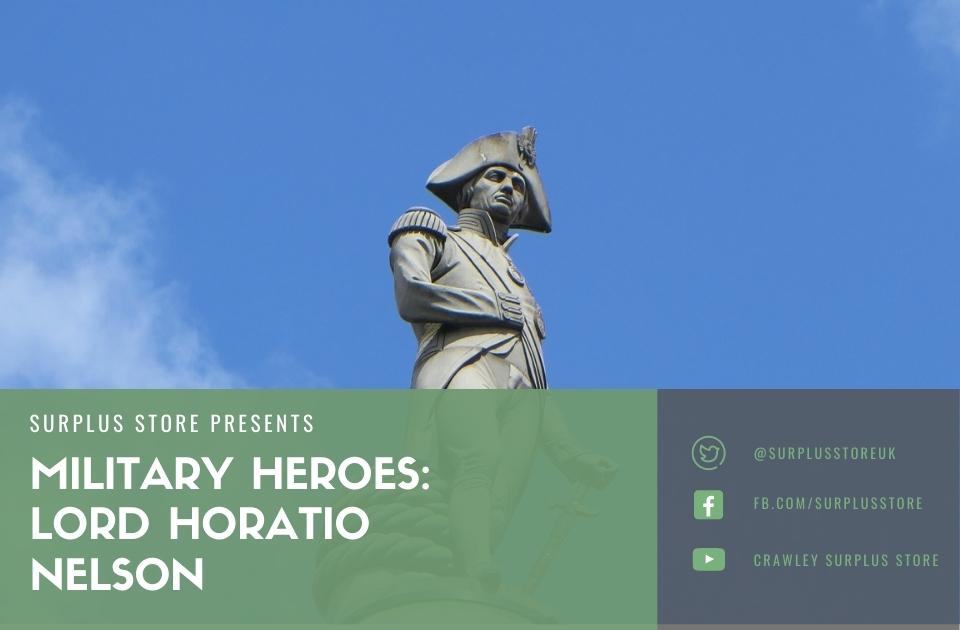 Horatio Nelson is presented as a controversial character in both his personal and professional life. Nonetheless, he is regarded as one of England’s most influential military leaders, dedicated to ensuring British victory during the Napoleonic wars.

His victories are extensive, and below we provide a brief overview of his career and life in celebration of our Military Heroes series!

If you’re preparing for your next battle on the airsoft field, why not take a look at our extensive selection of airsoft BB guns!

Nelson was a flag officer in the British Royal Navy and was awarded many titles and promotions throughout his heroic career, including 1st Viscount Nelson. Now, he is commonly referred to as Lord or Admiral Nelson.

He is mainly commended for his strategic leadership during the Napoleonic Wars. His death during the Battle of Trafalgar made his already famous existence truly unforgettable.

Introduction to the Navy

Nelson began life as one of the eleven children of a Reverend in Norfolk on 29th September 1758. His family were relatively affluent and his uncle, Captain Maurice Suckling, had ties in the Navy as an established and highly-ranked naval officer.

Nelson's uncle introduced him to the Navy, and by the time he was 20, he was presented his own command where he fought in Canada, the West Indies and the Baltics.

During the French Revolutionary Wars, Nelson was a prominent figure in the 1794 capture of Corsica, which is the location where he lost the sight in his right eye when hit with the grit from a cannon shot. In 1797, he would go on to lose his right arm during the Battle of Santa Cruz de Tenerife.

Some of Nelson’s most commended combats included the Nile, Copenhagen and his final battle in Trafalgar.

Each battle featured a noticeable difference in tactics that helped obtain Nelson’s status as a versatile and tactical commander.

In a brief overview, Nelson’s defeat of the French fleet during the Nile won him the honour of ‘Baron Nelson of the Nile and Burnham Thorpe’ from King George III in 1798. He was responsible for the capture and destruction of 11 of the 13 French ships leaving the isolation of Napoleon’s armies in Egypt.

Copenhagen is the setting of one of Nelson’s boldest moves. In 1801, Nelson reportedly defied the orders of Admiral Sir Hyde Parker who instructed them to withdraw the opposing Danish fleet. Nelson famously pulled a telescope to his blind eye and replied he couldn’t see the signal. The battle ended in a truce with the Danish fleet in Copenhagen.

Upon his arrival to England, he became the Viscount Nelson of the Nile.

The Battle of Trafalgar

Arguably one of Britain’s most significant battles in its naval history, the Battle of Trafalgar was a bloody war between the combined fleets of France and Spain and the British Royal Navy in 1805.

Nelson organised his naval fleet into two divisions. It was this battle where Nelson was recalled to signal the famous ‘England expects that every man will do his duty’ from his flagship HMS Victory.

The British Navy succeeded in diminishing the threat of invasion by Napoleon but unfortunately ended with the tragic death of Nelson.

Nelson was sadly shot by a French sniper in the shoulder during the battle. The musket shot damaged two ribs and ripped his left lung, which also severed an artery.

Taken below deck for medical care, unfortunately, nothing could be done to save him, and he died three hours later from the single shot.

There are various versions of Nelson’s last words upon his death. He is perhaps most famously reported to have said the phrase ‘Now I am satisfied. Thank God I have done my duty.’ upon hearing that Britain achieved victory just before he died.

For his return to England, his body was preserved in brandy, and Nelson received a state funeral at St Paul’s Cathedral, where many attended in his honour in the streets of London.

Many felt despair after his death, as he had continuously protected his country right to the end. Earl St Vincent is said to have stated after Nelson’s death, ‘I was prepared for anything from Nelson … but not this!’

Much of Nelson’s controversy outside of his career stems from his scandalous relationship with Lady Emma Hamilton, which received much attention at the time. It is still a notable aspect of his life today.

Both Nelson and Hamilton have been described as ‘self-made celebrities’ of their day. They first met in Naples, Lady Hamilton’s home with her first husband Sir William Hamilton, the British Envoy to Naples in 1793. They reportedly became inseparable in a romantic sense after their second meeting in 1798 following Nelson’s success at the Battle of the Nile.

At the time of meeting Nelson, Lady Hamilton was 28 years old, seven years younger than her lover. She was famed for her beauty and favoured as a model for artists in high society; her performances known as ‘attitudes’ at the time were also famous. ‘Attitudes’ were developed by Lady Hamilton and were essentially a form of mime which reflected the poses of paintings and sculptures.

Already married to Fanny Nisbet, Nelson’s decision to leave his wife in favour of living with Lady Hamilton was followed by the resolution to give Fanny half of his income. He never saw Fanny again after this exchange, but some feel that his decision to offer money was ahead of his time.

The love between Nelson and Hamilton was strong and passionate, both regarding each other as their soulmate. Nelson didn’t keep the affair secret, and openly attended events together and eventually lived in a separate property at Merton. The two were delighted by the birth of their daughter in 1801, who they named Horatia.

Their association with one another put their social status at risk, along with the public’s perception. Regularly scrutinised for their behaviour, some condemned their actions, whereas others loved to discuss it. Either way, they were famous for their love.

What happened to Lady Hamilton?

Sadly Nelson’s death in 1805 put an end to their relatively short romantic relationship. Emma received little money after Nelson’s passing, despite his instruction for Emma and their daughter to be looked after by the government. By 1812, Lady Hamilton was in millions pounds worth of debt. She was imprisoned in 1814 for her debts and, once released, eventually died in 1815.

Nelson is recognised today as one of Britain’s most celebrated military heroes. The combination of his successive victories and death during the Battle of Trafalgar has secured his name as one of the ultimate British military leaders forever.

Nelson has featured in art, literature, music and monuments across the centuries. One of the most distinctive references that captures Nelson’s military impact was by Lord Byron, who named Nelson ‘Britannia’s God of War’ in his poem Don Juan.

Trafalgar Square, London, is home to one of his most well-known commemorations; Nelson’s Column. It was finally constructed in 1843 and the idea was supposedly inspired by the Augustus’s Temple of Mars Ultor.

He will forever be remembered for acting boldly and courageously despite orders and as a protector of the British Empire.

Hopefully, we have provided you with a brief overview of Nelson’s life and achievements. Who are your most influential military leaders? Why not share your thoughts with the airsoft community and us on our social media channels?