A Brief History of Archery 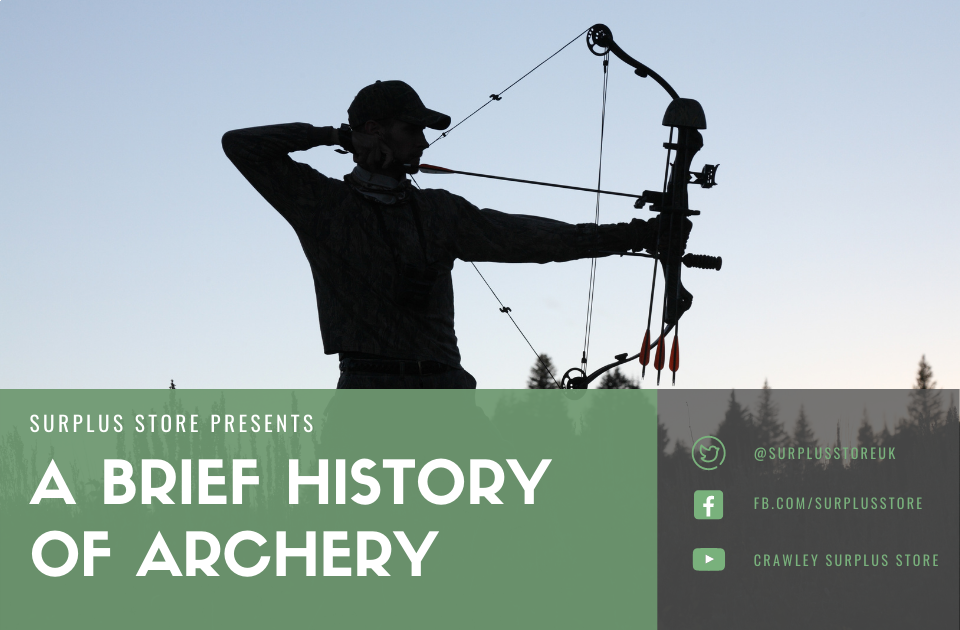 The evolution of archery begins at the start of mankind’s history; it is one of the oldest arts that is still practised today. Since its origins, archery has been used for hunting and combat.

The History of Archery

The oldest found stone arrow points were made in Africa 64,000 years ago. Because of how heavily past civilizations have relied on archery since the day of its existence, arrows and bows have increasingly improved.

Ancient civilizations would use a large number of archers in their armies to fight against mass formations of infantry and calvary. The armies that fought with better-crafted bows and arrows would often win and expand their empires.

Ancient Egyptian culture utilised archery, even before dynasties appeared. At around 3,000 BC, archery was adopted and used for hunting and warfare purposes.

The earliest evidence of archery in China dates back to the Shang Dynasty, 1766 – 1027 BC. War chariots from this era would consist of a driver, lancer and archer. Throughout the Zhou Dynasty, from 1027 – 256 BC, archery tournaments were attended by nobles.

Archery was introduced to Japan by the Chinese in the sixth century, which went on to influence their culture. Kyudo is the Japanese martial art of archery – it is practised for physical, spiritual and moral development.

A kyudo bow is 2.21 meters long and made from laminated strips of bamboo. After certain rituals, a kyudo archer would step onto the shooting line to aim at a 36 cm wide target that is 28 meters away.

Once firearms began to appear, archery skills started to dwindle. Early firearms were slightly inferior in terms of rate-of-fire when compared to bow and arrows, and they could rarely be used in wet weather, but firearms had a longer range and were tactically superior.

Firearms required less training, so highly skilled archers started to become a rarity as they were no longer needed. But archery began to revive in 1688 when Britain began to practice it as a recreational activity.

How Archery Became a Sport

During the 19th century, archery became recognised as a recreational sport. The first Grand National Society meeting was held in York in 1844. Over the first ten years, strict rules started to take place which have since defined it as the sport that is today included in the Olympics.

From the 1920s, engineers became interested in archery and started to design different types of bows, such as recurve and compound bows.

Archery at the Olympics

Archery was originally introduced in the Olympics in 1900, and the sport was contested again in 1904. Since 1904 archery allowed women to compete; it was the first sport to include events for both genders.

the games continued in 1908 and 1920, however, it was then not reintroduced until 1972, with separate events for men and women.

The most decorated archer of the Olympic games is Hubert Van Innis, from Belgium, who has won six gold medals and three silvers in 1900 and 1920.

There are many different types of bow, and each is built for a particular purpose.

A recurve bow is currently the only style of bow which can be used in the Olympics. Its name is adopted from its shape – most bows bend toward the archer, whereas the tips of a recurve bow will bend away from them.

Because of the anatomy of its curvature and how it reforms once the arrow has been fired, its shape offers much more power and speed.

Compound bows consist of a cam or pulley system at the top of the bows limbs which will aid archers when they draw their bows. Because of this system, the stored power in the limbs will transfer to the string and arrow on release.

The compound bow’s system will give the archer a much more powerful shot with much less effort, as well as aid their ability to draw the bow for a much longer period of time.

Crossbows are a fusion between a firearm and bow in the sense that it is held more like a rifle. The arrows of a crossbow are called ‘Bolts’. The crossbow’s mechanism allows the string to be held back until the trigger has been pulled.

The most common type of crossbow is held in both hands and will rest into the shoulder when firing. There are small crossbows, which are referred to as ‘pistols’ and are designed so that you can hold and fire them with one hand.

Because of an increasing interest in survival as a hobby and people generally wanting to prepare for the worst, a specialist type of bow has evolved, the survival bow.

Usually, this bow is light and has a compact takedown or folding system which is easy to assemble and take down. It can even sometimes store arrows within the body.

A traditional type of bow is the longbow; one of the most widely recognised is the English longbow. The English longbow was usually crafted from yew or wych elmwood. Much more modern longbows are made from laminating different materials together to aid the bow’s lightness and strength.

The limbs will usually span the archer's height. The limbs are not recurved, giving it a much more recognisable D shape. From the 14th century, the longbow was the favoured weapon by English soldiers until the invention of firearms.

If you’re interested in archery or you would like to stick to your usual air arm or air rifles, you can check out our extensive range available here at Surplus Store. If you would like more information about archery, air rifles or even airsoft, you can take a look at our blog!